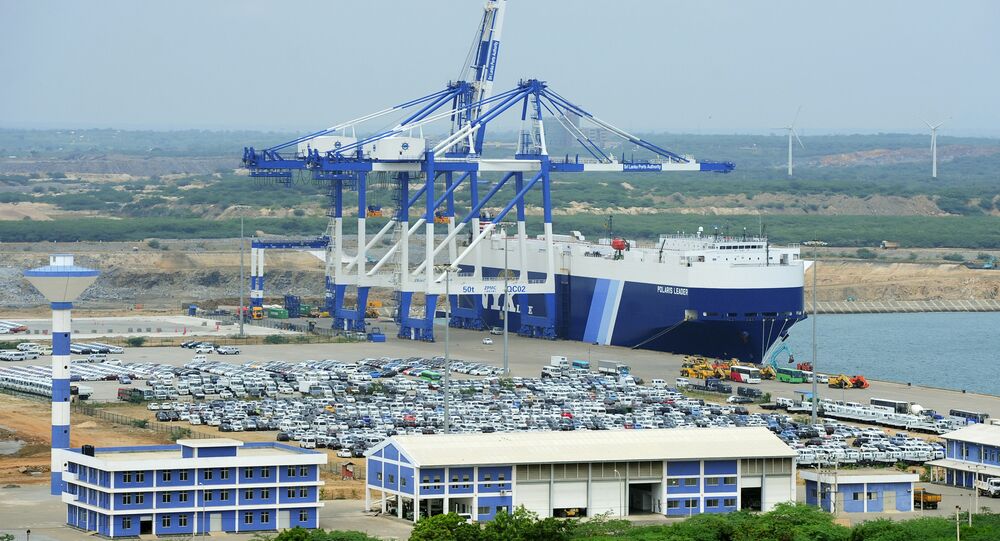 Sri Lanka’s handing over of its strategic Hambantota port to a Chinese state-owned company has increased the chances of the two Asian giants engaging in a more intense power-struggle with “unexpected consequences,” in the Indian Ocean Region, according to former national security advisor.

New Delhi (Sputnik) — India's Former National Security Advisor (NSA) M. K. Narayanan has cautioned that the differences between India, China are likely to deepen in the near future and the consequences could be unexpected.

"China's taking over of Hambantota port in Sri Lanka, Gwadar port in Pakistan and setting up of a naval base in Djibouti [in Africa] and intent to increase such presence will only lead to worsening of relations between the two Asian giants," Narayan asserted while addressing the international symposium "India-China relations — Resolving Contentious Issues" in the eastern Indian city of Kolkata.

"I don't say there will be a war but there will be constant conflict," Narayanan, who is also a former chief of the country's Intelligence Bureau, warned.

Differences between India and China are likely to deepen and the Doklam standoff was not a one-off incident, former National Security Adviser MK Narayanan said on Friday and cautioned that the differences may lead to "unexpected consequences".https://t.co/M6AlfhtVaB (1/2)

While responding to a question about  Sri Lanka handing over Hambantota port to China on a 9-year lease, Sitharaman said, "Not sure if I'll comment on any one particular instance. But yes, we are being watchful of all the developments in the neighborhood."

Not sure if I'll comment on any one particular instance. But yes, we are being watchful of all the developments in the neighbourhood: Defence Minister Nirmala Sitharaman over question of handing over of Hambantota port to China by Sri Lanka on 99-year lease pic.twitter.com/7TV18ZKcNE

Sitharaman said this while chairing a high-level meeting on the implementation of "New India Vision 2022" in Tamil Nadu last week. The vision basically focuses on Modi's long-term Indo-Pacific strategy.

Experts are of the opinion that China's activities will not only be confined to Sri Lankan ports but much beyond that, and it is indeed a challenge for India to catch up.

"India, in fact, needs a better plan to counter Chinese presence in Sri Lanka. China has plans to invest $5 billion during the next 3 to 4 years in the new economic zone in southern part of Sri Lanka. Therefore, obviously, China has a diverse interest in Sri Lanka which includes infrastructure projects and other major economic activities. China's growing footprint in Nepal, Pakistan, Myanmar and Sri Lanka is basically its plan to encircle India," Srikanth Kondapalli, Professor of Chinese Studies at Jawaharlal Nehru University, told Sputnik.

Another analyst, Abhijeet Singh, also opines that competing with China in the Indian Ocean Region would be no cakewalk for India.

China’s planned ports and facilities in the Indian Ocean then constitute a network of logistical centres and power-projection nodes, under the clear control of Chinese authorities. India still has some distance to go, before it begins to compete with China in the IOR (9/9)

The views and opinions expressed by experts in this article are those of the speakers and do not necessarily reflect the position of Sputnik.

India-China Bonhomie is Back on Track - Indian Army Chief