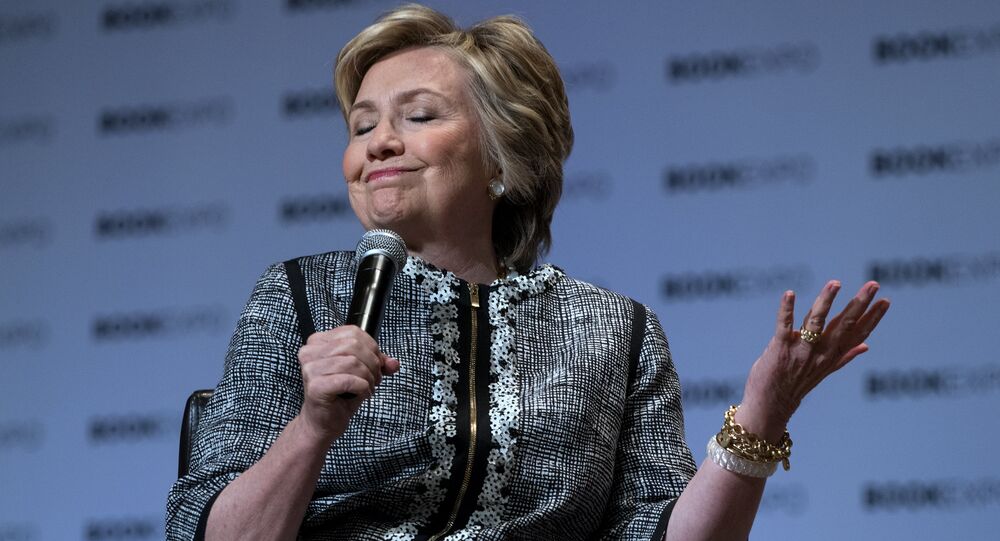 Some of the newly discovered messages indicate that the decision not to charge Hillary Clinton over the misuse of her private email server was made by the FBI well before the case was properly investigated and before she was ever interviewed.

Radio Sputnik has asked Charles Ortel, Wall Street analyst, philanthropy law expert and a vocal critic of the Clinton Foundation to share his thoughts about the current release of information regarding this story.

Sputnik: Why did the FBI open a fresh inquiry into Hillary Clinton’s private emails in November 2016 after closing it a few months before?

© AP Photo / Patrick Semansky
Hero or Zero? Hillary Clinton Likely to Campaign for Democrats in 2018
Charles Ortel: We don’t really know exactly why, but if we go back to the FBI and punch in “Abedin,” “Laptop” and “Affidavits” you’ll get an actual request for a search warrant because Abedin, a close friend and associate of the Clintons’ who was at the time still married to the disgraced pervert Anthony Weiner and basically handles a lot of delicate matters involving Hillary Clinton. The NYPD apparently recovered a laptop which appeared to contain all sorts of suspicious emails. The New York branch of the FBI sat on that laptop. The New York cops were apparently serious about doing something about it. I believe [James] Comey and the FBI were pressured to get that laptop. They got the laptop on the 27th of October, less than two weeks before the election, and miraculously managed to conclude in a short period of time that there was nothing incriminating on that laptop. We’ve seen that with our own eyes. Go to the FBI files and you will see what I’m talking about. So we had a situation leading up to the election where a line of people in the FBI and in the government didn’t really like what they were seeing, whereas others who had seen how the Clintons operated when Bill was president and had seen how the Clintons had managed to escape justice for abuses of power that came to light after he had left and imagine just how aggressive Hillary might be had she won.

Sputnik: Do you believe this is a case where the ongoing “Russiagate” scandal was used to overshadow the clear case of misappropriation carried out by Hillary Clinton?

© REUTERS / Carlos Barria
Trump Calls for Faster Release of Clinton Emails, Uranium Deal Investigation
Charles Ortel: It’s a case when you accuse your enemy of doing exactly what you are doing to get them off the scent. […] Here we have a situation where elements inside this country, either good or bad, just as there are good and bad elements inside every country, including Russia. We don’t know yet who was conspiring to help the Clintons, and help the Obamas inside Russia and who may be happy inside Russia with the Trump administration. We don’t know that yet. But from the records out there we do know that John Podesta, the campaign chairman for Clinton, a former chief of staff during the crucial ten years of the Clinton presidency when so much crime and corruption was covered up, we know that that man was  part of a sweetheart deal with something called “Jewel Unlimited,” and they failed to disclose the true economic [details] of that deal during the 2016 campaign. We also know that the Clintons were very much involved with a project outside Moscow, something like Skolkovo, and we know that all kinds of deals happened in the first term of the Obama administration. We need to unscramble all those deals to figure out who was giving money to Clinton’s campaign […] and that the people who broke American laws need to be investigated, prosecuted, convicted and sentenced.

For more information listen to this edition of Weekend Special with Charles Ortel.