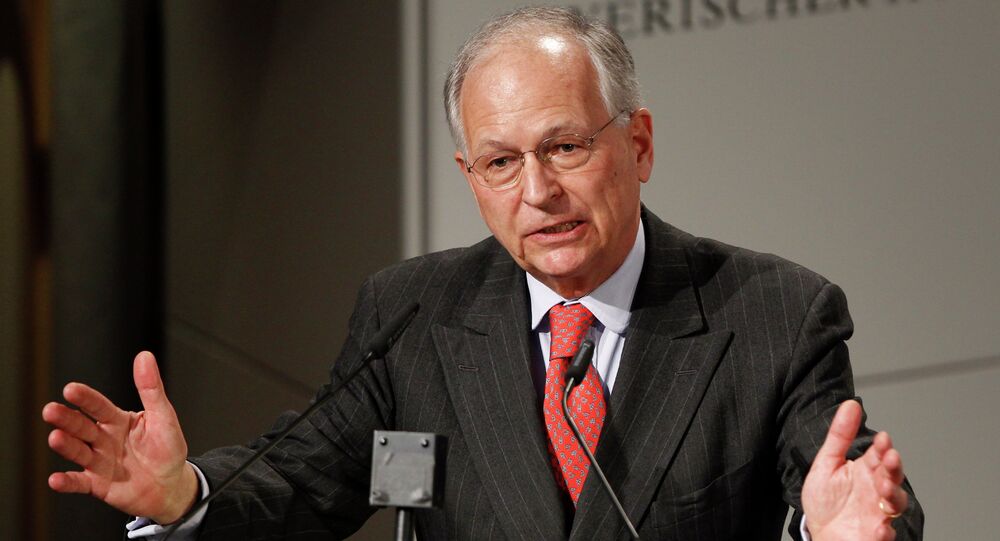 MOSCOW (Sputnik) – Wolfgang Ischinger, the chairman of the Munich Security Conference and prominent German diplomat, urged the international community in an interview with Sputnik to exercise "strategic perseverance," as well as called for the revival of the so-called Helsinki process.

In his interview with the German Internationale Politik magazine, published on January 10, Ischinger said that Russia was not interested in normalizing its relations with the West, unlike the Western countries. However, in the interview with Sputnik Deutschland the official said that Russia must be interested, particularly, in the preservation of the Intermediate-Range Nuclear Forces Treaty (INF Treaty), and was making efforts in this direction.

"Strategic perseverance only means that if consensus is not reached this spring, it will be reached in fall 2018. And if not in fall 2018, then, perhaps, by 2019. One should not give up. It is one of the lessons we have learned from the so-called Helsinki process," Ischinger said.

The official referred to the words of his then chief Hans-Dietrich Genscher, who had held positions of West Germany's interior minister, as well as foreign minister and vice chancellor of West Germany and then of the reunified Germany, and head of the Organization for Security and Co-operation in Europe (OSCE).

"Hans-Dietrich Genscher has said that we will not rise from the [negotiating] table, even if others rise; maybe they will stay at the table, too. That is what I am talking about now," Ischinger pointed out.

© REUTERS / Jonathan Ernst
Munich Security Report Forecasts New World Order if US Changes Tack
Political will, desire not to offend any party, and fear of losing face were among the important factors of the Helsinki process’ success, Ischinger pointed out. The negotiations leading to the Helsinki Final Act signing in 1975 were difficult and faced a lot of tensions and contradictions. Still, the parties managed to reach consensus, the official noted.

Conclusion of a document, similar to the 1975 agreement, might be possible today, Ischinger stressed.

The INF Treaty is currently "under fire" because both Moscow and Washington accuse each other of violating it, the official continued.

"I would like to raise the question, whether the Russians and the Americans, and of course, the Europeans are interested in this treaty not only staying in force, but being updated and extended. I believe, Russia would be very interested in India, China, and other nuclear countries joining the obligations to abandon certain types of weapons. In my point of view, if we approach such issues with enough creativity, we might perhaps find the areas in which the US side and Russia, and we, Europeans, would be able to identify common interests, which deserve joint talks," Ischinger pointed out.

It is the creative approach, which allowed overcoming mistrust between the West and the East and signing of the Helsinki Final Act, one of the main achievements of the international diplomacy, the official noted.

Asked about possible Germany’s role in such talks between Russia and the United States, Ischinger said that Germany should be more active on the international arena, because over the past years it had been relying on the US military capabilities and protection, without ensuring its own security.

© Sputnik / Alexander Vilf
Gorbachev Urges Putin, Trump to Resolve Dispute Over INF Treaty
Ischinger called on Germany to strengthen stability across the European Union, instead of just "watching hopelessly, like it has been during the Bosnian War in the 1990s."

"Over the past five years, we have been hopelessly watching what has been going on in Syria until [Russian Foreign Minister] Sergey Lavrov and [US ex-State Secretary] John Kerry convened a conference [on the Syrian conflict settlement]. This is unworthy of 500 million Europeans. So we need to grow up a little and emancipate ourselves in the issues of security policy. It does not mean becoming more aggressive, but becoming more active, doing more and developing our own skills," Ischinger pointed out.

The 1987 INF Treaty outlines destruction of ground-launched ballistic and cruise missiles with ranges of between 500 and 5,500 kilometers (311 to 3,317 miles), their launchers and associated support structures and support equipment. The United States and Russia have repeatedly accused each other of violating the treaty.

The Helsinki Final Act was inked by 35 nations at the conclusion of the first Conference on Security and Co-operation in Europe (CSCE), held in the Finnish capital, in an effort to normalize the relations between the West and the Communist bloc. The non-binding agreement covers a wide range of international issues.