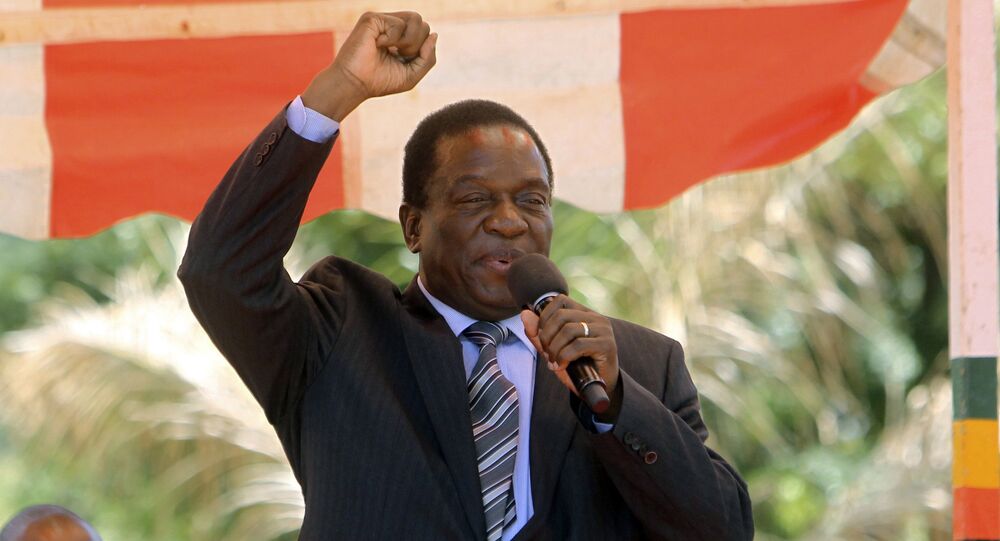 The successor to Robert Mugabe as president of Zimbabwe, Emmerson Mnangagwa, is a "Zanu-PF stalwart" who is faced with the tricky task of maintaining the support of the military while implementing economic reforms in a country with 90% unemployment, Dr. Ciara McCorley, Research Fellow with the University of Sussex, told Radio Sputnik.

Zimbabwe's former vice-president Emmerson Mnangagwa has returned to the country in preparation to be sworn in as Robert Mugabe's successor on Friday, local media has announced.

The 37-year reign of President Mugabe came to an end when the 93-year-old resigned on Tuesday, under pressure from the military which seized power last week. The military leadership acted after Mugabe fired Mnangagwa on November 6, a move which was seen as an attempt to pave the way for Grace Mugabe to succeed her husband as leader of the Zanu-PF party and President of Zimbabwe.

Dr. Ciara McCorley of the University of Sussex, a specialist in international development with an interest in African political economy, told Radio Sputnik that Mnangagwa, 75, a veteran of Zimbabwe's liberation movement, is a "Zanu-PF stalwart" with very strong links to the military and Mugabe's system of government.

"International actors might find Mr. Mnangagwa a little bit more palatable to deal with than Mugabe was, otherwise things are probably going to be the same," McCorley said.

© REUTERS / Philimon Bulawayo
WATCH: Zimbabwe Celebrates Robert Mugabe's Resignation
Sputnik: Let's say Mnangagwa takes charge with a clear perspective on what needs to be done; what actual practical steps should be taken to take Zimbabwe out of the economic abyss?

Dr. Ciara McCorley: Currently, Zimbabwe has got 90% unemployment so that's going to be difficult for anyone to address. Mnangagwa has military support, for the longest time the military has supported the government of the day through clearing its coffers.

The question I would ask of Mnangagwa is whether he is able to move the economy from its current doldrums whilst also still retaining military support, or are we going to see military backhanders? Is Mnangagwa going to lend that economic support to the military that the government traditionally has done?

Sputnik: Analysts have been predicting that the political turmoil in the country began because Mugabe saw his wife as a successor instead of Mnangagwa. Does that hold any water?

Dr. Ciara McCorley: Absolutely, the power crisis in Zimbabwe has been going on for years, since the mid-2000s and everyone has been waiting for him to die. The problem with Mugabe is that he's been very slow to indicate a successor. The fear has been developing very rapidly that he would name Grace Mugabe [as his successor] and she'd be the one to get into power and that would create a Mugabe dynasty which might be problematic.

She has very clear power aspirations, she has no link with the liberation struggle and this was very difficult for the old-school party supporters to take in. Obviously, the military have no loyalty to Grace either.

© REUTERS / Siphiwe Sibeko
Zimbabwe Welcomes Resignation of President Mugabe With Hopes of Bright Future
Sputnik: What do you think is going to happen to Mugabe now? Is he going to be exiled somewhere or is he going to stay in the country?

Dr. Ciara McCorley: He's now a former president, he's going to be accorded the privileges and protections that are due to all of the ex-presidents. His former subordinates have an incentive to ensure that their predecessor is treated with respect, because they will want to be treated with the same respect as Mugabe is treated with.

Mugabe spent a lot of time in Malaysia when he was sick, the chances are he's going to spend a fair amount of time there. It's very difficult to say whether he's going to remain in Zimbabwe.

Sputnik: What do you think about the rumors that the military has agreed to demands from Mugabe such as granting him and his wife immunity, preserving his private property etc.?

Dr. Ciara McCorley: Mugabe and his family have wealth squirreled away everywhere, nobody really knows how much they're worth. If the military decides to grant him immunity, certainly he'll be able to keep his wealth in Zimbabwe but they've no idea what's happening elsewhere.

Even if they take away the immunity, Mugabe's still going to be extremely wealthy. But the interesting thing is that Mugabe could now be exposed to legal actions which he's never had to face during 37 years in power.

His family has had immunity because he was in office. Now he doesn't have that same power, they are going to be exposed and people can approach the courts with much more confidence.

It's going to be interesting whether Grace will now face legal action for the assault of Gabriella Engels in South Africa, because the new government may not decide to uphold the diplomatic immunity that she was granted after allegedly assaulting this woman.