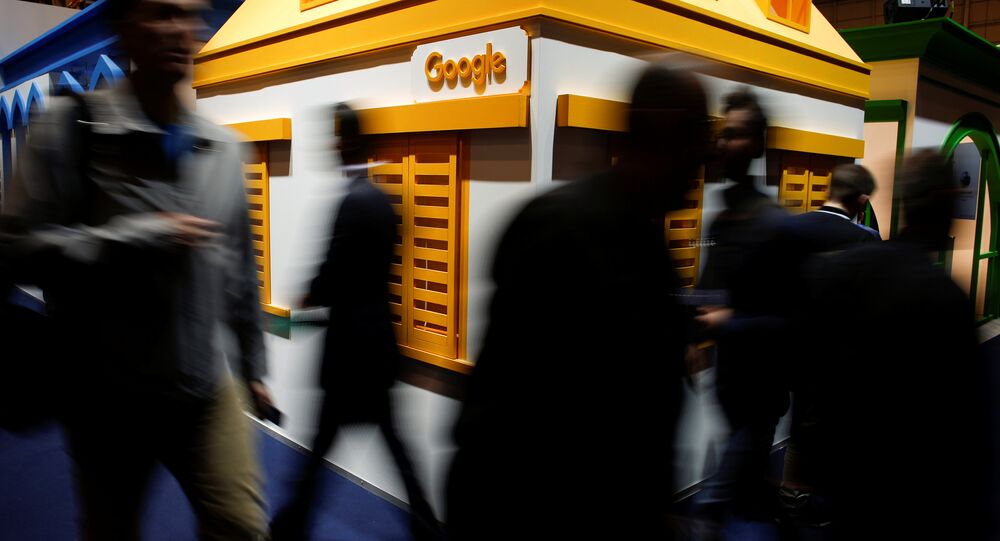 The head of Alphabet has said that Google News is seeking "derank" Sputnik and RT from its aggregator; Dr. Gordon Hahn, a Senior Researcher at the Center for Terrorism and Intelligence Studies told Radio Sputnik that the effort is "part of a global information war in an age of disinformation."

The executive chairman of Alphabet, Google's parent company, has said that the search engine is working on "deranking" Sputnik and RT from its Google News aggregator.

"We're working on detecting this kind of scenario you're describing and deranking those kinds of sites," Eric Schmidt said in an interview at the Halifax International Security Forum, Motherboard reported.

"It's basically RT and Sputnik," he added. "We're well aware and we’re trying to engineer the systems to prevent it."

Last month, Twitter banned RT and Sputnik from buying ads on its social network. In addition, the US Department of Justice has forced RT operations in the US to register as a "foreign agent" of the Russian government.

© AFP 2021 / TOSHIFUMI KITAMURA
Google's Sputnik & RT Clampdown 'Reminiscent of 17th Century Witch Hunts, Except Nobody's Getting Burned or Hanged Yet'
Dr. Gordon Hahn, a Senior Researcher at the Center for Terrorism and Intelligence Studies, political analyst and author of the forthcoming book Ukraine Over the Edge: Russia, the West and the "New Cold War," told Radio Sputnik that US activities to hamper Russian media outlets are a sign of a "new Cold War."

"The new Cold War is in full swing, we're returning to the days where both sides are trying to reduce the influence of the other in society. There's a certain paranoia that's growing and this is largely part of a global information war in an age of disinformation. All sides are engaged in propaganda."

Sputnik: What do you think could be the underlying motive behind Google's initiative?

Dr. Gordon Hahn: Google has a series of motives. Number one, they honestly believe that there's a problem with the so-called Russian threat inside the US. They're involved in the domestic political situation inside the US; Google is generally on the left-liberal side of the political agenda in the US [and] part of the campaign that's going on inside the Democratic Party in order to cover up the corruption and failure of the Clinton campaign.

They accused the Trump administration of having all these deep ties to Russia, which is being overplayed. Google is simply joining in, playing in that game.

Sputnik: Does this not create some sort of a dangerous precedent, perhaps, for freedom of speech in the US? Is Google's move limiting freedom of the press?

Dr. Gordon Hahn: I think it's limiting the freedom of the press; it's happening everywhere. It's not just something that's happening in the US, it's something relatively new in the US that seems to be accelerating. The press has been very biased but actually moving to censoring the other side is a problem.

© AP Photo / Marcio Jose Sanchez
Russian Media Watchdog on Google Plans to De-Rank Sputnik, RT: We Will Protect Russia's Interests
Of course, we did have many cases in the Obama administration of either threatening or opening investigations against journalists. Although I would say Trump has made some somewhat uncautious or unbalanced statements when it comes to the media, there have been no signs of bugging of journalists as there was under the Obama administration and so forth.

Now in the US, we're becoming less and less wedded to the foundations that made the country a leading democracy and both sides are now willing to violate principles and violate the constitution and as a result our democracy is degrading.

Sputnik: Do you believe that Google would target not only RT and Sputnik, but other media outlets as well in the future?

Dr. Gordon Hahn: That's probably down the road, sure. Why not some other Russian organizations or Chinese organizations? When things get really bad, why not begin to downgrade moderate Republican or even ultra-radical American nationalists or conservative sites. Why not? It's the old slippery slope.

In my view, let all voices speak and leave it to the public to sort it out. The general public doesn't really have the time to sort it out, that's why you need an objective, honest journalists' corps, which we don't have anymore.

We have a journalist corps that is divided up and playing "A team, B team." The A team is largely the Democratic Party, but you have talk radio which is more Republican, you have Fox on the TV and a couple of newspapers.

So, the entire media field is divided between the two teams. It's very difficult for anyone to get at the truth. In many cases, both sides have a bit of the truth and that's true when you're talking about relations between Russia and the US as well. We don't have an honest media that's willing to try to sift through all the stuff and give a balanced picture. We're just going to be polarizing within and between societies, and that's a recipe for nothing but civil war or world war.