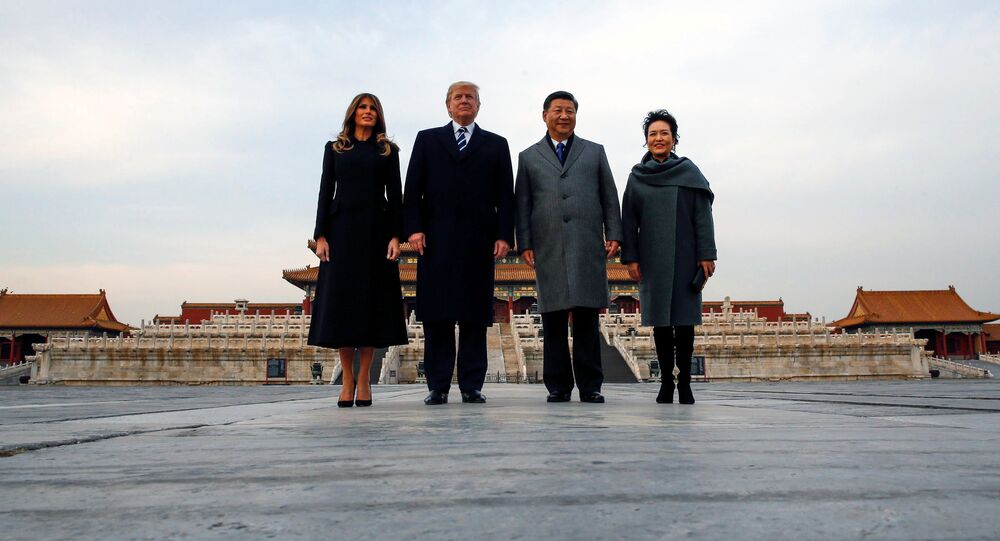 After delivering a stern warning to North Korea from the South Korean capital of Seoul on November 7, US President Donald Trump arrived in China on Wednesday, November 8, in a bid to convince Beijing to play a stronger role in reining in Pyongyang.

Sputnik spoke to Tong Zhao, a fellow of nuclear policy at the Carnegie Endowment for International Peace think tank, to ask if the West expects too much from China with regards to influencing the behavior of Kim Jong-un's government.

Sputnik: China has argued in the past that the leverage and influence the West says it has over North Korea is often exaggerated, do you agree?

Tong Zhao: I don't think Western countries deliberately exaggerate Chinese leverage, but I think they certainly overestimate Chinese leverage. Basically, China, as it economic sanctions on North Korea, is taking on higher and higher economic and security prices. China's local economies have been undermined as a result, and most importantly, North Korea has started to openly threaten China.

There were reports that North Korean senior officials said that their intermediate-range ballistic missiles can reach every corner of China. So the more China does to threaten the North Korean regime, the North Korea-China bilateral relationship could become a hostile one, and North Korean missile capabilities could become a direct security threat to China. So, those are the constraints on Chinese leverage over North Korea, which I don't think most Western countries sufficiently appreciate.

Sputnik: China claims that it is abiding by UN resolutions recently passed against North Korea, while Washington has of course expressed skepticism toward that. Is China abiding by these resolutions and is it doing all that it can do to pressure North Korea into denuclearization?

Tong Zhao: China was a party during the process of drafting those Security Council resolutions, so China signed up to every one of them, and therefore, China shouldn't have any problem with implementing those resolutions. The issue is fundamentally China disagrees with the approach of dealing with North Korea, compared to Western countries.

Given this fundamental disagreement, in Chinese implementation of the UN resolutions China will only seek to do as much as is required by the resolution. In other words, China doesn't really go beyond what is minimally required, so the standards of implementation are different in China and in the United States, for example.

Sputnik: President Trump has suggested that while in China, he will try to convince Chinese President Xi Jinping to pressure North Korea into abandoning its nuclear weapons program. Do you see Trump's trip actually altering the calculations of China towards North Korea in any way?

Tong Zhao: There was widespread speculation that after China concluded the recent party congress, that Xi Jinping will now be in a better position to take tougher measures and more radical measures toward North Korea and the visit by Mr. Trump will certainly help put more pressure on China to do more against North Korea. But I think that generally speaking that the Chinese calculations of its geostrategic benefits on the Korean peninsula won't really change.

© REUTERS / Aly Song
China's President Xi Jinping speaks during the opening session of the 19th National Congress of the Communist Party of China at the Great Hall of the People in Beijing, China October 18, 2017,

With that said, there are certainly areas for cooperation. For example, the two countries can discuss what joint measures they can take in case North Korea conducts another major provocation.

Breaking the Great Firewall: Trump Will Tweet in China 'Whatever He Wants'