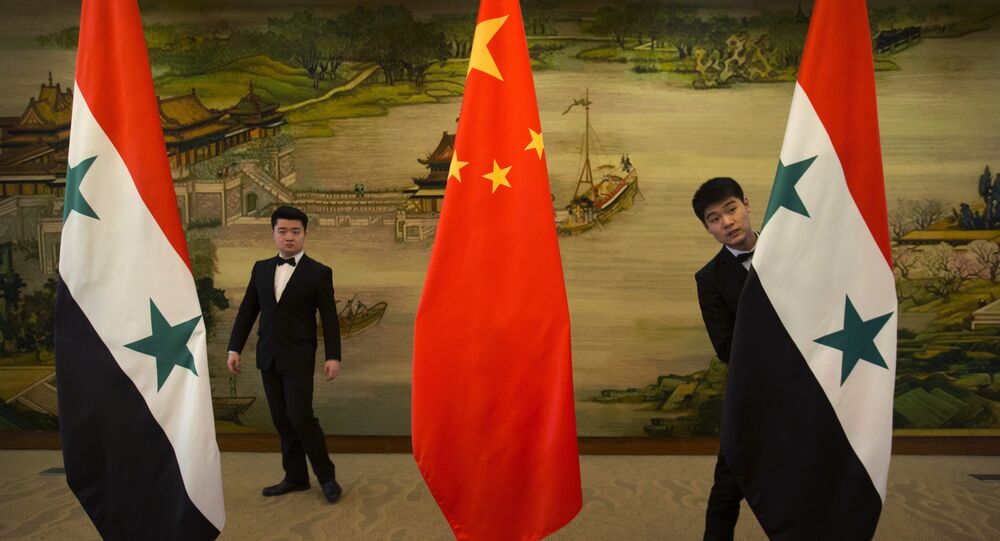 China has announced that it will continue to provide humanitarian aid to Syria. The announcement came as the 7th round of peace talks opened in Astana. French geopolitical analyst Pierre Picquart pointed out to Sputnik that this timing suggests that Beijing is asserting itself as one of key players in the Middle East, and explained why.

In his interview with Sputnik France, Pierre Picquart, Doctor in Geopolitics and an expert in China defined three major scopes of interests of Chinese diplomacy, namely the fight against terrorism, territorial stability and socio-economic progress, however underlined the specifics of China's line, which differ from those of the US, Russia and Europe.

Beijing, he said, is taking steps in many directions but is acting cautiously as it might not be fully familiar with the situation in the Middle East. Nevertheless, it has a presence at all the international negotiation platforms.

Last Monday, Chinese Ambassador to Syria Qi Qianjin stated that Beijing will continue its relief aid to Syria. While visiting the town of Manin in north of Damascus, the diplomat said that the aid will include water treatment, collective kitchen, bakeries, and a relief distribution point.

READ MORE: China is 'Not a Threat' to US National Security, but to Its Global 'Dominance'

The announcement came on the same day as the seventh round of peace talks that opened in the Kazakh capital Astana, where the participants are set to discuss expanding the number of observer states to include such states as Iraq and China.

"This is something new to China, however there is certain logic in it. As it is strengthening in its role of a future world leader, it is keen to play a more leading role in negotiations of any kind," Pierre Picquart commented to Sputnik.

He further elaborated that while the US and Russia have long been in the center of this conflict, with France also trying to find its place in this "big game," China has also been long pursuing its own interests in the Middle East.

China faces the threat of terrorism on its western borders, the analyst explained. Hence the fight against international terrorism is of primary importance to its foreign policy and diplomacy.

READ MORE: China, Move Over! India Considers Its Own 'Silk Road', Invites Iran to Join In

"Beijing wants to play a more significant role in the Middle East, specifically because its 'Silk Road' project One Belt, One Road will be laid through the countries of the region, and it will have a direct hand in the construction of these new trade routes," Pierre Picquart said.

According to the geopolitical analyst, China is now pursuing a more pragmatic approach in its diplomacy. Before, it tried to take a more cautious stance on international issues. However now it has no intention of letting others dictate which policies it should stick to on large-scale international issues, with regards to ongoing conflicts and other world powers.

Dr. Picquart however noted that Beijing adheres to the principle of multilateralism in diplomacy thus it does not interfere in any talks on a political regime change in any country or on the ousting of any particular leader. It will support a stable power and certainly won't allow the Americans or Europeans to make unilateral decisions at the negotiation table, he concluded.