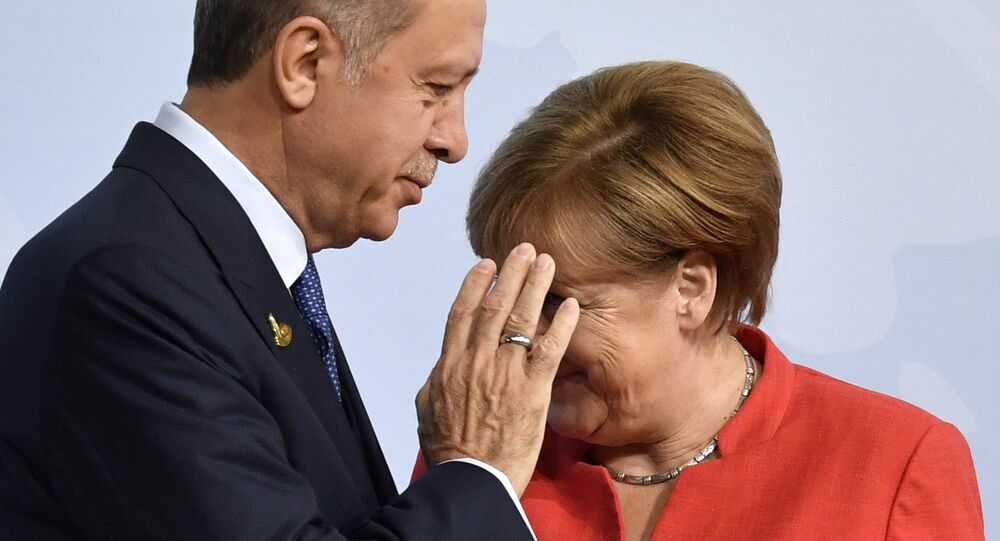 Sputnik has discussed the prospects of Ankara-Brussels relations with an associate senior research fellow at the Centre for European Policy Studies in Brussels, Erwan Fouere, and a deputy director at the French Institute for International and Strategic Affairs specializing in Turkey's policies, Didier Billion.

PARIS (Sputnik) – Talks on Turkey’s accession the European Union are currently in a deadlock as neither Ankara nor Brussels consider bilateral cooperation a priority anymore, opting instead for partnership with other countries, experts told Sputnik.

European Council President Donald Tusk confirmed that the EU leaders had agreed to consider decreasing and redirecting the funds allocated to Turkey under the Instrument for Pre-accession Assistance (IPA). This call was initially voiced by German Chancellor Angela Merkel, who had condemned the "negative developments" in the country. During her election campaign in September, Merkel also said that she would seek an end to Turkey’s membership talks with the European Union.

The accession talks between the parties were officially launched in 2005. Fifteen out of 35 chapters have been opened and one has been provisionally closed so far, with Ankara required to complete 33 chapters to enter the bloc.

The relations between the parties have significantly worsened after the 2016 failed coup in Turkey and the events that had followed it, including mass arrests of teachers and journalists in the country, seen as anti-democratic by the European Union.

Erwan Fouere, an associate senior research fellow at the Centre for European Policy Studies (CEPS) in Brussels, told Sputnik that despite being committed to its enlargement program, the European Union would mostly focus on the integration with the Balkan countries, rather than speeding up the negotiations with Ankara.

"After some years when the enlargement [program] was on the bottom of the list, if it was on the list at all, now it is back on the list, particularly in regard to the Balkan countries… There is now a renewed sense of importance given to the [EU] enlargement process… I would say that the main focus of it is on the Balkans, and I think there will be attempts to depopularize, to disconnect Turkey’s accession problems with the accession process for the Western Balkans," Fouere said.

"We see that Turkey tries to establish economic and political cooperation with another countries, in the Middle East, with Russia clearly, with China… With the European Union there is no rupture, but no real cooperation as well, despite the official discourse. I cannot say that now Turkey is more interested in this cooperation than the European Union. There is a reciprocal deadlock," the expert told Sputnik.

In Fouere's vision, the European Union initially had a commitment to bring Turkey closer, and it has made efforts to achieve this goal.

"Of course the recent developments have reduced the interest and desire, especially of a number of member states, and it is increasing following the behavior of [Turkish] President Erdogan, who has quite clearly ignored European treaties and requests … Turkey has the largest number of journalists in jail, that cannot be accepted and I think it is time for the European Union to make it clear to the Turkish government," Fouere pointed out.

© AFP 2021 / Adem Altan
‘Blackmail’ and ‘Betrayal’! Turkish Minister Slams EU for Imperiling Membership
Under Erdogan, Turkey has ignored repeated EU requests with regard to the rule of law, freedom of the media and many other aspects important for the accession process, Fourrier explained. The expert also suggested that if Erdogan continues his policies, the suspension of the accession talks would be inevitable.

Fouere also said he did not rule out that the vast majority of the EU member states would agree on Merkel’s proposal to withhold pre-accession assistance for Turkey.

Speaking about the process of the EU-Turkey talks as a whole, Billion said that the parties were in a very complicated situation where negotiations continued officially, "but in reality they do not have any substance, it is a sort of general hypocrisy." The situation is also worsened by the EU unwillingness to modernize the 1995 bilateral Customs Union deal, despite Ankara’s calls for an update, expert noted.

The current state of affair requires both Brussels and Ankara to make a step forward to try to relaunch the talks, Billion suggested.

EU Member States Divided on Future of Ties With Turkey

Billion said that there was no single position among the EU member states on the accession talks with Turkey.

"The [EU-Turkish relations] are on a very weak level, very tense with certain states, but I do not believe that 28 European states can agree to simply freeze the relations," the expert pointed out.

The CEPS researcher noted that the European Union would also not be unanimous on the issue of a pre-accession funds freeze.

"There is another aspect of it, an important amount of money transferred to Turkey every year, so-called pre-accession fund, which Merkel suggested to freeze. I do not think that can happen because it requires the agreement of all the 28 states … Merkel tries by all means to reduce the relations with Turkey, to stop its accession process, but for this kind of decision she needs unanimity and she will not have it," Billion pointed out.

Billion said he believes that France tries to stick to its diplomatic role of a mediator by supporting the continuation of the EU-Turkish talks.

"France considers that it is very complicated with Turkey, that political strategy of president Erdogan, thousands of arrests after the coup d’etat in July 2016 etc. represents a problem in Turkey from a democratic point of view. But despite that France confirms its desire to pursue the negotiations … [French President Emmanuel] Macron has stated that we need to maintain links with Turkey, he said that Turkey had the first degree strategically important role, demanding cooperation on Iraq, Syria … France is rather in negotiations with Turkey, trying to protect its own interests. France is trying to calm the tensions between Turkey and certain European states, so it has a very special and positive role," Billion explained.

In Billion’s point of view, the cultural difference between the European Union and Turkey, namely the former’s unwillingness to take in a Muslim country, is currently one of the main reasons for the deadlock in Ankara’s accession process.

"I believe the cultural issue is essential here. In the climate of Islamophobia, the rise of populism and the extreme-right parties, the EU leaders would have difficulty saying there is no problem in integrating a country with 80 million people of mostly Muslim culture. This requires political courage, and I think that Western leaders lack it," the expert said.

Billion noted the escalating tensions between Turkey and some of the EU member states, namely Germany, the Netherlands and Austria, who were wary of Turkey. Germany, in particular, has domestic policy issues linked to its large ethnic Turkish population.

© AP Photo / Axel Schmidt
A Nail in the Coffin: Merkel Considering Killing Turkey's EU Bid for Good
"[In Germany] there is a general feeling of mistrust to Turkey as a Muslim country. Another reason that applies purely to Germany is that a big proportion of people of Turkish origin living there, some 3 million people, makes the relationship with Turkey a challenge of domestic policy. It makes things complicated," Billion pointed out.

The expert suggested that the corridor of action on the issue of Turkey's accession was very narrow given that after September’s Bundestag election Merkel was negotiating to form her government with the Christian Social Union (CSU) party. The latter has an anti-Turkey stance and has called to end the accession talks.