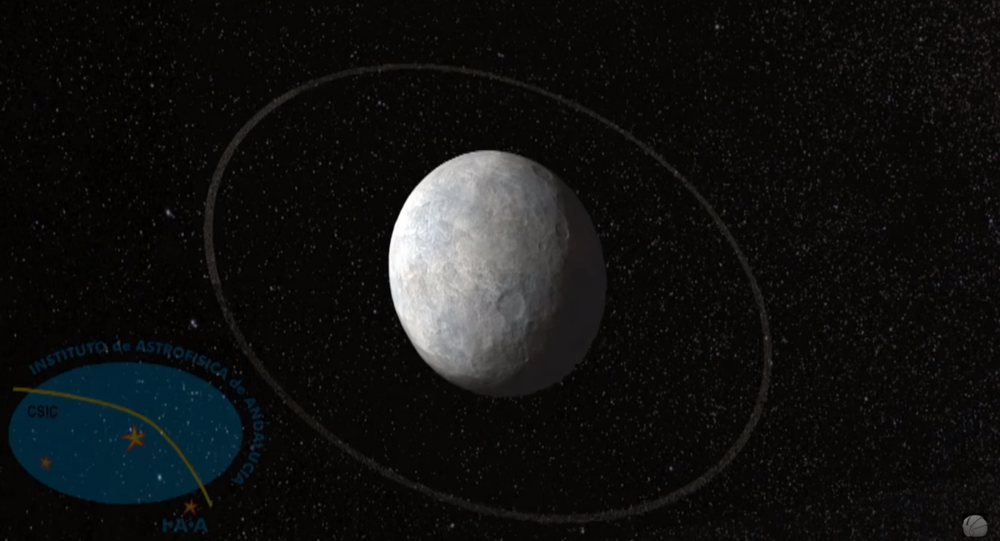 Rare Sighting: 'Collision Between Two Moons' May Have Formed Ring Around Haumea

Scientists are reporting the discovery of a vast ring encircling Haumea, a distant dwarf planet that takes some 284 Earth years to orbit the Sun. Radio Sputnik discussed the discovery with Dr. Rene Duffard who explained why this discovery is important.

Dr. Rene Duffard, co-author of the paper from the Instituto de Astrofísica de Andalucía in Spain, said that scientists have also previously discovered two rings around an object called Chariklo, one of a population of small minor planets called Centaurs that orbit the Sun between Jupiter and Neptune.

However, Haumea's ring is the first time astronomers have witnessed the phenomenon in a minor planet that isn't a Centaur.

“It is possible that the formation of this ring is due to a past collision of two small moons millions of years ago forming a ring around the planet. So we have discovered rings around small planets and giant planets such as Jupiter and Saturn,” Dr. Rene Duffard, said.

According to the scientist similar rings have been previously observed  around the planets in our solar system that have water on them, such as Pluto.

“The most important thing is that they have water, like 25% of the mass is water and we know that in the beginning of the solar system these kinds of objects, large with a lot of water, came into the inner part of the solar system where the Earth, Venus and Mars were forming. So maybe all the water that we have today is coming from outside from the outer objects like this one,” Duffard said.

© AP Photo / Petros Giannakouris
Three Planets Blocked Out by Moon: Rare Celestial Event Happening Right Now
According to the team of scientists, Haumea's ring has a width of 43.5 miles and a radius of about 1,421 miles, and the dwarf planet rotates three times on its axis in the time that a ring particle completes one revolution.

Discussing future research, Duffard said that the scientists will continue to look for more rings and study its material.

The discovery also provides the team with best analysis yet of Haumea's size and shape, which the researchers describe as “very exotic,” online publication Science Alert reported.

May the Force Be With You: Two-Star ‘Tatooine’ Planets Likely to Support Life