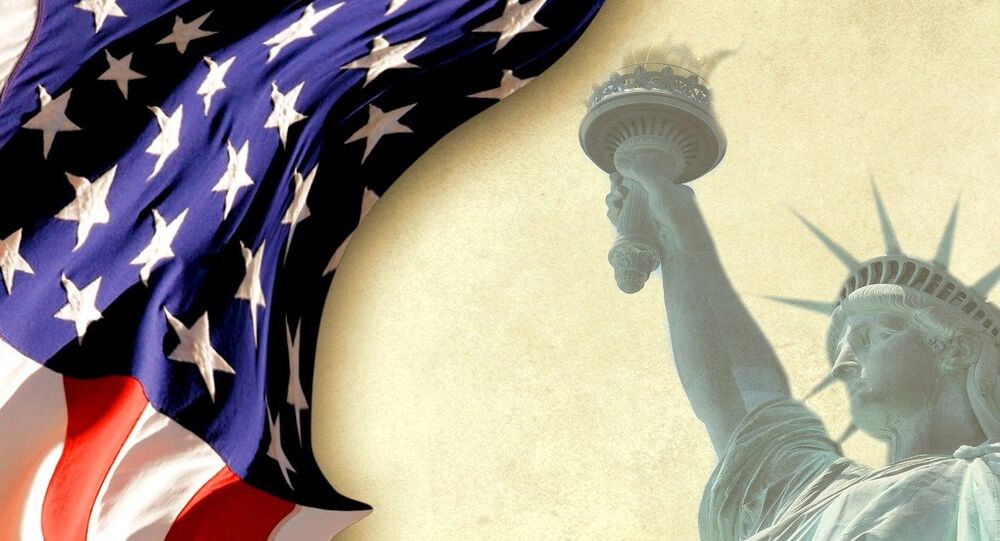 The decision taken by the US Congress to "punish Russia" for alleged meddling in the US elections with the maintenance of existing sanctions has been followed by a bill to weaken the ability of President Trump to "weaken sanctions on Russia," thus presenting a direct challenge to the President's authority. The bill was passed in the House of Representatives by an overwhelming majority and at time of writing awaits a hearing in the Senate, which along with the House makes up the US Congress. The legislation also includes new sanctions against not only Russia but also Iran and North Korea, thus maintaining the pattern of waging economic war against states which refuse to accept that Washington's writ should run wherever it decides whenever it decides.

Economic sanctions are not the benign instrument that some might assume. On the contrary, they are tantamount to an act of war, a means by which economic might is wielded as club to bludgeon 'recalcitrant' nations and states into submission. And though sanctions may not evoke the same sense of potency of cruise missiles, they kill just the same. The experience of the Iraqi people leaves no doubt of it.

Between 1990 and 2003 sanctions on Iraq, imposed by the UN, are estimated to have been directly responsible for the deaths of 2 million people, half a million of them children according to Unicef. Multilateral sanctions were imposed on the country in response to Iraq's invasion of Kuwait in August 1990. Under UN Security Council Resolution 661 it was mandated that UN-member states should prevent all imports originating in Iraq and Iraqi-occupied Kuwait, business activity between nationals of member states and Iraq, and should undertake an embargo of funds or "economic resources" to Iraq or Iraqi-occupied Kuwait, except for medical or humanitarian purposes.

As journalist John Pilger wrote in a March 2000 article:

"Under economic sanctions imposed by the United Nations Security Council almost 10 years ago, Iraq is denied equipment and expertise to clean up its contaminated battlefields, as Kuwait was cleaned up. At the same time, the Sanctions Committee in New York, dominated by the Americans and British, has blocked or delayed a range of vital equipment, chemotherapy drugs and even painkillers. 'For us doctors,' said Dr Al-Ali, 'it is like torture. We see children die from the kind of cancers from which, given the right treatment, there is a good recovery rate.' Three children died while I was there."

The sanctions imposed on Iraq were so draconian and sustained that two UN Humanitarian Coordinators in Iraq, Denis Halliday and Hans von Sponeck, resigned in protest. Yet even with the evidence of the role of the sanctions in killing half a million Iraqi children, Washington remained unrepentant. The by now infamous words of former UN Secretary of State Madeleine Albright in 1996, when in response to a question during an interview about the infanticide that was taking place as a result of the sanctions she said "the price is worth it," exposed the barbarity that lies behind the mask of Western civilization.

The fact the sanctions were only lifted from Iraq after the devastating war unleashed on the country by the US and its UK ally in 2003 had killed countless more children tells its own story.

Cuba has suffered under the iron heel of US economic sanctions and embargo longer than any other country on the planet. A raft of economic sanctions were originally imposed on the island in 1960 by the Eisenhower administration after the Cuban revolution of the previous year succeeded in toppling the US-supported dictatorship of Fulgencio Batista, after which US corporations and businesses that had been operating without restraint in Cuba were expropriated and nationalized.

© AP Photo / Franklin Reyes, File
Miniature flags representing Cuba and the United States are displayed on the dash of an American classic car in Havana, Cuba.

Relations between Havana and Washington turned even more sour two years later when Fidel Castro defied Washington in forging close ties with the Soviet Union. In response, the Kennedy administration imposed complete economic sanctions, which have remained more or less in place over succeeding decades.

As French journalist Salim Lamrani pointed out in a 2016 interview on the history of US sanctions against Cuba:

"The sanctions are anachronistic because they date back to the Cold War. They are cruel because they affect the most vulnerable categories of the Cuban people, not the leaders. Finally, they are ineffective to the extent that the initial goal of overthrowing the Cuban Revolution has clearly failed."

Most cogently, Lamrani makes the point that "Rather than isolating Cuba internationally, these sanctions have instead isolated the United States."

The sanctions imposed by the US and its European allies/vassals on Russia, meanwhile, have been justified as a response to 'Russian aggression' in eastern Ukraine, along with reunification of of Crimea with Russia in 2014. As I have written previously, this is a false and tendentious rendering of what has occurred in Ukraine and why.

© AP Photo / Jae C. Hong
Trump, Obamacare, and Why Healthcare Should Be a Right Rather Than a Privilege
But regardless of the whys and wherefores, the idea that the largest country in Europe with the second most powerful military in the world, whose economy is stable and built on solid foundations, could ever be brought to its knees by economic sanctions is so preposterous it is laughable.

However the mendacity and arrogance behind Washington's history of imposing economic sanctions against other states is certainly no laughing matter, not when we consider the ineffable human suffering they have caused and continue to cause.

Moreover, a history of subverting, destabilizing, and destroying one country after another is all the evidence needed to label the US a country so drunk with power and a corresponding sense of exceptionalism that the rest of the world would be more than justified in uniting to impose sanctions on it. In fact, given the brutal history of US imperialism the world needs to as a matter of necessity.

As Fidel Castro said, "The United States tyrannizes and pillages the globalized world with its political, economic, technological, and military might."

Trump, Obamacare, and Why Healthcare Should Be a Right Rather Than a Privilege