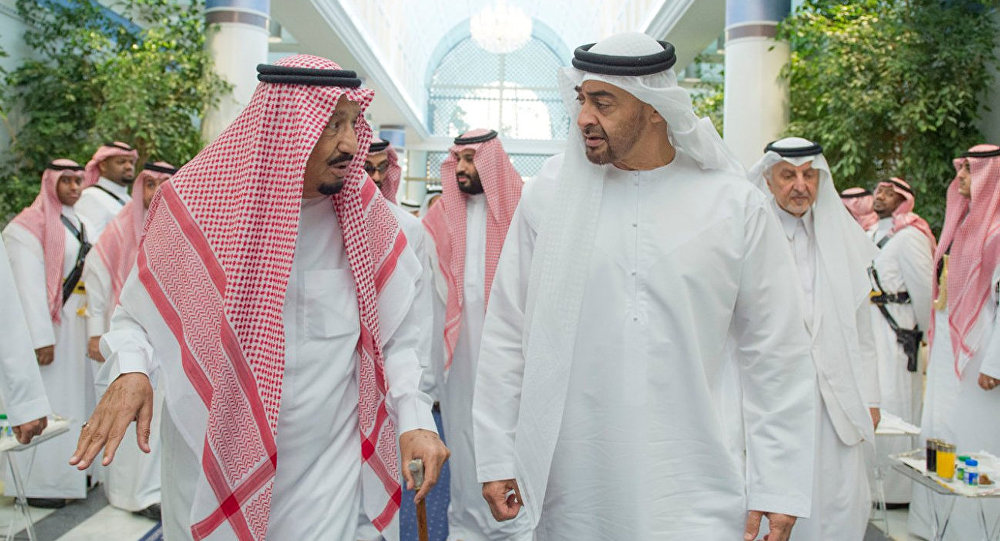 With Trump on Board, the Saudis Move Against Iran

Saudi Arabia accusing Qatar of sponsoring terrorism is like the McDonald's fast food chain accusing its Burger King rival of sponsoring obesity. However the schism that has opened up between the Gulf States carries with it a dangerous portent of a regional conflict with ramifications for the entire world.

Adding to this sudden ramping up of regional tensions is the terrorist attack unleashed by Daesh in Iran, involving an armed and suicide bomb assault on the country's parliament and shrine to the Islamic Republic founder, Ayatollah Khomeini, in Tehran. 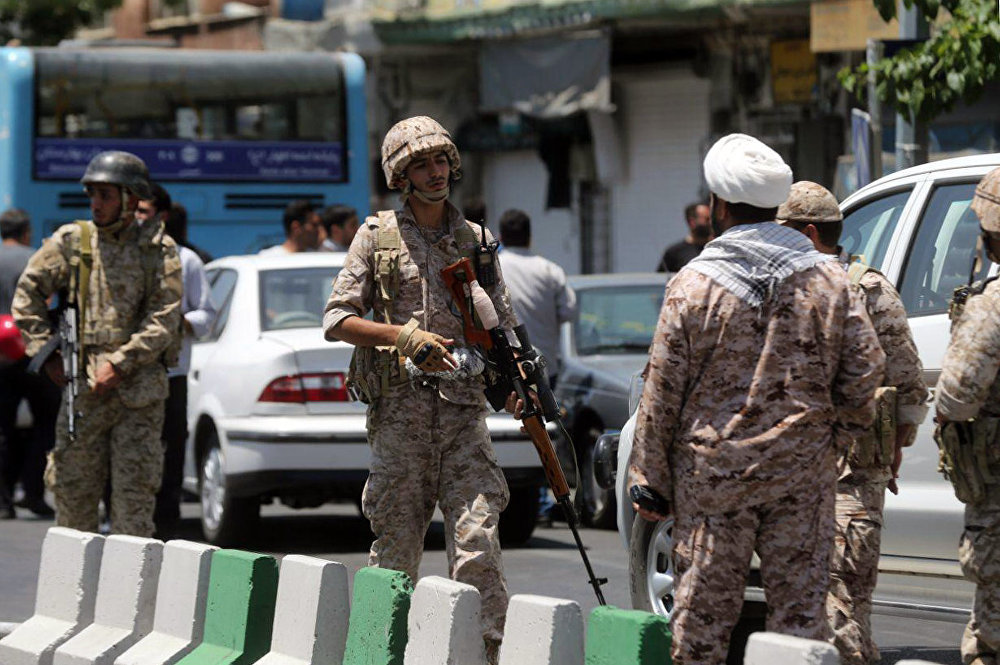 © AFP 2019 / Hossein MERSADI / FARS NEWS
Members of the Iranian Revolutionary Guard secure the area outside the Iranian parliament during an attack on the complex in the capital Tehran on June 7, 2017

In response to the attack we were provided with a stark reminder of the difference in geopolitical priorities that continue to bedevil relations between Moscow and Washington. It came in the form of their respective messages of condolences. Whereas in his personal message to the Iranians Vladimir Putin "strongly condemned" the attack while confirming "Russia's readiness for further joint efforts with Iran" in the fight against terrorism, in the message from the US the Iranians were left in no doubt that the White House believes they had it coming. To wit: "states that sponsor terrorism risk falling victim to the evil they promote." 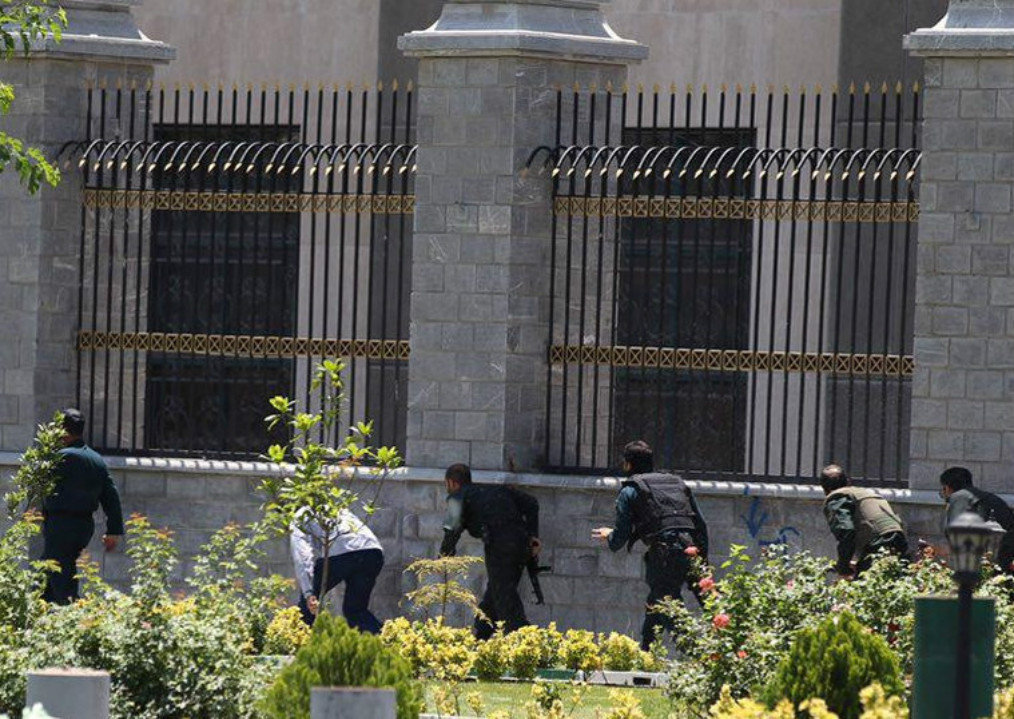 © REUTERS / Omid Vahabzadeh/TIMA
Members of Iranian forces run during an attack on the Iranian parliament in central Tehran, Iran, June 7, 2017

Only a fool or a knave could accuse Iran of sponsoring terrorism. On the contrary, Iran is a strong ally in the struggle against terrorism and its depiction otherwise by a US administration mired in crisis and dysfunction is one that plumbs the depths of dishonesty and dishonor. Indeed it is becoming increasingly difficult to summon the words to accurately describe the callous and egregious role the US plays in a region over which it has long claimed ownership, even in defiance of international law or the sovereignty of its constituent states.

President Trump's recent state visit to Riyadh, during which he performed in toe-curling fashion the ritual sword dance the Saudis demand of visiting heads of state, confirmed that under his watch the demonization of Iran, Syria, and their allies — in other words the states and groups that dare to resist Washington's hegemonic agenda — will not only continue but intensify.

© REUTERS / Jonathan Ernst
US President Donald Trump bids farewell before he and first lady Melania Trump board Air Force One to depart for Israel from King Khalid International Airport in Riyadh, Saudi Arabia May 22, 2017.

In this regard, it is hard to avoid the conclusion that Riyadh's bellicose stance towards Qatar, its fellow Gulf Cooperation Council (GCC) member, is somehow connected to Trump's recent visit to the kingdom and is come stamped with his administration's approval.

The tiny oil and gas rich state of Qatar is in a vulnerable geographic position relative to its much larger Saudi neighbor to the south, the only country in the region with which it shares a land border. Yet despite its size and a population of just 2.2 million, 2 million of which are expatriates, Qatar enjoys considerable influence in the region and beyond, due to its inordinate wealth and much vaunted investment fund. Its state broadcaster, Al-Jazeera, is a global media giant, which enjoys significant influence when it comes to shaping the global news narrative. In recent years the news network has been a pillar of support for regime change in Damascus, eagerly providing a platform to opposition voices and groups throughout.

© AP Photo / Office of the Iranian Supreme Leader
Pointing the Finger at Saudi? Tehran Attack First Against Iran in 35 Years

The role of both the Saudis and Qataris in funding terror groups in the region, up to and including Daesh, is no secret, even though both countries have denied any links to the Salafi death cult. The Saudis, with their elevated status as the guardian of Islam's two most holy sites at Mecca and Medina, have come under pressure within Salafi circles during the course of the conflicts in Iraq and Syria, criticized over their close alliance with Western governments, such as Washington, and the perceived un-Islamic luxury and decadence of their palace court.

Indeed, at its peak, the so-called caliphate of the self-proclaimed Islamic State was viewed as a threat to Saudi legitimacy as guardians of the faith and Holy Places. It is why we have witnessed a quixotic shift and counter-shift by the Saudis when it comes to its role in the Syrian conflict, supporting one group only to later withdraw that support in favor of another, and so on. Then, too, its military campaign in Yemen, which has dragged on now for two years, hasn't met with the victory or success anticipated; with the Iranian-backed Houthi rebels proving a much tougher nut to crack than envisaged.

Despite the claims and counter-claims when it comes to who is supporting and sponsoring terrorism, the spat between Saudi Arabia and Qatar is over Iran, Riyadh's Shiite bete noir. The cold war that has long ensued between Iran and Saudi Arabia, supported by their respective allies, sits at the heart of the instability and conflicts that currently engulf the region. It is a struggle for legitimacy and influence within the Muslim world, with the Saudis clearly deciding that now is the time to assert their dominance among its fellow GCC states and bring to heel those Gulf States, such as Qatar, which dare elicit evidence of forging anything other than hostile relations with Tehran.

With the Iranians blaming the Saudis for the terrorist attack the country has just experienced, the Qataris, who have received the support of Erdogan in Turkey in its spat with the Saudis, have a crucial decision to make: do they accept Riyadh's ultimatum and abjure Iran, cutting all ties to the Islamic Republic, or do they move closer into an Iranian orbit? In approaching the Iranians and Turks for help in securing food and water supplies in recent days, doing so in response to the closure of the border and air space by the Saudis — in a move supported by the United Arab Emirates — it is the latter course the Qataris have decided to take.

Qatari support for the Muslim Brotherhood explains Ankara's position in this regional schism. Erdogan's ruling AK Party is a branch of the Muslim Brotherhood, as is Hamas in Gaza, which the Qataris have also been supporting in recent years, much to the chagrin and dismay of the Israelis as well as Riyadh. Explaining Saudi animus towards the Muslim Brotherhood we need look no further than the organization's belief in democracy and opposition to hereditary rule, both of which are anathema to a royal family that has given its very name to the country it has ruled without interruption since established in 1932.

Returning to Washington, and while Trump's stance in this Gulf State imbroglio has been made clear in one of his by now customary tweets, the Pentagon does not share his unequivocal stance. This is no surprise when we consider that the US Udeid Air Base in Qatar is a vital strategic and military asset, explaining the unprecedented statement by US military chiefs praising the Qataris after the president sent out his tweet doing the precise opposite.

While Obama was in office, the Saudis were kept on a long leash when it comes to their mortal hatred of Tehran, with Obama administration's participation in the P5+1 nuclear deal viewed by the Saudis as tantamount to a betrayal. At least Obama understood that despite the mammoth trade arms trade enjoyed by US defense companies and manufacturers with the Saudis, and despite the importance of the kingdom's role within OPEC when it comes to maintaining stability vis-a-vis global oil supplies and prices, Saudi Arabia is an impediment to peace and stability in a region currently beset by conflict and uncertainty.

But now with Trump at the helm, as already shown, anything can happen.