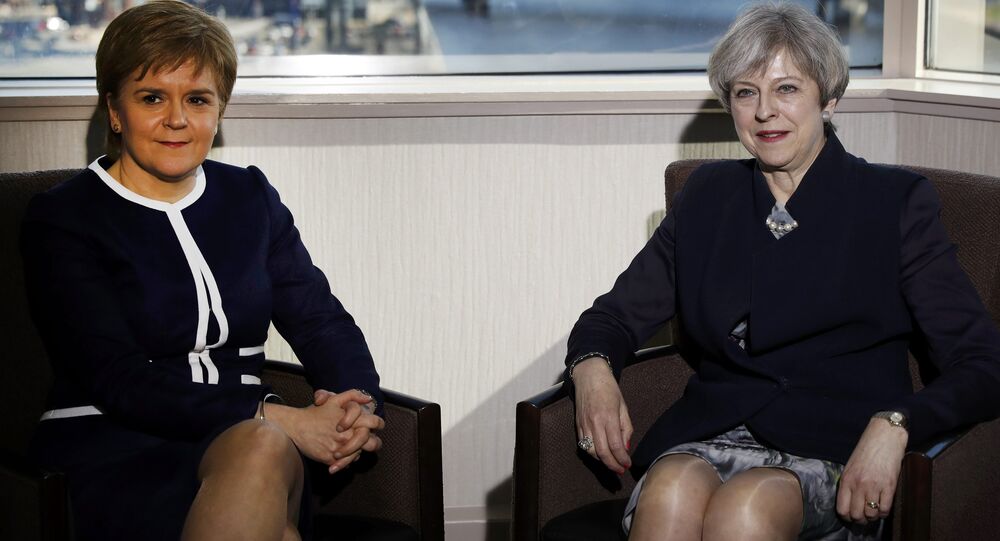 British Prime Minister Theresa May's decision to call a snap general election bears all the hallmarks of a government in the throes of a continuing political crisis in the wake of last year's referendum result to rip the UK out of the EU, commonly referred to as Brexit.

The Prime Minister's reasoning for the early general election, which is set to be held on the 8th of June, is to give her the mandate required to take Britain into the protracted period of negotiations with Brussels on the terms of the UK's exit from the European Union.

Theresa May, it should be pointed out, succeeded her predecessor, David Cameron, as Prime Minister after he resigned in the wake of the EU referendum result. She was elected by the ruling Conservative Party as leader, and as such Prime Minister, without receiving any democratic mandate from the British electorate.

This being said, it is impossible to negate the whiff of opportunism when it comes to May's decision to go for an early election. In so doing, she clearly believes it will serve to derail any last vestige of post-referendum opposition to Brexit, thus paving the way for the imposition of what is being referred to as a "hard Brexit" — i.e. exit without any trade deal or arrangement being negotiated with Brussels. The potential impact on the British economy in such a scenario is grim indeed, which is why Scotland's First Minister and leader of the Scottish National Party, Nicola Sturgeon, has been demanding a second referendum on Scottish independence recently. As such, the SNP's vote in the upcoming UK general election will be a barometer of support in Scotland for this stance, support that recent opinion polls suggest is currently lacking.

© AFP 2020 / RUSSELL CHEYNE / POOL
Scotland's First Minister Nicola Sturgeon speaks in the chamber on the second day of the 'Scotland's Choice' debate on a motion to seek the authority to hold an indpendence referendum, at the Scottish Parliament in Edinburgh

In truth, instead of clarifying Britain's constitutional position vis-à-vis Europe, Brexit only succeeded in kicking over a constitutional hornet's nest when it comes to Scotland's status within the UK. And what opponents of Scottish independence fail to grasp is the extent to which the first referendum on Scottish independence in 2014 awakened a national consciousness that is not going back to sleep anytime soon.

It means that politics in Scotland is now viewed through a national prism, much to the detriment of a Labour Party that for decades was the dominant political party in the country, but which in the wake of the first Scottish independence referendum has been reduced to one solitary Scottish MP in the UK's Westminster Parliament.

© AP Photo / Alastair Grant
Leader of the opposition Labour Party Jeremy Corbyn delivers a speech laying out the plan for the party following the Brexit vote in June 2016, in London, February 24, 2017.

This upcoming UK general election is in essence a second referendum on Brexit, which is where Theresa May is pursuing a clever strategy in calling it. With the Labour Party still mired in a fractious inner-party squabble over the status of its current leader, Jeremy Corbyn, and with the latest opinion polls revealing a lack of support for another referendum on Scottish independence, the Prime Minister believes there is no better time to isolate the opposition and forge ahead with the aforementioned so-called hard Brexit.

Nicola Sturgeon's unionist detractors repeated call for another referendum, the second in three or four years, is needlessly disruptive and divisive at a time when Britain needs to unite. They assert that rather than continue down this constitutional track, she should accept the result of the EU referendum and get on with the "day job" of leading Scotland's devolved government.

However this is both tendentious and disingenuous, considering that 62% of people in Scotland voted to remain in the EU at the 2016 UK-wide referendum on Britain's membership.

© REUTERS / Leon Neal
UK PM Theresa May Warned Over Brexit Campaign and Civil Service
In the wake of the decision to Brexit — which across the UK breaks down to 52% voting to leave and 48% to remain — Scotland's First Minister has gone out of her way to broker a compromise arrangement with Theresa May's government, one in which Scotland could retain membership of the European single market while at the same time remaining part of a UK that sits outside the EU.

In this regard Sturgeon is clear: single market access is vital to the health of the Scottish economy in terms of employment, investment and the role that EU migrants have played in filling a skills gap within the economy.

Unfortunately, the Scottish First Minister's attempts to arrive at any such compromise deal with Britain's Prime Minister have all been unceremoniously rebuffed, sacrificed to the interests of the anti-Europe wing of Theresa May's Tory Party and a feral EU-hating right-wing media in England. It is a rebuttal that has posed the question of whether Scotland is a partner nation or whether merely a region of the United Kingdom? No leader of the Scottish National Party, much less one who also happens to be the First Minister of the devolved Scottish Parliament, could possibly countenance acceptance of the latter status within that question.

Locating this issue in a broader context, we are living through an age of constitutional crises, what with centrifugal forces within the EU gaining increasing political momentum over the past few years. This growing momentum is, however, a symptom of a deeper malaise within neoliberalism, which at time of writing is over in all but name. A variant of capitalism premised on the primacy of economics over politics and national sovereignty, neoliberalism has crashed against the rocks of the tremendous inequality it has sown, dividing the world between a tiny super-rich elite and everybody else.

In the words of Ireland's WB Yeats:

Mere anarchy is loosed upon the world,

The blood-dimmed tide is loosed, and everywhere

The ceremony of innocence is drowned;

The best lack all conviction, while the worst

Are full of passionate intensity."

'They're Not Bluffing': Sturgeon Goes for Second Independence Referendum