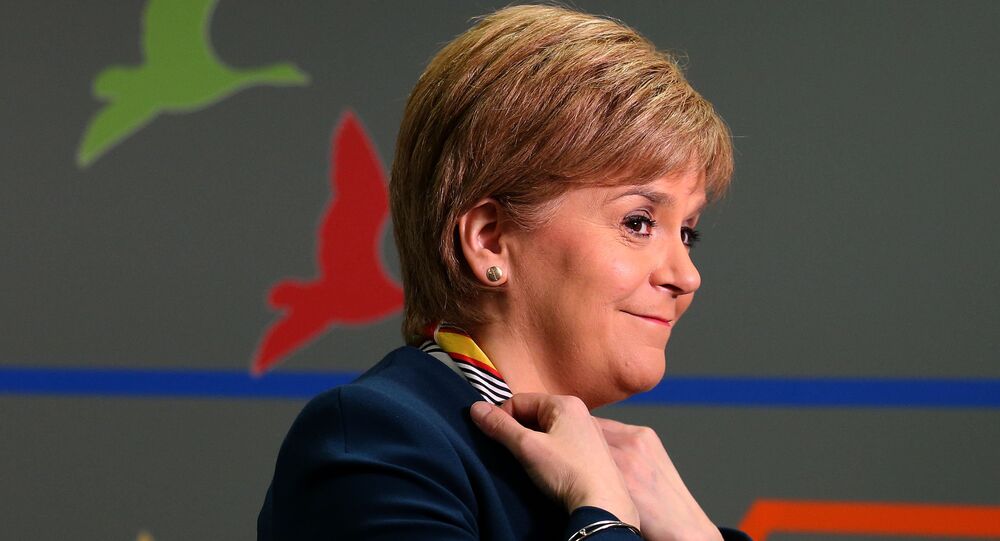 'They're Not Bluffing': Sturgeon Goes for Second Independence Referendum

Scottish First Minister Nicola Sturgeon has written a letter to Theresa May formally requesting a second Scottish independence referendum, raising a number of legal questions about whether and how it can and will be held.

On March 30, just hours after Prime Minister Theresa May officially commenced the UK's secession from the European Union with the triggering of Article 50, the Scottish Government's official Twitter account posted a picture of Sturgeon allegedly putting the finish touches to a Section 30 letter — the formal prerequisite for holding a second Scottish Independence Referendum.

The move followed a March 28 vote by the Scottish in favor of seeking permission for an independence referendum, to take place between autumn 2018 and spring 2019. The bid passed by 69 to 59.

POLL: Most Scots think Holyrood, not Westminster, should have the right to decide whether to hold #ScotRef https://t.co/xqtfWRBaT6 pic.twitter.com/DsfQYsEMqG

Sturgeon has claimed the mandate for another vote is "beyond question" and warned it would be "democratically indefensible" for Westminster to stand in Scotland's way — the SNP's manifesto for the 2016 Holyrood elections made clear another ballot would take place if there were a ''material change in circumstances'' from the previous plebiscite in 2014.

However, May's government has consistently and unequivocally stated it will block any move for a second independence referendum — Defense Minister Sir Michael Fallon told Sturgeon to "forget it"; Scottish Secretary David Mundell responded to the Holyrood motion by saying the Government would decline the request; May herself said "now is not the time."

Following the March 28 Holyrood vote, Sturgeon said she would set out the next steps for achieving a referendum if she is rebuffed following the Easter recess. Given the government has no obligation to acquiesce to the Section 30 letter, and oft-repeated Ministerial intransigence on the issue, refusal is almost certain. However, opinion varies on whether this means a second referendum cannot be held.

While the Scottish parliament's powers to pass laws are limited when it comes to constitutional issues regarding "the Union of the Kingdoms of Scotland and England," the Scottish government certainly believes it has the ability to hold a referendum without Westminster's proviso, and argued as much in 2012. Some legal experts agree.

Scotland could opt for an "advisory" or "consultative" referendum with or without Westminster's blessing, although the result would by definition not be legally binding. Any subsequent changes to Scotland's position within the UK would require negotiation between Holyrood and Westminster, and relevant legislation passed in both parliaments. Whether Westminster would accede to Scotland's demands if a second referendum — whether sanctioned or not — was successful is questionable, although MPs backed Brexit, despite most members reportedly disagreeing with the move, and having the ability to refuse it in legal theory.

Professor Stephen Tierney, Director of the Edinburgh Centre for Constitutional Law, has also highlighted another possibility — that the Scottish government could eventually withdraw its plan.

"The First Minister has indicated there could be room for compromise if [the UK Government] is willing and able to negotiate a special status for Scotland in Brexit negotiations. Even in the absence of this, there are other factors that could frustrate the Scottish government's plans — for example, moves towards a good deal for the UK in Brexit negotiations and opinion polls showing support for independence diminishing, added to a commitment to further constitutional reform in a federal direction, could possibly combine to halt the process," he said in a statement.

However, Professor Tierney states one thing is clear — the Scottish government "is not bluffing."

"If [Sturgeon] can convince Westminster to grant this, the path will be set for a referendum that could see Scotland leave the UK just as the UK leaves the EU. The onus is now firmly upon the UK government to take extremely seriously the distinctive priorities of the devolved territories — Northern Ireland and Wales, as much as Scotland — as it begins the Brexit process," he concluded.

While it's evidently uncertain whether a second referendum will be held, how, and what legal status it will have, an aggressive and potentially protracted legal debate on the subject seems all but assured.