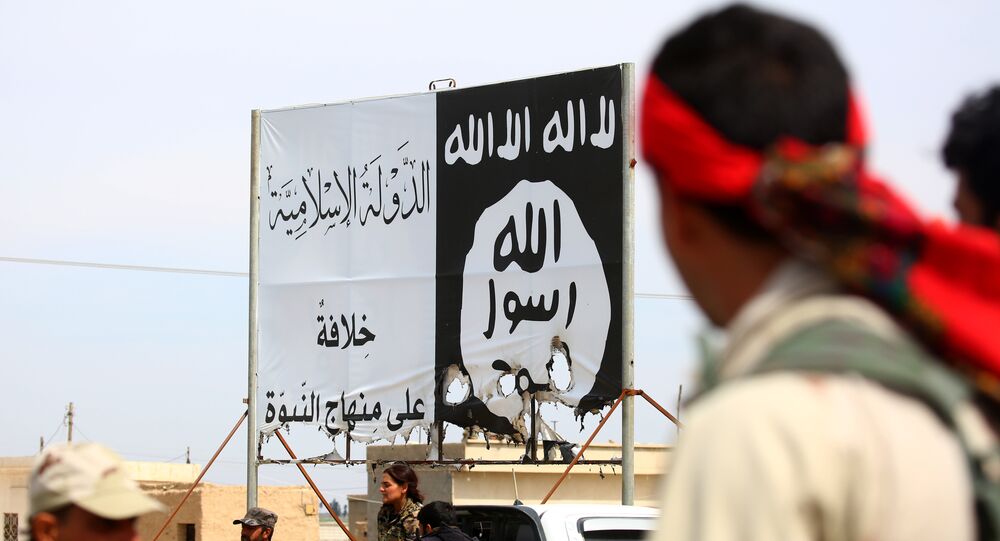 Syria's Kurds have been among the bravest and most effective fighters in the war against Daesh. Yet as things stand, they may also be on course to being the most treacherous.

© REUTERS / Omar Sanadiki
Reflections on Six Years of Conflict in Syria
Whether organized under the auspices of the YPG (People's Protection Units) or SDF (Syrian Democratic Forces), the role of the Kurds in northern Syria in first resisting, then taking the fight to Daesh, will go down in history.

However, as they continue their advance through Raqqa province, closing in on the city of Raqqa from the north, it is increasingly clear that with Washington's support they are intent on exploiting the conflict to carve out their own autonomous territory in Syria, as they tried to in March 2016 with a unilateral declaration of independence. The attempt back then was not only rejected by Damascus, but also more significantly by Washington.

Despite Washington's rejection in March 2016, a year has passed and with it a significant shift in the dynamics of the conflict and its geopolitical context.

The Iranian-Russian-Syrian axis has made significant progress in pushing opposition forces out of their formerly entrenched positions in western and central Syria, with the liberation of Aleppo back in December 2016 marking an irreversible shift in the momentum of the conflict in favour of pro-government forces.

Meanwhile, US, Iraqi, and Iraqi Kurdish forces involved in the battle to retake Mosul from Daesh in northern Iraq have found themselves bogged down in a house to house dogfight, with the Salafi-jihadi group putting up a determined and desperate defense.

The operation to take the city was originally envisaged to take just a few weeks when it began at the start of November last year. And from the outset it was planned as part of a two-pronged operation, designed to include the liberation of Raqqa, the self-declared capital of the so-called Islamic State — also known as Daesh — across the Syrian border.

© Photo : Pixabay
Ending the Conflict in Syria: What Would Abraham Lincoln Do?
As for Donald Trump, elected President of the United States, in November last year, his pledge to embrace a joint Russian-US approach to the Syrian conflict has yet to materialize.

On the contrary, the recent unilateral deployment of additional US troops to Syria was an ominous development, especially since the Trump administration has yet to categorically state that regime change is no longer a US strategic objective in Syria. Allied to the belligerent noises that have issued from the Trump White House with regard to Iran, we cannot but arrive at the conclusion that Trump's agenda in Syria may well be every bit as malign as that of his predecessor, Barack Obama.

So what advantage will the US and its Syrian Kurdish allies gain in taking Raqqa from Daesh?

For the Kurds it will be a major boost to their objective of establishing their own autonomous state/territory afterwards, making Washington far more susceptible to supporting it than previously. It is highly likely that dialogue between the Kurds and the Americans has already taken place with this in mind.

As for the US, its strategic objectives when it comes to Syria are no secret. The Assad government has long been an opponent of US domination of the region, which is intertwined with Syria's opposition to Israel and its expansionist aims. It forms an axis of resistance along with Iran and Lebanon's Hezbollah vis-a-vis the aforementioned Washington agenda.

Therefore, taking Raqqa in conjunction with the Kurds, and others fighting under the banner of the SDF, will allow an alternative pole of authority to be established in Syria with a view to any post-conflict settlement.

There is something undeniably murky when it comes to the way Washington has developed a close alliance with the Kurds over the past few months, even at the cost of incurring the extreme displeasure of their NATO ally Turkey.

Ankara's determination to lump the Kurds in the same box with Daesh adds another layer of intrigue to this unfolding drama.

The notion that Turkey will stand by while something approximating to a Kurdish state is established on its border at any time, never mind a time when it is engaged in a military campaign to crush the PKK, is delusional. The presence of Turkish troops in northern Syria over the past seven months, in a military operation which just ended, leaves no doubt of it.

Thanks to Sykes-Picot the Kurds constitute the largest stateless people in the world, spread between four nations in the Middle East — Iran, Iraq, Syria, and Turkey, along with a wider Kurdish diaspora spread mostly across Europe. There is no accurate figure when it comes to the size of the Kurdish population, but it is thought to number anywhere between 30- million. This being said, it would be a mistake to consider them a homogenous group.

There are 2.5 million Kurds in Syria, predominately located in the north close to the border with Turkey. In 2011, the Assad government granted up to 300,000 of them Syrian citizenship, a decision his opponents and detractors dismissed as instrumentalist. Regardless, Syria remains a sovereign state and its people will not accept any of its territory being cleaved off in the context of a conflict in which tens of thousands of Syrians have perished defending that sovereignty.

The Kurds, throughout their history, have revealed a proclivity for accepting the support of any imperial power in the furtherance of the aim of establishing a state of their own. This has been their mistake.

Whatever imperialism gives with one hand, it can and does obliterate with the other.