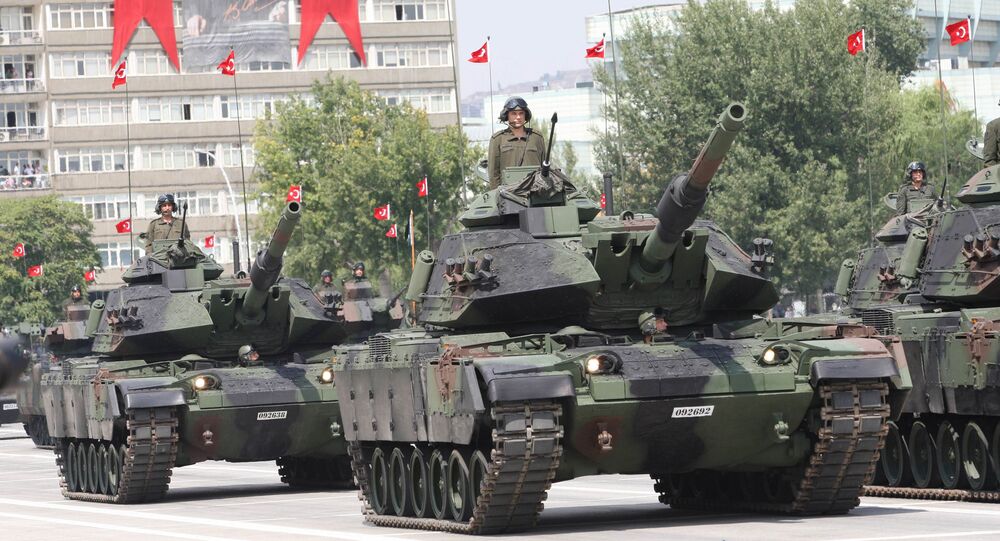 On Thursday, Turkish President Recip Tayyip Erdogan reiterated that the withdrawal of Turkish troops from Iraqi Kurdistan was "out of the question." What is it exactly that stands behind the Turkish intervention in yet another country, and what exactly can Russia do about it? Sputnik explores.

Last week, Turkey deployed about 150 troops, and over two dozen tanks, to northern Iraq, ostensibly to help liberate Mosul from Daesh (ISIL) terrorists. Baghdad, weakened by its war against the jihadists, issued a protest, saying that Turkish troops entered the country illegally and without its consent, and threatening to take the issue before the UN Security Council.

Erdogan retorted, suggesting that "we were asked by Prime Minister Haider al-Abadi to help train soldiers and, at his request, set up a training camp in Bashiqa [outside Mosul] in 2014. Why has he been silent until now?"

© AP Photo / Burhan Ozbilici
Turkey Intends to Spread Influence in Region by Invading Northern Iraq
Suggesting earlier that Turkish forces were only present in Iraq to train Peshmerga Kurdish fighters in their war against Daesh, Erdogan now also accuses Iraqi and Iranian Shiites of persecuting Sunnis in Iraq and Syria. "What will become of the Sunnis? These areas have Sunni Arabs, Sunni Turkmen, Sunni Kurds. They need to feel that they are safe."

But according to Russian online newspaper Svobodnaya Pressa, "behind all this rhetoric is Turkey's reluctance to lose its influence in the territories which once belonged to the Ottoman Empire." The newspaper suggests that it is Erdogan's "neo-Ottoman appetites which lurk behind the country's actions," from Syria to Iraq to the far-off Balkans.

Speaking to the newspaper, Anna Glazova, the head of the Center for Asia and the Middle East at the Russian Institute for Strategic Studies, explained that Ankara's "excessive geopolitical ambitions have forced the Turkish leadership to act in a cynical way. On the one hand, Ankara says that it respects Iraq's territorial integrity; then it turns around and says that it has no plans to withdraw its troops from the country."

"The real reason for the troops' introduction," Glazova suggests, "is that Ankara has realized, following Russia's intervention in Syria, that it will no longer be able to turn the country, or its significant part, into its unofficial protectorate."

© AFP 2021 / BULENT KILIC
Kurds Protest Erdogan's Invasion, Bombings of Iraq
Therefore, "in order to 'stake out' other territories, Turkey has decided to send its troops into Iraqi Kurdistan. Given the apparent consent Kurdistan's leadership [but not that of much of the area's population], we can say that Turkey has managed, for now, to secure for itself this piece of Iraq."

According to Glazova, apart from imperial ambitions, there is another reason for the Turkish invasion: energy.

"Ankara is now frantically looking for ways to reduce its dependence on energy supplies from Russia," the analyst explained. "Notably, there is a project for the supply of gas from Iraqi Kurdistan. Following the introduction of Turkish troops, and the construction of a gas pipeline to Turkey, it is entirely possible that supplies from Iraq will flow to Turkey, all without the consent of the Iraqi government, which will be unable to do anything in this situation."

"Moreover," Glazova notes, "Turkey could return to the old project of building a gas pipeline from Qatar; except if before, this pipeline would have had to go through Syria, now Ankara may try to negotiate with Saudi Arabia to see that the pipeline goes through Saudi territory, and then through northwestern Iraq, where Turkey is increasing its influence."

According to the expert, the world community would have little recourse to challenge such an 'illegal' pipeline, if the international community's record is anything to go by. Iraqi Kurdistan, she noted, has been selling oil to Turkey for years, with Ankara becoming its most important economic partner, while Baghdad's official protests have fallen on deaf ears.

Noting that Turkey's ambitions extend to most of the former Ottoman Empire, including in the Balkans, where Turkey uses the mechanisms of soft power, Glazova suggested that Erdogan will continue to pursue his imperial policy until he is sanctioned by the international community.

© REUTERS / Ari Jalal
Iraqis Fear US Backs Turkish Land Grab in Mosul Region
"Erdogan will continue to act so long as the international community, via the United Nations, for example, does not expressly condemn Turkish authorities in their support for radical Islamists. In this case, the current Turkish leadership will be completely discredited, and given two options: to change its policy, or resign."

Unfortunately, the expert notes, the West in general and the US in particular react "very selectively" when it comes to Turkey's behavior.

"When the interests of the United States and Turkey coincide (as happened during the so-called Arab Spring, when several countries in the Middle East faced a change of power, not without external help), the West supported Erdogan. When interests do not coincide, the West criticizes Turkey for its growing authoritarianism, for policies which curtail democratic institutions, etc. For example, the US is perfectly aware of Erdogan's long-term support for Islamist groups in the Middle East. Sometimes, the Western media criticizes these actions, but in practice, nothing more is done."

For his part, Mikhail Alexandrov, a leading expert at the Center for Military and Political Studies at the Moscow State Institute of International Relations, suggests that Ankara's moves only serve to further US interests, given Washington's desire to limit Tehran's influence in Iraq and throughout the region.

In addition to providing support for radical Islamist groups which threaten Damascus and Baghdad, "the US, in the interest of limiting Iran's influence, also supports the Iraqi Kurds."

"Formally, Alexandrov notes, "Washington supports Iraq's territorial integrity, because otherwise they will be seen as the power which invaded and destroyed a country. An open partition of Iraq would only further undermine the US's authority, including in the eyes of its allies. Therefore, the US supports the forces opposed to Baghdad in an implicit manner."

According to Alexandrov, given that Turkey has become a country which pursues an openly unfriendly policy in relation to Russia, Moscow must find ways to respond. One such possibility, the expert suggests, "is to provide support for Baghdad."

This, he emphasizes, "can only occur after Iraq abrogates its agreement on military cooperation with the US. The Iraqi leadership has already issued statements suggesting the likelihood of such a measure, but they remain fearful that the Americans could stage a coup or strengthen their covert support for Daesh."

"If Russia was able to come to an agreement with Iran on ensuring Iraq's security, in the event of a break with Iraq, a chance would appear to knock Daesh, along with Turkey, out of Iraq. In this case, however, there would be a risk of falling out with the Iraqi Kurds…Given that we cannot know all the details of Kurdish affairs, direct participation in the defense of Iraq, or bombing Turkish positions in the northwest of the country, would not make any sense."

© AFP 2021 / MUSTAFA OZER
Turkey's Open Border With Syria Provides 'Sustenance' to Daesh - US DOS
In such a case, Alexandrov suggests that it is Tehran which "should engage in these Iraqi affairs. Incidentally, Iran has already reduced its supply of gas to Turkey, under the pretext that it has internal supply problems, even if it is obvious that this was revenge for Turkey's actions in Iraq."

Asked whether Russia could use its gas deliveries to Turkey as a way to pressure Ankara, the analyst suggested that while it's true that Russia remains the main supplier of gas to Ankara, "we cannot simply turn off the taps to Turkey, since this will almost immediately lead to Ankara closing the Bosporus. We are close enough to open war as it is. At the moment, we are indicating to Erdogan that if he closes the Bosporus to Russian ships, gas supplies will be halted. In the meantime, we can support Iraq, and limit Turkey's expansion by bombing Daesh. But again, the former will require that Iraq formally renounces its military agreement with Washington."