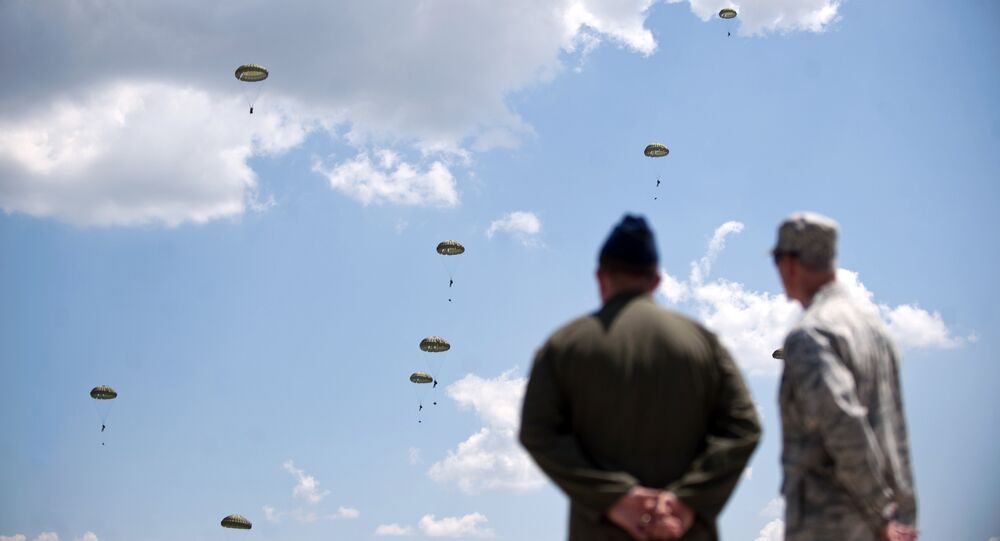 As NATO prepares for its biggest exercises in a decade, we look at what they are meant to accomplish and who they really are (or were at some point) aimed against.

NATO's new Trident Juncture 2015 exercise involving 36,000 troops from 27 countries is meant to exercise a "hybrid warfare" scenario, which NATO claims is a new type of war waged by Russia.

The exercises are ostensibly meant to deal with issues such as the ongoing migrant crisis and Ukraine's Donbass conflict which NATO accuses Russia of participating in, as well as past events such as the Crimean reunification in which Russia deployed special forces to prevent an outbreak of violence on the peninsula ahead of its independence referendum.

"In terms of intensity, this exercise is stronger than NATO has been training [for], perhaps since the end of the Cold War," French Air Force General Jean-Paul Palomeros said, as quoted by DefenseOne.

© AFP 2021 / PETRAS MALUKAS
US Increasing Capabilities to Counter Russia’s 'Hybrid Warfare'
But in a world where "I want it done yesterday" is increasingly the norm, the impressive size scope of the exercise appears more to be overshadowed only by its futility.

The exercise does not appear to pose a credible threat to Russia or the world as exercises near Russian borders, which a recent report from the European Leadership Network think tank pointed out. However, it is also unclear what actual goals the exercise is meant to accomplish.

Analysts in NATO itself have questioned whether "hybrid wars" are even real, and all descriptions of them coming out in the past year appear to be based on past conflicts.

The term "hybrid war" does not appear to be used in Russian until 2009, when an article in Vzgyad discussed hybrid warfare as a new direction in US military strategy.

The issue may have been raised in Russian military circles. In a new book by political expert Gleb Pavlovsky, recently discussed in a New York Times opinion piece, Pavlovsky notes that in the ideologically stifling climate of the Soviet Union, military strategy largely depended on US textbooks for development, as they did not have to legitimize every chapter with a relevant Lenin quote. The trend of reading American textbooks may well have lingered.

Probably the strangest, and most frequently cited driver for the development of "hybrid warfare" is the so-called "Russian cyber-attack on Estonia." During Estonian police crackdowns on protests against the moving of a Russian World War II from Estonia's capital, Russian Internet users launched distributed denial of service (DDoS) attacks against Estonian government websites.

Estonia then accused the Russian government of the attacks because a handful of sources included government addresses, which could mean as much as someone using Wi-Fi in a building lobby to launch an attack from their laptop. The whole story is fake, actual cybersecurity experts, including Estonians said so, though few listened and the "Russian cyber-attack on Estonia" became a part of Western media and NATO lore.

© AP Photo / Mindaugas Kulbis
Why Neocons Want Putin to Invade the Baltics
There does not even seem to be a prospect for "hybrid war" with Russia, as the National Interest recently examined, as Russia, simply put has no prospects or will to repeat the Crimea operation outside of Crimea. Russian Presidential Chief of Staff Sergei Ivanov recently summed up the idea of Russia invading the Baltics as "sick," even as it allows those states to dictate NATO and US policy.

An article in Saturday's New York Times look at why the US has fallen behind Russia in Arctic exploration and security. Although it may seem like bureaucratic lagging, the reasons for this are more clear if one looks at the reaction to Russia's snap drills in March 2015.

Nearly all analyses of the drills called it a simulated conflict with NATO, or even an invasion of states around the Baltic Sea, from the European Leadership Network, to Stratfor, to Edward Lucas. None of the analyses appeared to significantly look at the Arctic aspect of the exercises, making the "surprise" of Russia's long-declared interest in the Arctic all the more surprising.

© AP Photo / Emilio Morenatti
Europe's Migrant Crisis Caused by West's Destabilization of Syria – Le Pen
Despite "climate change denial" talk often coming out of Washington, the CIA has continued extensive research on climate change over the decades. The much-troubled program was shut down again in May, for unclear reasons.

The program could have been useful for predicting the current migrant crisis in Europe, had it not been partially shelved during the George W. Bush administration. It's unknown if it had any impact on the US' Syria policy, as after-the fact analyses have called the country's civil war a result of drought and subsequent urban migration.

Maybe that's why Putin keeps "winning" in Western media headlines, his people seem to read textbooks instead of the modern Lenin quotes of climate change denial and media disinformation dictated by a weak ally turned into policy.