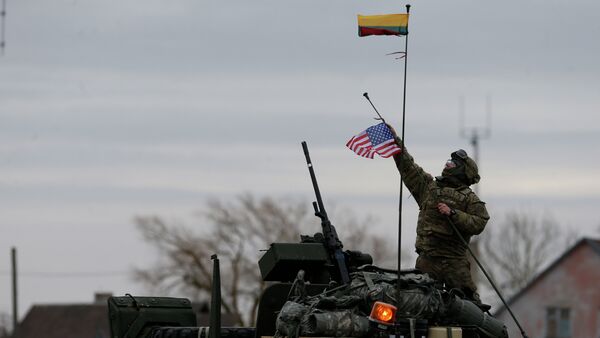 We examine why the claims that a confrontation between Russia and Northern European states is apparently inevitable are a road to increased tensions, and the ideologies behind them.

A new article in Politico.eu suggests the idea that a Russian invasion of Baltic states is somehow inevitable, and that military escalation in the region is therefore necessary.

The article is very transparent about a desire to militarize the region, a process already underway with increased US troop presence and even military equipment holdings in the states, which are at Russia's borders. The article also raises more questions about the author, Andrew Michta, and his intentions for the region than it does about Russian foreign policy.

Nuclear Buildup in EU: Who Benefits From Aggravating US-Russian Tensions?
In his conclusion, the author makes an assertion that "It is ultimately academic to try to second-guess [Russian President Vladimir] Putin’s ultimate goals" and that "When it comes to Putin’s Russia today, expect the unexpected — or rather more of the same." "The same" in this case is that Russia's 2008 peace enforcement action in the Georgian-Ossetian conflict and the 2014 Crimean reunification somehow predict the inevitability of a Russian invasion of the Baltic states.

The assertion is made based on the idea that Russia's military interests lie in a power projection toward Northern Europe. The modernization of Russia's military, made in response to decades-outdated equipment and internal issues such as hazing and discipline issues, are from this perspective a form of expansion.

The article presents an idea of "a hybrid scenario in which Putin stirred up a Russian-speaking ethic enclave to test NATO’s cohesion and capability to respond." The idea of such a "scenario" by itself makes little sense, as even if the Russian military operation to prevent the escalation of armed violence around the time of the Crimean referendum is alluded to as "hybrid warfare," a military operation in a Baltic state would be practically impossible.

Unlike Crimea, which is a peninsula with only two access points by land, Baltic states are continental and it would be nearly impossible to secure a border. In addition, while Crimea had a political autonomy and a legal basis for the referendum provided for by decree from President Viktor Yanukovych, districts of the Baltic states have no such right. Lastly, the Russian military operation was made within the bounds of an agreement between Russia and Ukraine, and troop numbers stayed within a legal limit, while any sort of military operation in a Baltic state would constitute an invasion.

US Guided Missile Destroyer Takes Part in Naval Drills in Latvia
Even if all these facts are ignored, as they are in certain media narratives and the US military, Russia would need a reason to conduct such operations. Russia doesn't have such a reason because for all their loud politics and maltreatment of ethnic minorities, the Baltic states neither threaten minorities with violent oppression, nor do they pose a military threat to Russia, thanks to the NATO-Russia founding act limiting the expansion of NATO bases.

The push to militarize the Baltic states plays a dual purpose this way. On the one hand, it would create a military threat at Russia's borders, and on the other create a hostage Russian-speaking population torn between supporting their Baltic country's general line and being called a threat to national security for their political views.

The idea of militarizing the Baltic states then begins to look like a wish for a self-fulfilling prophecy of sorts. If the Baltic states come to present a military threat and a humanitarian concern for Russia, tensions between the countries would rise. If policies creating such threats and concerns are implemented, tensions would likely rise just as claimed, but portrayed as a part of "Putin's ultimate goals" and not short-sighted policy by those states and the US.

The recent "Russian propaganda" narrative also plays into this. Creating government-funded Russian-language media targeted at Russian-speaking minorities in the Baltic states, as well as the (rather admirable) idea of creating an entire Russian-language university outside of Russia. Without going into the historical depths of Russian identity as it transitioned from one based on language to one centered on religion, and lastly, a secular nationality, the efforts begin to look like an attempt to create an alternative Russian society.

McCain: US Must Improve Propaganda to Win Cold War Without Firing a Shot
At this point, it becomes unclear why Russia has been increasingly called an "existential" threat to the United States and the Western world. An element could be in neoconservative ideology, which the author of the article appears to espouse.

The apparent preoccupation with Russia (and also the Middle East) for neoconservatives, which no looks more like a relic of the Cold War, appears to have arisen in the 1970s, when the 1973 oil crisis and tensions with the Soviet Union largely shaped American foreign policy.

Despite the massive changes to the world since then, the idea and others like it prominent for policy circles in Washington and receives support from private interests which stand to gain from such fields as oil extraction and military contracts. Even with recent events as the shale oil boom in the US, which reshaped the international oil and gas markets, and the US "pivot to Asia," the looming TPP (Trans-Pacific Partnership) deal, the preoccupation with Russia continues to drive a wedge between the two countries. In short, expect the unexpected — or rather more of the same.