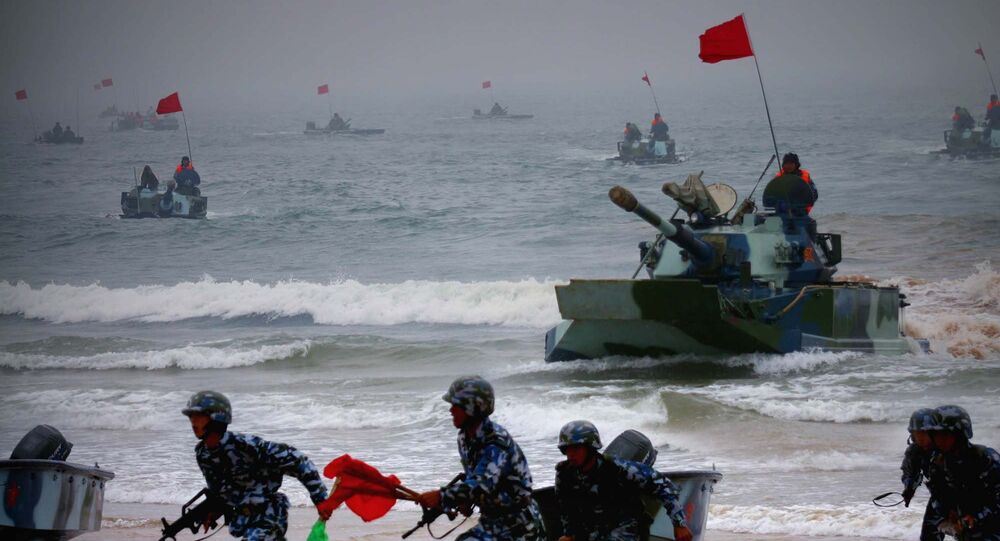 As Russia and China announce their plans to conduct joint military drills in the Peter the Great Gulf, the largest gulf of the Sea of Japan, Washington's strategic planners are racking their brains over how to preserve the American status quo in the "increasingly multipolar" world.

"Rising and resurgent powers like China and Russia are not (yet) true peer competitors of the United States, but they increasingly threaten to challenge US primacy in discrete theaters — especially when acting in concert," Peter Harris, Assistant Professor of Political Science at Colorado State University, pointed out.

© AP Photo / Kin Cheung
China Tightens Export Controls on Drones, Supercomputers to Protect National Security
According to the scholar, Washington still considers Russia a "serious potential adversary" and although Sino-Russian fleets "are no match" for the US Navy, a concentration of their naval forces could become a major hindrance to the US' ability to project power in the East Asian region during a "major diplomatic crisis" or "militarized dispute."

"In short, China and Russia are much better placed to deter the US from exerting itself in East Asia when they act together than when either of them acts alone," Harris emphasized.

After holding joint naval exercises in the Mediterranean, Moscow and Beijing are planning to conduct a new round of military drills along the coast of Russia's Primorsky Region, in the Peter the Great Gulf. The exercise "Joint-Sea 2015-II" will take place from August 20 to 28, according to China's Defense Ministry spokesperson Senior Colonel Yang Yujun.

"This exercise is code-named Joint-Sea 2015-II, and the purpose of the exercise is to consolidate and develop the China-Russia all-round strategic coordination partnership, to deepen the pragmatic and friendly cooperation between the Chinese and Russian militaries, and… to further enhance their capabilities of jointly coping with maritime security threats," Yang Yujun elaborated during a monthly Defense Ministry press conference.

© AFP 2021 / AL-WATAN DOHA / KARIM JAAFAR
Russia Concerned Over US Military Buildup, Joint Drills in Asia - Lavrov
Harris noted that the countries do not need to become "firm friends" in order to pose a substantial threat to US dominance in Northeast Asia and beyond. If Sino-Russian strategic interests intersect at a moment when Washington is trying to "assert itself" in the region, the countries may deal a heavy blow to America's geostrategic plans.

US-Russian tensions over Ukraine and Washington's consistent efforts to assert its supremacy in the Asia Pacific region and contain China's political and military rise are only adding fuel to the fire.

The academic doubts that China and Russia will establish an offensive alliance against the United States. "Instead, the more likely danger is that the combined Sino-Russian militaries will require that Washington increase its presence in East Asia" or accept that "Pax Americana" cannot be extended to the regions where "a credible Sino-Russian deterrent exists."

Although the United States has enjoyed pre-eminent position in Asia Pacific since the Second World War, the region's emerging powers are shifting the established status quo, pushing ahead a new multi-polar world order.