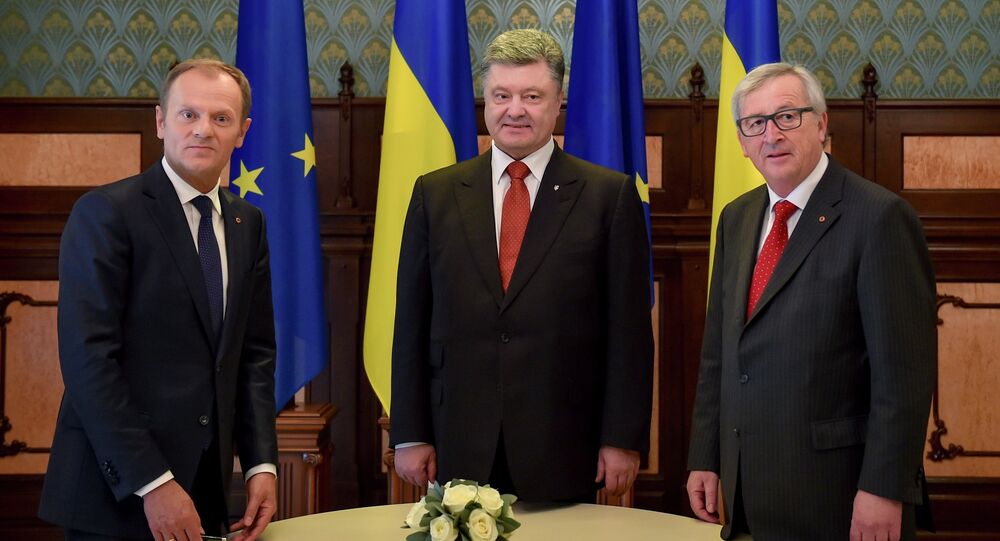 The EU-Ukraine summit held on April 27 was a failure, and the achievement of Kiev's goals, in particular, a visa-free regime with the EU, is further off than before, experts told Ukrainian online news service Apostrof.

"Taking into account that the summit was the first such event after Euromaidan, where citizens of our country gave their lives for the European idea, the results are disappointing," head of the International Centre for Policy Studies, Vasyl Filipchuk told Apostrof.

"In addition to the lack of reforms, the authorities have failed even such an easy task as a visa-free regime."

© Flickr / Viktor Kovalenko
EU Should Slow Down Ukraine Discussions Amid Donbass Conflict
According to the Ukrainian press, President Poroshenko was expecting the European Union to make a decision on granting visa-free access for Ukrainian citizens to the EU, at an Eastern Partnership summit in Riga in May, so that it could be put into practice by the end of 2015.

Back in November 2014 Vasyl Filipchuk, a former diplomat, told the SETimes: "It would be symbolic to get a visa-free regime next year [2015]. Next May it will have been 10 years since we declared a policy of seeking a visa-free regime with the European Union."

© RIA Novosti . Aleksandr Maksimenko
Ukrainian to Become Official EU Language – PM Yatsenyuk
All these hopes appeared to have been quashed when in March this year, Johannes Hahn, a member of the European Commission, working on updating the European Neighbourhood Policy, said the Commission was not ready to consider abolishing the visa regime, and therefore will not be able to discuss granting such a regime to Ukraine and Georgia at the May Summit of the "Eastern Partnership" in Riga in 2015.

To be fair, as early as December last year, Latvian Foreign Minister Edgars Rinkevics did warn that "before being granted such access, Ukraine and Georgia must undertake several reforms, including judicial cooperation with the EU."

Fingerprints Instead of Visa-Free Travel

At first, the issue had seemed to revolve around the availability of biometric passports. "The major obstacle for Ukrainians to travel free to the EU is [the] shortage of biometric documents,"  wrote the Kiev Post as early as 19 September 2014, quoting Oleksandr Sushko, an analyst for the Institute for Euro-Atlantic Cooperation, a Kiev-based think tank. Sushko predicted "it may take up to five years to issue biometric passports," adding that the demand will remain high even when visa-free travel comes into effect.

Ukraine, however, did received $2 million in EU aid to be able to start making the biometric passports required for it to have a visa-free regime with the EU from January 2015.

Worst kept secret at EU-backed #SupportUkraine: this is a conciliation thing for #RigaSummit2015, where Ukraine likely won't get visa-free

The Kiev Post newspaper tried to be realistic when it wrote at the end of last year that "even though the European Parliament ratified the European Union-Ukraine Association agreement, the country may not secure visa-free travel to the EU until early next year."

It certainly could not have imagined that the issue would be put on a backburner, showing how disillusioned the EU has become with Kiev's promises of reforms. In a latest twist to the visa saga, the EU has introduced fingerprinting for Ukrainian citizens applying for EU-wide Schengen type visas.

"We Are Losing Credibility"

© Flickr / Viktor Kovalenko
German MP: Kiev Has Unrealistic Expectations of EU
The Euromaidan movement started in November 2013, when news that Viktor Yanukovych, president at the time, made a decision to postpone the signing of the EU Association Treaty became public.

Euromaidan protesters had been led to believe that, without Yanukovych, Ukraine could have quickly joined the West via the EU. The promise of a visa-free travel to Europe was a major consideration for many protesters as their livelihoods depend on working abroad because of an acute shortage of jobs, mostly in West Ukraine.

Poroshenko calls for VISA-FREE regime for Ukraine with EU. — Last year he promised that it would be so in this May. But Poland says Nie.

Kiev had pinned high hopes on the EU-Ukraine summit. However, given the summit's failure to resolve the issue "every month will only make [the task] more difficult," said Filipchuk said.

"We're losing the credibility that we achieved at the cost of human lives."

Another expert, Volodymyr Horbach of the Institute for Euro-Atlantic Cooperation told Apostrof that relations between Kiev and Brussels have entered a period of stagnation.

"No new messages or new ideas were brought to Kiev by either Tusk or Juncker, as if nothing had happened in the past year."