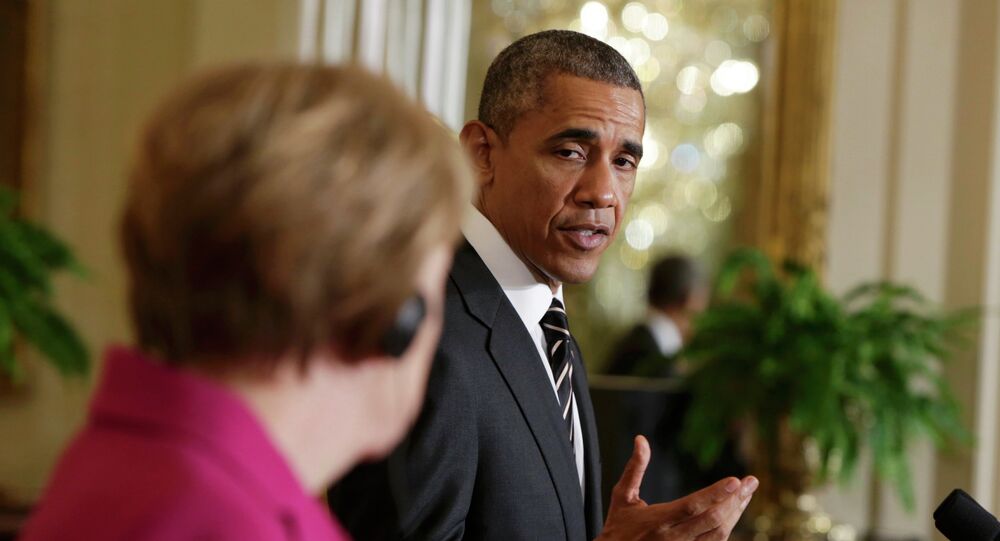 “I'm 80 years old. I was never scared throughout the Cold War years. I'm very scared now.” That is what Stephen Lendman, a Research Associate for the Centre for Research on Globalization told Sputnik in an exclusive interview regarding recent developments related to the military conflict in Ukraine.

Washington under the Democrats or Republicans wants war, not peace, he said. "In the post-9/11 era alone, not a single day of peace has followed. Multiple US direct and proxy wars rage. US Special Forces (trained killers) operate covertly and overtly in over 130 countries disruptively."

‘Ignore What Germany and France Say Publicly; Follow What They Do’

He says that "Merkel and Hollande (Germany and France) are bedrock US-dominated NATO members." "Ignore what they say publicly; follow what they do," he advised. "Throughout the Ukrainian crisis, they haven't gone their own way against Washington…nor has Britain's David Cameron."

"I'm sure Merkel and Hollande tried to get Putin to largely bend to Washington's will; in other words, [they] do nothing to stop its chokehold on Ukraine, including NATO forces encroaching on Russia's borders."

© Sputnik
Still Not a War? German Intelligence Puts Ukraine Death Toll at 50,000
America maintains an empire of bases in over 150 countries, he added, noting that Russia and China are increasingly surrounded by US bases, which he called "so-called defensive missiles for an offense target: their heartlands."

The political analyst said that wars are hugely profitable. "The US-banker led war lobby demands them. Peace is anathema. Putin is right: Russia has been targeted for centuries, more than ever now since Hitler's Barbarossa campaign."

Regarding the role the US left for Russia, Lendman forecast the following.

"America ousted Ukraine's legitimate government," in "the most brazen European coup since Mussolini's 1922 march on Rome. Neo-Nazi thugs run things", Lendman said of the 2014 Maidan events, calling the post-Maidan government there mob rule. "War policy is made in Washington."

"Kiev is a hotbed of fascist, militant gangsterism, murdering its own citizens in Donbas [for] wanting only democratic rights free from Kiev-style tyranny."

"Kiev's military is a proxy US force," Lendman went on. "One observer said America will wage the war down to the last Ukrainian. What's ongoing is a pretext to blame Moscow for US/Kiev high crimes against peace."

"Putin will keep doing what's best for Russia, not America or other NATO countries", the analyst said. However, Lendman greatly fears how things will turn out.

"Washington has been heading for conflict with Russia throughout Putin's tenure."

Lendman says that the US Congress almost universally demonizes Putin, and that the US media has sunk to its lowest depths in his lifetime. He fears a possible US-instigated war with Russia, and suspects a major false flag will be used as justification.