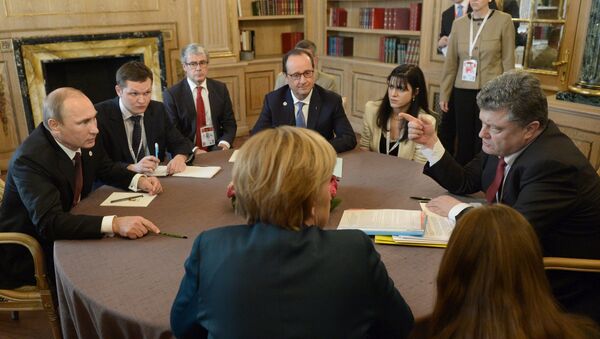 Normandy Four are set to meet in the capital of Belarus on Wednesday in an effort to halt escalating violence in eastern Ukraine.

The leaders of the so-called Normandy Four – Russia, Ukraine, Germany and France have agreed to meet in the Belarus capital on Wednesday.

President Putin, however, stressed that the countries have to agree on several issues beforehand.

"I have finished the talks with my colleagues from Kiev, Berlin and Paris in the so-called Normandy format. We have agreed to try to organize a meeting in the same format between the heads of states and governments in Minsk, we will try to make it on Wednesday, if certain issues would be agreed upon by that date," Putin said during his meeting with Belarusian President Alexander Lukashenko.

The aim of the upcoming meeting is to draw up a package of measures that injects life in the much-violated September peace plan.

Vladimir Putin, Petro Poroshenko, Angela Merkel and Francois Hollande held telephone talks on Sunday as part of efforts to try to halt the escalating violence in eastern Ukraine.The talks have been described as intensive by German Chancellor spokesman Steffen Seibert.

Prior to the scheduled talks, Chancellor Merkel will visit Washington on a previously arranged trip and meet with President Obama.

Deputy heads of the four countries foreign ministries are set to hold a separate meeting in Berlin on Monday. The outcome of this meeting will play a large part in determining the success of Wednesday's meeting of the Normandy Four.