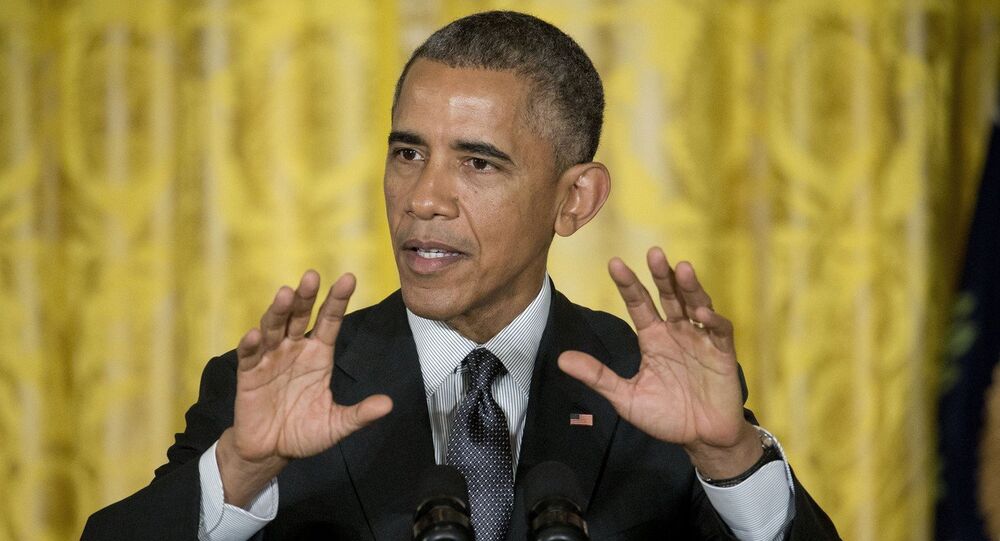 US President Barack Obama revealed the United States' involvement in the Ukrainian crisis from its outset and admitted that the United States “had brokered a deal to transition power in Ukraine.”

© AFP 2021 / NICHOLAS KAMM
Obama May Have Been Kept in Dark Over Planned Ukraine Coup
MOSCOW, February 2 (Sputnik) — US President Barack Obama’s recent interview with CNN’s Fareed Zakiria reveals the United States' involvement in the Ukrainian crisis from its outset and that the country worked directly with Ukrainian right-wing fascist groups, experts told Sputnik.

On Sunday, in his interview with CNN, Obama admitted that the United States “had brokered a deal to transition power in Ukraine.”

“Obama’s statement is reiterating something that the world public opinion already knew — the US was involved in the coup of [ex-Ukrainian President] Viktor Yanukovych from the start. History shows us that the US has overthrown numerous governments in Latin America, Asia and Africa and replaced them with leaders that ruled with a fascist ideology that proved useful for Washington’s geopolitical interests,” independent researcher and writer Timothy Alexander Guzman told Sputnik.

Yanukovych's decision to not sign an association agreement with the European Union in late 2013 triggered a mass wave of protests across Ukraine, culminating in the February 2014 coup. Following the transition of power, Kiev forces launched military operation against those who refused to recognize the legitimacy of the new government.

International law professor at the University of Illinois College of Law Francis Boyle shares a similar opinion, also arguing also that Obama’s approach to Ukraine is no different to the neoconservative approach of former US national security adviser Zbigniew Brzezinski, or political scientist Samuel Huntington’s "clash of civilizations" philosophy.

“I think he [Obama] has made it very clear that he is going to continue to take a Brzezinski hard-lined approach toward Ukraine and Russia and that there are not going to be any compromises at all, and effectively he expects President Putin to throw in a towel, capitulate, whatever, it does not appear to me there is any ground for negotiations in light of what President Obama at least said publicly,” he said in an email to Sputnik.

The expert also claimed that Obama’s ignorance of the Minsk agreements and of Russian President Vladimir Putin’s proposals to negotiate the conflict peacefully, indicates that Washington is going to continue with its aggressive policy in Ukraine.

“How can Russia tolerate this gang of Nazis in Kyiv [Kiev] setting up shop right there on the borders of Russia, and being armed, equipped and supplied by NATO? Of course, Russia cannot tolerate that,” Boyle concluded, adding that the Unites States itself would not tolerate such threats close to its borders.

© AP Photo / Peter Parks
Obama & Merkel to Discuss Arming Ukraine in Washington Next Week
"The very fact that Obama feels he needs to comment on [the] US direct role in the regime change [in Ukraine] and on Putin's response over Crimea in this manner, rather than calling Putin a Hitler with well thought out expansionist designs, as has become the norm in the US, speaks for itself: perhaps, the White House is finally coming to the view that it needs to come to its senses and negotiate with Moscow," Vlad Sobell, a professor at New York University's Prague campus stated.

On Sunday, US President Barack Obama, in an interview with CNN's Fareed Zakiria, explained that the United States “brokered a deal to transition power in Ukraine.” The US President said that Russian President Vladimir Putin made his decision to legally annex Crimea "not because of some grand strategy, but essentially because he was caught off-balance by the protests in the Maidan."

In late 2013 a decision by Ukraine then-President Viktor Yanukovych to avoid signing an association agreement with the European Union triggered mass protests across Ukraine, dubbed Maidan, culminating in the February coup. Following the coup and a rise in aggressive nationalism in the country, Crimea seceded by referendum from Ukraine and rejoined Russia in March 2014.

© AFP 2021 / Brendan SMIALOWSKI
Former US Officials Urge Washington to Send Lethal Military Aid to Ukraine
Pepe Escobar, a correspondent for Asia Times, Hong Kong, who has closely followed developments in Ukraine, told Sputnik of his belief that every independent observer, including himself, "had known from the beginning those $5 billion, [US Assistant Secretary of State] Victoria Nuland's number, over the years unleashed to boost 'freedom' in Ukraine one day would come to fruition."

"And Putin was not 'caught off-balance’,” Escobar added. “Russian intelligence knew in a few hours that Maidan would be replicated in Crimea, so the Kremlin acted swiftly," he stated.

Professor Sobell claims that "Mr President [Obama] should be aware that Yanukovych fled [Ukraine] because he had solid reasons to fear for his life. The hallowed Maidan was not a peaceful democratic regime change, as it was presented in Western media, but a violent putch complete with murderous acts by hired assassins.”

What do you think is the most important event of the week?
Voted: 1
All polls
Sobell states that unnamed EU officials affirm that on February 20 snipers shot both demonstrators and police dead, in order to provoke chaos. These crimes, he continued, are not being investigated by Kiev's "democratic — Western values" regime or its Western sponsors, as "today it is ok to install a Nazi-driven regime by these means and then demand that Western tax- payers support it."

According to Escobar, the way the Ukrainian coup will be perceived "all across the Global South is […] another US regime change operation, using local patsies."

Commenting on the recent increase in hostilities between Kiev and independence supporters in the southeast of Ukraine, Sobell said the situation has changed in favor of the Donbas militia.

"Washington knows it and knows that they must either compromise, start genuine negotiations with Moscow and separatists, or escalate support for the Nazi regime by supplying it with arms. This would lead to major escalation of the conflict – at this point we cannot rule out that Obama will opt of this," Sobell insisted.

Russia's relations with the West deteriorated sharply in 2014, following Crimea's reunification with Russia and the start of the ongoing military conflict in Ukraine. The United States and its allies accused Moscow of interfering in Ukraine's internal affairs and imposed several rounds of economic sanctions, targeting Russia's energy, banking and military sectors, as well as several high-ranking individuals.