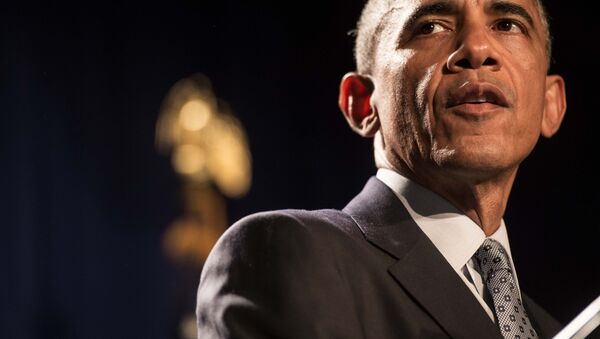 There is a possiblity that US President Barack Obama wasn't informed about the plan to overthrow the Yanukovych government in Ukraine, according to former Assistant Secretary of the Treasury Paul Craig Roberts.

WASHINGTON, February 2 (Sputnik) — US President Barack Obama might not have been informed by his foreign policy officials about a plot to overthrow the Yanukovych government in Ukraine, but he is definitely behind the approval of the post-February 2014 coup decisions, former Assistant Secretary of the Treasury Paul Craig Roberts told Sputnik.

Obama Admits US Role in 2014 Ukraine Coup
"It is possible that Obama was told that Yanukovych was corrupt and a Russian stooge and that the Ukrainian people rose up against him and drove him out of office," Roberts said, adding that such an explanation more or less coincides with the Western media reports. "So, Obama could have been caught off guard by events, but the neoconservatives in control of Obama's government's foreign policy were not caught off guard."

Roberts noted that neoconservatives occupying powerful positions in the executive branch of the US government can impose their agenda regardless of the views of the president.

''While Russia was preoccupied with the Olympics, the neoconservatives launched their coup in Ukraine," he asserted. "I do not know whether Obama knew about the coup. I do know that it was not necessary for him to know about it, because the neoconservatives control the information flow."

In a recent interview with CNN, Obama claimed that Russian President Vladimir Putin made his decisions on Crimea after being caught off-guard by mass anti-government protests on Kiev's Independence Square, as well as by then-President Viktor Yanukovich fleeing, after the West "had brokered a deal to transition power in Ukraine."

"What is the meaning of Obama's CNN interview? Obama cannot help but know of the US government's involvement once the coup occurred," Roberts stressed, reminding the intercepted telephone call in which Assistant Secretary of State Victoria Nuland and the US ambassador in Kiev discussed who they intend to install as the new Ukrainian government. "Certainly Obama knows it, because once the coup occurs, post-coup decisions have to be made that cannot be made without the president."

The former US official said that the information that reached Obama was that by overthrowing the Yanukovych regime, the Ukrainian people created an unstable situation that the Russians are exploiting, and in order to stop an alleged Russian takeover of Ukraine, his government had to take action.

"This kind of approach to Obama guarantees his approval. Otherwise, the neoconservative beat the drums against him," he explained.

Roberts thinks that the point of the neoconservatives' coup in Ukraine was "to take Russia down a peg or two."

"Under Putin's leadership, Russia had reappeared as a constraint on the unipower's power," Roberts said. Putin found diplomatic solutions that blocked Washington's planned invasion of Syria and Washington's planned bombing of Iran. In the neoconservative ideology, no country is permitted to rise to the capability of blocking Washington's will."

The former US official claimed that the neoconservatives' plan was to take control over Ukraine evicting Russia from its major naval base in Crimea, thus cutting it from the Mediterranean and its naval base in Tartus, Syria.

Mass protests erupted in Ukraine after Yanukovych refused to sign an association agreement with the European Union. Weeks of violent protests resulted in his ouster and the installation of a pro-Western government backed by Brussels and Washington.