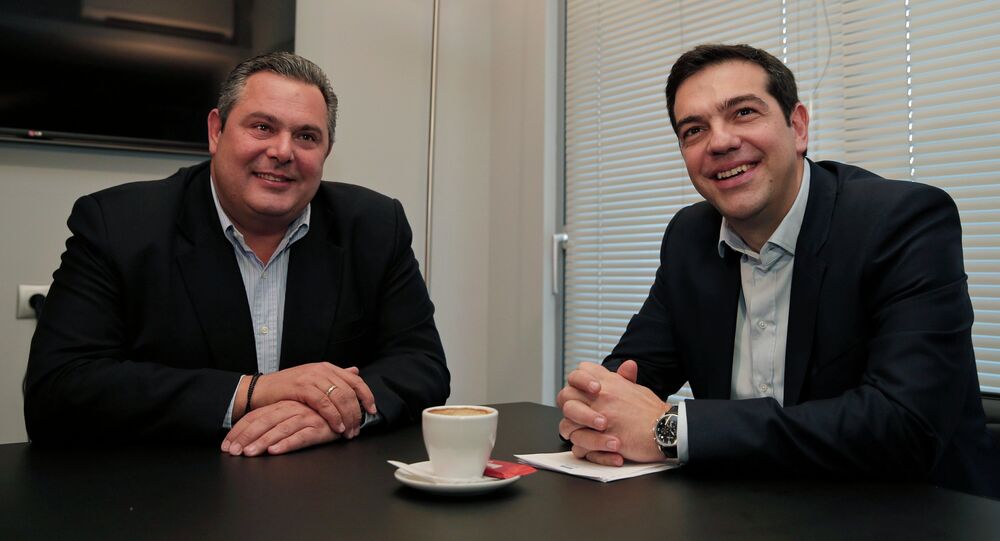 Having gained 149 seats, two short of an absolute majority, at Sunday's parliamentary elections in Greece, far-left Syriza has formed a coalition with the Independent Greeks, a nationalist right-wing party.

"It is very difficult to see how such a heterogeneous coalition would survive beyond a period of a few months. Mr Kammenos' party [Independent Greeks] has a track record of xenophobic and anti-immigrant policies, whereas, for example, Syriza has traditionally supported giving second generation migrants Greek citizenship," Roman Gerodimos, principal lecturer in global current affairs at the Media School at Bournemouth University and Founder of the Greek Politics Specialist Group (GPSG) of the UK Political Studies Association, told Sputnik

"Furthermore, there are many within Syriza — and in particular some far-left fractions — that will be very uncomfortable supporting a government that includes far-right ministers," he added.

© AFP 2021 / ANGELOS TZORTZINIS
'Independent Greeks' Bow Out of Coalition Talks With 'River Party'
The viability of the coalition depends on a number of factors, according to Achilles Skordas, professor of international law at the University of Bristol. Primarily, it is contingent on the new government's ability to find a compromise with its European partners on rescheduling or cancelling part of the Greek debt.

"The coalition itself seems to be a marriage between two parties with little in common. However, we should consider that the Independent Greeks are a rather opportunistic party, which will not struggle on many issues of principle. They are an anti-austerity party, but beyond that point I do not think that they will engage in any ideological fight with Syriza," Skordas told Sputnik.

© East News / Yannis Kontos/Polaris
Syriza Leader Tsipras Tasked With Forming Government
Therefore, the common agenda may push the ideological differences between the two parties to the sidelines, at least in the beginning, according to the expert.

"I do not think that the coalition will be threatened by an internal fight, at least in the first phase of the new government," Skordas stated.

At the same time, the efficiency of the new Greek government may be threatened by internal problems within Syriza, which lacks cohesion itself.

"I am more worried about the stability and the decision-making capacity of Syriza itself, as Syriza includes many different groups. Some of them are ideologically hard leftist groups and neo-communist groups, and it will be difficult to devise a policy that makes sense, precisely because these groups will want to own part of the program," Skordas speculated.

The expert also does not exclude the possibility that the ill-formulated economic policy of the new government may eventually lead to Greece's exit from the eurozone "by accident".

Do you believe SYRIZA can fix Greek economy?
Voted: 1257
All polls
According to the election's official results, radical left-wing party Syriza gained 36.34 percent of votes and secured 149 out of 300 seats in the parliament. A total of seven parties passed the threshold to be included in the Greek parliament. Current Prime Minister Antonis Samaras' New Democracy party garnered 27.81 percent, winning 76 parliamentary seats.

"It is interesting that New Democracy has more or less maintained its core support, even after two and a half years of austerity policies," Roman Gerodimos told Sputnik, commenting on the elections' results.

"It is worth noting that the neo-Nazi Golden Dawn managed to end up third, which is mainly due to the decline of all the other parties (Golden Dawn actually lost about 20 percent in absolute votes but other parties lost even more)," Gerodimos added.

As for the centrist parties, in the current context, this part of the political spectrum is "highly fragmented", according to Gerodimos, with the center-left River, socialist PASOK and social-democratic KIDISO parties getting a total of 13 percent of votes.