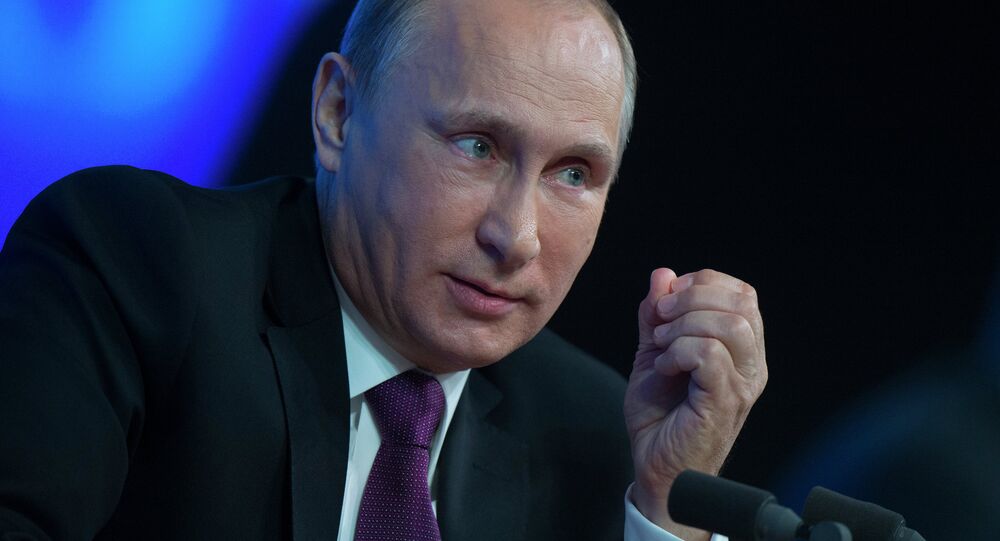 Moscow to Maintain Position on Ukraine Amid Pressure

Experts commented on the Russian President Vladimir Putin’s annual press conference in Moscow, saying that the relations between Russia and the United States can be restored.

© AP Photo / Susan Walsh
Obama Signs Ukraine Freedom Support Act Out of Political Necessity:Scholars
WASHINGTON, December 19 (Sputnik) — Moscow will not give in to the Western pressure over the Ukrainian conflict. However, the relations between Russia and the United States can be restored, experts told Sputnik News Agency.

The comments come after Russian President Vladimir Putin’s annual press conference in Moscow, during which he covered various issues including the ongoing conflict in Ukraine and Russia’s relations with the West.

“His [Russian president's] main point was to reaffirm that Russia would not allow economic difficulties, precipitated by Western sanctions, as well as the declining price of oil, to force it to change course in defense of its national interests and sovereignty,” Henry Srebrnik, political science professor at the University of Prince Edward Island (UPEI) told Sputnik Thursday.

© REUTERS / Hannibal Hanschke
If Putin Stands for Ukraine's Integrity, His Words Should be Trusted:Merkel
“Russia will not allow the people in Donetsk and Luhansk to be crushed by the Kiev government,” Srebrnik added.

During the press conference Putin said that he believes Ukrainian President Petro Poroshenko is willing to restore peace in his country, but a number of other senior officials oppose the idea.

Srebrnik said that the West continues continue to take a “one-sided position”, insisting that Russia is behind any violence that has ensued in Ukraine.

“Poroshenko does not have full control over the situation, and there are those in Kiev who want to conquer the eastern regions by force, rather than negotiate with the people there, and in this they are being encouraged by the way the EU and NATO refuse to see any justice in Russia’s concerns,” the analyst said.

© REUTERS / Doug Mills/Pool
Ukraine Freedom Support Act Authorizes Economic Confrontation With Russia
John Quigley, Emeritus Professor at the Ohio State University also stressed that Kiev seems to understand the need for the certain measures in the country, which will likely lead to the restoration of Russia-West relations.

“I think that the Government of Ukraine is coming to realize the need for some measure of autonomy there and for the protection of the Russian-speaking population,” Quigley told Sputnik Thursday.

“If that can be achieved, there should be no impediment to a significant improvement in relations between Russia and the West,” Quigley added.

“I think that the West overreacted to the Crimea situation, and that from that time the deterioration started. Now it is the conflict in the eastern sectors of Ukraine that is the flashpoint,” he added.

© Sputnik / Sergei Pyatakov
Good Relations Between US, Russia ‘Can Happen Again’: Former US Ambassador
The professor noted that there is much in favor of the relations’ improvement, including strong economic ties, ties in the space program, as well as ties in seeking stability in countries of the Middle East.

“I think that the current hostility in the relationship between Russia and the West is not inevitable,” Quigley concluded.

US President Barack Obama announced that he signed the Ukraine Freedom Support Act into law on Thursday. The bill authorizes providing lethal assistance and aid in energy and defense sectors, as well as civil society, to the Ukrainian government and imposing a new round of economic sanctions on Russia.

The relations between Russia and the West deteriorated amid the Ukrainian crisis. The European Union and the United States have been hitting Russia with sanctions over Moscow’s alleged role in the Ukrainian crisis. Western sanctions have targeted Russia’s largest banks, energy and defense companies, as well as some individuals. Moscow has repeatedly denied the allegations.

Putin: Poroshenko Seeks Peace in Ukraine, but Many Others Want War