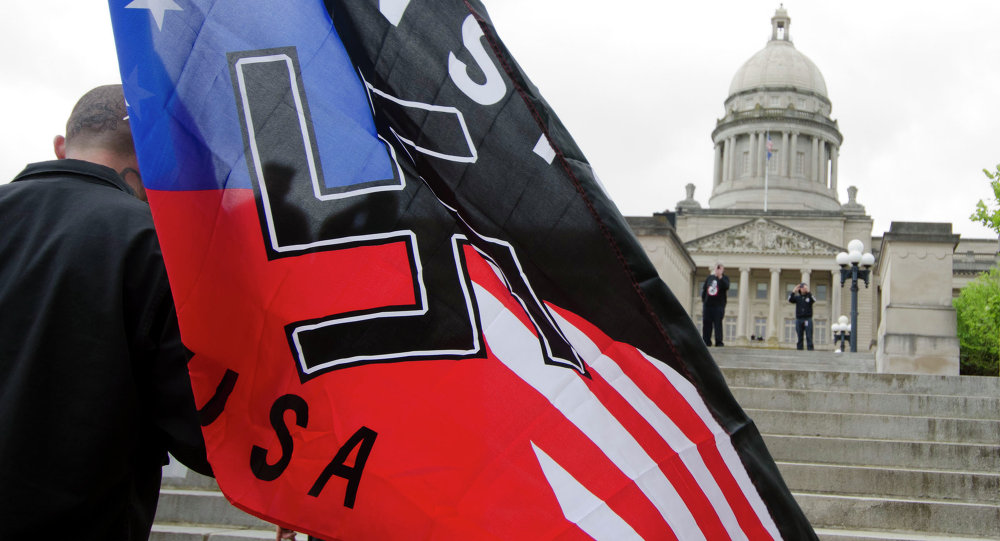 US Votes Against Anti-Nazi UN Resolution

The US and its Ukrainian and Canadian allies voted against a UN Resolution condemning Nazi glorification and the denial of Nazi war crimes. It’s really not that unexpected, though, since the US has a dirty history of cooperating with Nazi elements, especially in the modern day.

America played its part in fighting fascism in Europe, but the lessons of the past seem to have been lost on the present. Actually, it’s arguable whether those lessons were ever learned in the first place, since the US recruited former Nazis to work in its laboratories and intelligence agencies right after World War II ended. Some suspected Nazi war criminals even receive Social Security payments to this day. But if in the past this cooperation stayed in the shadows, nowadays it’s on full display as a geo-social weapon aimed against Russia.

Rabble-rouser John McCain traveled to Kiev last December and met with Oleh Tyahnybok, an extreme far-right Ukrainian politician accused of being a rabid anti-Semite that glorifies the country’s Nazi past. Not exactly what comes to mind when one thinks of ‘freedom fighter’, does it? The fact that a senior American policymaker and former presidential candidate would travel to the frontlines of a regime change operation to support a Neo-Nazi figure surely is symbolic, especially when this elicited no condemnation whatsoever from the American government. So serious were the accusations that the US backed Neo-Nazis during the illegal overthrow of President Yanukovich’s government that the issue was even brought up in May during a House Foreign Affairs Committee meeting with Victoria Nuland, who expectedly denied the accusations.

Still, that didn’t halt de-facto American support to Nazi elements in Ukraine. During and after the Ukrainian Civil War, the US provided millions of dollars of non-lethal assistance to Kiev’s forces, including the Neo-Nazi-filled National Guard. Furthermore, Kiev is now talking about formalizing the integration of ‘volunteer militias’ like the Azov and Dnipro Battalions, Nazi-glorifying right-wing extremist groups, into the country’s military, thus meaning that American-funded resources will be at their ready disposal. Could this have been what Washington had in mind when it invested $5 billion in Ukraine to “[support] the Ukrainians in the development of democratic institutions and skills in promoting civil society and a good form of government”, as Nuland said in February?

…To the Baltics and Beyond

The US’ implicit support of Nazism’s revival extends further than Ukraine and into the Baltics. It’s no secret that Latvia and Estonia, both important NATO allies in the ‘New Cold War’, openly celebrate Nazi veterans with highly publicized parades and commemorative events, viewing them to be patriotic ‘liberators’ against ‘Soviet oppression’. Yes, that’s right – in the name of ‘nationalism’ and anti-Russian historical interpretations, some modern-day European countries proudly stand with the Nazis, and the US has no qualms about having them as allies. It’s quite the opposite, actually, since the US is actively boosting its military cooperation with them in order to ‘counter Russia’, and it could care less whether or not they idolize the Third Reich or restrict Russians living there from voting (like in Latvia). Unlike Egypt, for example, which temporarily saw its joint military cooperation with the US halted over concerns about democracy, no such restrictions exist for the Nazi-glorifying Baltic States in the name of 21st-century Russian containment.

America’s policy of supporting Nazi-inspired movements and governments in Eastern Europe actually looks like it’s expanding into the Balkans. Albanian nationalists staged a racial provocation by flying a Nazi-era flag of ‘Greater Albania’ over a Belgrade football match last month, creating a massive scandal that many outlets in the West misleadingly and purposely blamed on Serbia. The most likely explanation is the onset of a new information campaign against Serbia, NATO-ally Albania’s geopolitical rival that is a close strategic partner of Russia. Serbia is envisioned to serve as the hub for the South Stream gas pipeline that will relieve Europe’s dependence on Ukrainian-transited gas and help it achieve greater energy security. However, because it’s sponsored by Russia and bypasses American-influenced Ukraine, the US is absolutely against it and thus has a motive in using historical Nazi-related concepts such as ‘Greater Albania’ to destabilize Serbia. One must not forget that the US bombed Serbian positions in Bosnia in 1995, attacked the country itself in 1999, and was the prime actor in recognizing the Serbian Province of Kosovo’s ‘independence’ in 2008. How’s that for a history of hostility?

Back To A History of Hate

Linking the US’ support of Nazi movements in Ukraine, the Baltics, and Albania together is a simple reasoning – these groups’ revisionist tendencies (be they historic, social, or geographic) are directed against Russian interests. The Ukrainian and Baltic Nazis hate Russians and anything associated with them, making them obvious (albeit completely unethical) allies in a new soft war against Russia. With Albania, its version of the Neo-Nazi movement wants to swallow territory from neighboring Montenegro, Serbia (Kosovo), and Macedonia, in a move that would surely destabilize the entire Balkans and put major infrastructure projects like the Russian-led South Stream on halt.

The US understands that historical legacies run deep, and that the hate of the past can be resurrected for strategic use in the present. Surrounding Russia with a wall of Neo-Nazi states and their supporters destroys any opportunity for those countries and their people to ever constructively interact with one another, which for the US, conveniently means a 21st-century containment strategy through 20th-century ideological means. If it wasn’t clear before, then it should be now – no cards are off the table in this ‘New Cold War’.