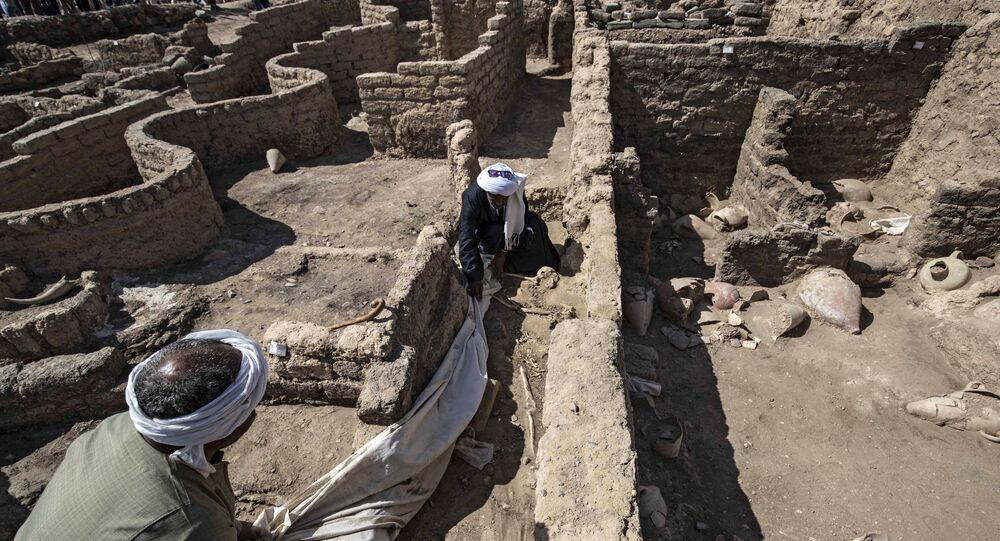 CAIRO (Sputnik) - Tourists will have an opportunity to see a 3,000-year-old lost "golden city" that has been recently uncovered by Egyptian archaeologists no earlier than in three years, as only 30 percent of the ancient city has been discovered so far, Fathi Yassin, the director general of west bank antiquities in Luxor, told Sputnik.

"I believe that it will not open to tourists in the next three archaeological seasons [lasts from September to May], since no more than 30 percent of the city has been discovered. The excavations will continue in the coming seasons", Yassin said.

According to the archaeologist, the find is unique, as it gives insight into the technology of construction and the planning of settlements and residential quarters in ancient Egypt.

"Everything that has already been discovered is of great value and goes back to the period of the reign of Amenhotep III", he said. Amenhotep III is the ninth pharaoh of the famous 18th dynasty, who ruled from 1391 to 1353 BC.

© AFP 2021 / KHALED DESOUKI
A picture taken on April 10, 2021, shows a worker carrying a pot at the archaeological site of a 3000 year old city, dubbed The Rise of Aten, dating to the reign of Amenhotep III, uncovered by the Egyptian mission near Luxor. - Archaeologists have uncovered the remains of an ancient city in the desert outside Luxor that they say is the "largest" ever found in Egypt and dates back to a golden age of the pharaohs 3,000 years ago. Famed Egyptologist Zahi Hawass announced the discovery of the "lost golden city", saying the site was uncovered near Luxor, home of the legendary Valley of the Kings.

"Therefore, in the coming seasons, we expect new discoveries in these areas, possibly including tombs", Yassin added.

The archaeologist recalled that Amenhotep III ruled Egypt during the peak of its prosperity. The son of Amenhotep III, Amenhotep IV, known as Akhenaten, moved the capital of the ancient Egyptian state to Tell El-Amarna and sought to introduce the cult of the one sun god.

"Based on this, it is possible that religion originated from Thebes, and not ... Tell El-Amarna", Yassin continued.

The director general of west bank antiquities in Luxor also refuted allegations that the lost "golden city" was actually discovered by French archaeologists in the 1930s.

He explained that the rediscovered site is located very far from what was unearthed by a French archaeologist in 1936.

On Thursday, the Egyptian Ministry of Tourism and Antiquities revealed to the world the city that had been buried under sands near the modern-day city of Luxor for over 3,000 years. The largest ancient settlement ever discovered in Egypt was uncovered by a team led by archaeologist Zahi Hawass in September. Hawass told Sputnik earlier in the week that it would take at least 10 years to fully excavate the ancient city, dubbed The Rise of Aten.