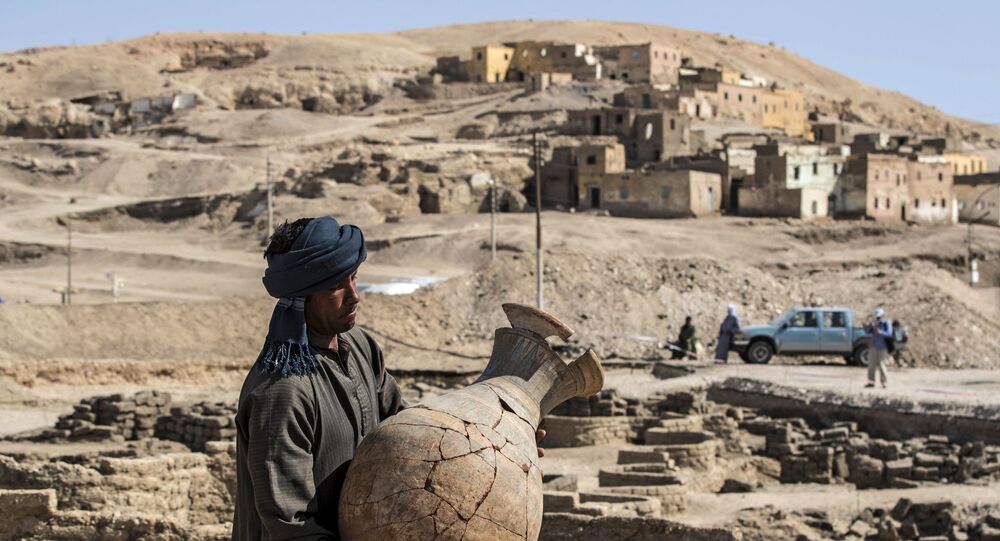 LUXOR (Sputnik) - It will take archaeologists at least 10 years to fully excavate the recently discovered ancient city, dubbed The Rise of Aten, that had been buried under sand in modern Egypt's eastern Luxor Governorate for over 3,000 years, lead archaeologist Zahi Hawass told Sputnik.

On Thursday, the Egyptian Ministry of Tourism and Antiquities said that an expedition led by Hawass, the former minister for antiquities affairs, had discovered a city on the west bank of the Nile near Luxor. It is the largest ancient settlement ever discovered in Egypt.

The 3,000-year-old city is believed to have been founded by 14th century BC pharaoh Amenhotep III and remained active throughout the reign of pharaoh Tutankhamun and his successor Ay.

"This is a full-fledged city, it is considered to be the largest ever discovered settlement ... The work will last at least 10 years, since we need to excavate the entire city, as well as the area of temples", Hawass said.

According to the scientist, there are three quarters in the city where there are premises for storing meat and areas where clothes and raw bricks were produced.

"We expect to move toward the temple area by September", Hawass added.

© AFP 2021 / KHALED DESOUKI
A picture taken on April 10, 2021, shows a view of a 3000 year old city, dubbed The Rise of Aten, dating to the reign of Amenhotep III, uncovered by the Egyptian mission near Luxor. - Archaeologists have uncovered the remains of an ancient city in the desert outside Luxor that they say is the "largest" ever found in Egypt and dates back to a golden age of the pharaohs 3,000 years ago. Famed Egyptologist Zahi Hawass announced the discovery of the "lost golden city", saying the site was uncovered near Luxor, home of the legendary Valley of the Kings.

The team began excavations last September, and in a matter of weeks, they uncovered mud brick structures spreading in all directions. According to the Egyptian ministry, archaeologists ultimately dug up the site of a large city preserved in good condition, with relatively complete walls and living units that still contained everyday instruments. Sixty archaeological missions previously worked, unsuccessfully, at this site, according to Mostafa Waziri, the secretary-general of the Supreme Council of Antiquities of Egypt.