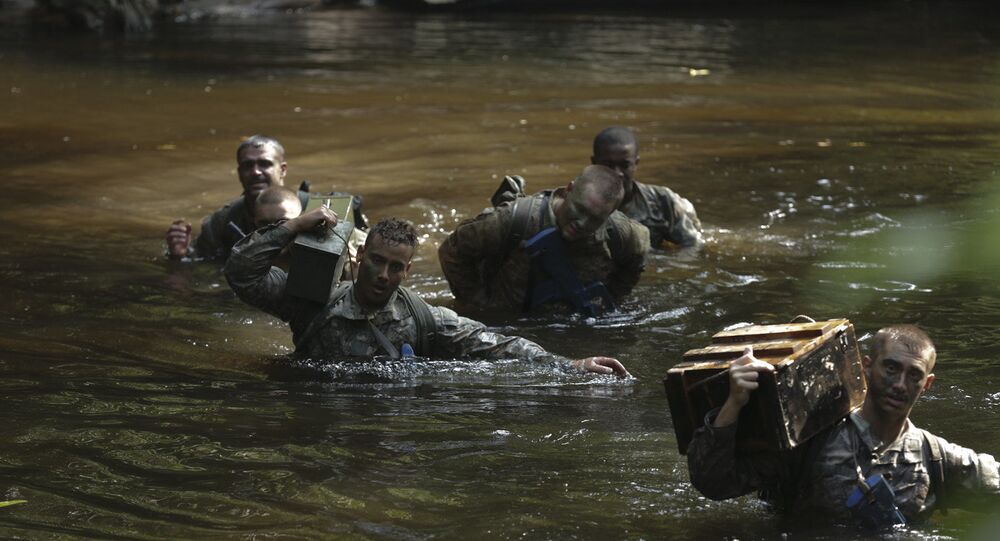 In remarks on Wednesday, US Defense Secretary Mark Esper told reporters the Pentagon needed US troops presently deployed in Africa to be moved to other theaters in order to compete with Russia and China, which he called “mission number one.”

“How do we support competition” with Russia and China, Esper asked reporters during a flight to Florida on Wednesday. “There's only a finite number of dollars, a finite number of troops, so I've got to figure out, where is the best place to put them? I've articulated in the past that I want to either return forces to the States to improve their readiness, or redeploy others to the INDOPACOM AOR [Indo-Pacific Command Area of Responsibility] to help us there specifically.  But I also know it's a global competition.”

“I said for my nomination, my aim was to implement the National Defense Strategy,” Esper told reporters. “Mission number one is compete with Russia and China. So that's one of the things that I'll be looking at for sure.”

In that 2018 document and the accompanying National Security Strategy, the Pentagon and White House laid out that “after being dismissed as a phenomenon of an earlier century, great power competition returned. China and Russia began to reassert their influence regionally and globally,” noting that “inter-state strategic competition, not terrorism, is now the primary concern in US national security.”

One reporter noted the chairmen of two powerful congressional committees, the House and Senate Armed Services Committees, have both supported strengthening troop deployments to US Africa Command (AFRICOM), especially in the wake of the October 2017 Tongo Tongo ambush in which four US soldiers and four Nigerien soldiers were killed in a Daesh ambush in western Niger.

In a letter to Esper from House Armed Services Committee (HASC) chairman Adam Smith (D-WA) obtained by Defense News, the lawmaker warned Esper to “carefully consider the adverse implications of reducing our force posture in Africa,” cautioning that “the threat of violent extremism and terrorism persists.”

“A decrease in our investment now may result in the need for the United States to reinvest at many more times the cost down the road,” said the January 16 letter, which was signed by other leading HASC members.

© AP Photo / Carley Petesch
In this photo taken Monday, April 16, 2018, a U.S. and Niger flag are raised side by side at the base camp for air forces and other personnel supporting the construction of Niger Air Base 201 in Agadez, Niger.

By contrast, the lawmakers warned the redeployment might have the opposite effect Esper intended.

“A withdrawal from the continent would also certainly embolden both Russia and China,” they argued. “The retention of forces within the AFRICOM area of responsibility serves as a check against the growing presence of near-peer competitors like China and Russia who continue to expand their influence across the continent.”

Earlier this month, between 50 and 100 US troops were sent to Kenya following an attack by the militant group al-Shabaab, which has close links to al-Qaeda, that killed one US soldier and two Pentagon contractors.

According to the New York Times, the US has between 6,000 and 7,000 troops scattered across the continent of Africa, but the troop shifts favored by Esper and Chairman of the Joint Chiefs of Staff Gen. Mark Milley could eventually affect as many as 200,000 US service members worldwide.

In addition to withdrawals from Africa, the Pentagon has for months weighed removing thousands of US forces from Afghanistan - whether as part of a peace deal with the Taliban or otherwise. Esper said on Wednesday he was “confident we can go” down to as few as 8,600 troops in Afghanistan from the present number of between 12,000 and 13,000 “and not affect our mission.”

To compensate for these changes, the Pentagon’s 127 Echo program aims to train local forces to pick up the counterterrorism and patrolling duties presently performed by US troops. As Sputnik reported in March 2019, 127 Echo has a $100 million budget to provide "viable surrogate forces … at relatively low cost in terms of resources and especially risk to our personnel,” according to then-Maj. Gen. James Hecker, then the vice director for operations from the joint staff.

Hecker referred to 127 Echo as the “Africa optimization model” during February 2019 comments before the HASC, noting it was freeing up US troops by creating "an environment where local forces take ownership of the problem."

US Africa Command is one of the newest of the Pentagon’s 13 areas of command, having only been established in 2007. AFRICOM has never been particularly popular on the continent, which is why it is headquartered in Stuttgart, Germany: at the urging of former Libyan President Muammar Gaddafi, every single African country approached by Washington to potentially hosted AFRICOM rejected the offer, with Libya sometimes offering them twice what the Americans were willing to pay if they would reject the US offer.

Pentagon Mulling Relocation of US Troops From Africa to Pacific