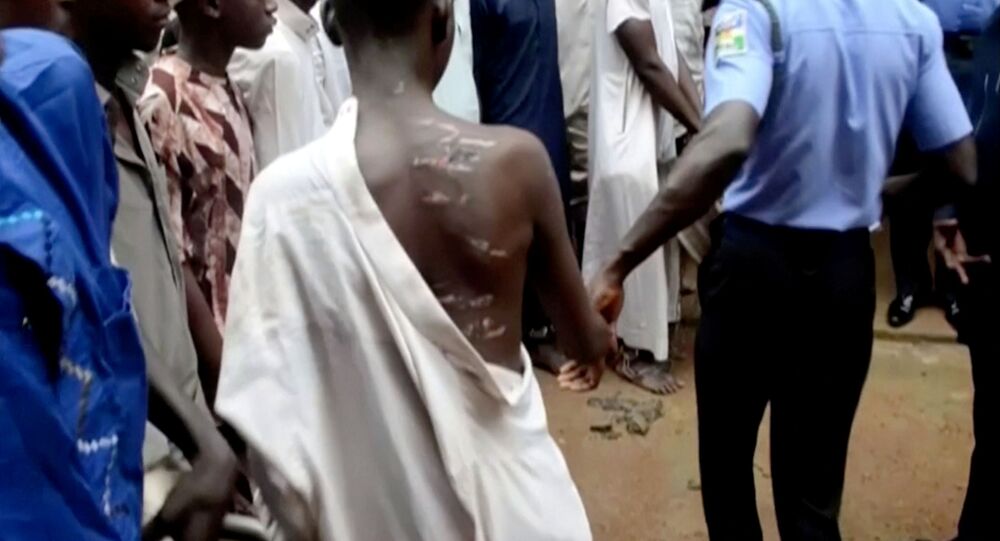 Over 300 beaten, starved and shackled men and boys have been freed from a “house of torture,” that was disguised as an Islamic school building in the northern Nigerian city of Kaduna.

The schoolhouse once known as the Imam Ahmad Bun Hambal Centre for Islamic studies has been exposed as a lair for sexual slavery and torture following a Thursday raid, according to Nigerian police officials and those rescued.

In addition to being found starving and with chained legs to discourage escape attempts, the captives, some as young as five years old, had visible welts, scars and other markings that appeared to have been inflicted by a whip or lashings from a similar weapon.

"This is supposed to be an Islamic center, but trying to run away from here attracts severe punishment; they tie people and hang them to the ceiling for that," Bello Hamza, a 42-year-old victim, told Nigerian newspaper The Punch. He alleged that he spent a period of three months with "chains on my legs."

Ali Janga, commissioner of police in the state of Kaduna, told the BBC that officers descended on the building on Thursday following a tip that referred to the building as a “house of torture.”

A total of eight individuals were arrested, seven of whom were identified as “teachers” at the school, BBC reported.

In the country of Nigeria, Islam and Christianity are nearly equal in terms of followers. Reuters notes that Muslim children who attend schools in the northern region are generally left to board there due to their parents’ financial situations.

“They said my lifestyle has changed - I’ve become a Christian, I’ve left the Islamic way of life,” a victim named Hassan Yusuf said, referencing those who sent him to the center initially, Reuters reported.

Students at the Imam Ahmad Bun Hambal Centre were left there by parents who believed their children were getting an Islamic education and rehabilitation.

“This place is neither a rehab or an Islamic school because you can see it for yourselves,” Janga told reporters, as reported by Reuters. “The children gathered here are from all over the country ... some of them were even chained. They were used, dehumanized, you can see it yourself.”

© REUTERS / Stringer
A boy who has injuries on his back is led away after police raided a house freeing men and boys in Kaduna, Nigeria.

The Nigerian police said the children come from various areas of the country and also from the neighboring countries of Ghana, Mali and Burkina Faso. Though it's unknown exactly how long this operation had been going on, the children are now safe and receiving food and other necessary attention.

Islamic schools in Nigeria, also known as almajiri, are no strangers to being called out for their treatment of students. A 2008 BBC article presented the story of a 14-year-old boy who said that he was instructed by his teacher (or mallam) to go to the streets and beg for money every day.

"It is compulsory for us to go and beg. If we stayed at the mallam's house he's not going to provide us with food - we have no option but to go out and beg," the student, who had then been with the school for 10 years, told the UK-based outlet.

Schools have also been targets of kidnapping or terrorist recruitment, such as when hundreds of schoolgirls were abducted from a Chibok boarding school in April 2014 by the extremist group Boko Haram. Though over 100 girls have since returned, the fate of those still missing remains a mystery.

Nigerian President Muhammadu Buhari, a Muslim himself, has been critical of the almajiri education system in his country and announced on June 21, via senior special assistant Malam Garba Shehu, that while he intends on putting an end to the schools’ questionable practices, he will do so by “due process and consultation with relevant authorities.”

”Indeed, the federal government wants a situation where every child of primary school age is in school rather than begging on the streets during school hours,” the assistant announced on behalf of Buhari. ”At the same time, we don’t want to create panic or a backlash.”