The head of the Sudanese Transitional Military Council (TMC), Abdel Fattah Abdelrahman Burhan, in a televised address, after deadly action against protesters in Khartoum on Monday, has announced that a caretaker government will be formed to rule the country until general elections.

Earlier on Tuesday, Burhan announced that general elections would be held in the country within nine months. He also added that the TMC terminated talks with the main opposition movement.

The United States, Britain, and Norway denounced on Tuesday the proposed  TMC plan, instead calling for an "orderly transition" to civilian rule, AFP reported.

"The people of Sudan deserve an orderly transition, led by civilians, that can establish the conditions for free and fair elections, rather than having rushed elections imposed by the TMC's (Transitional Military Council's) security forces", the three countries said in a joint statement, cited by AFP.

The forces of the TMC initiated a crackdown on sit-in protestors in the capital of Khartoum, by firing at the demonstrators. According to the opposition Central Committee of Sudan Doctors, over 35 people were killed in the clashes, while hundreds more were wounded. 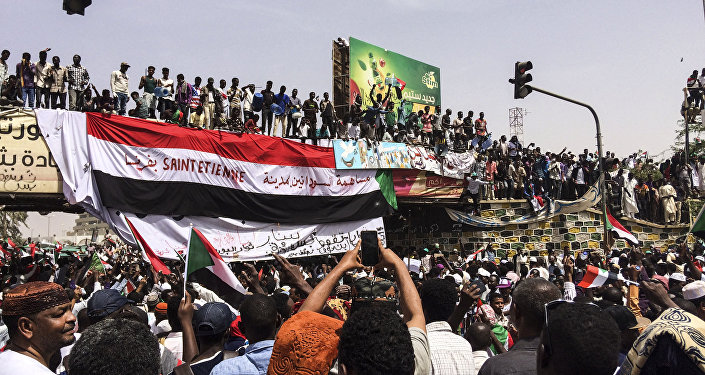 © AP Photo / Anonymous
Sudan's Transitional Military Council Calls For Elections, Announces Formation of Caretaker Govt
On Tuesday, the opposition announced it had ceased negotiations with the TMC and started a civil disobedience action, accusing the military junta of dispersing peaceful demonstrators. The opposition called on the Sudanese people to take to the streets to urge the military to give up power.

The TMC has said their operation was not aimed against peaceful protesters but rather was meant to target criminals in a local problem district, and expressed hope that negotiations with the opposition would continue.

Sudan experienced a military coup on 11 April following months of mass demonstrations. Then-President Omar Bashir was subsequently overthrown and detained after almost 30 years in power. The military then took over and pledged to organize a new presidential election within two years. Protesters have meanwhile remained in the streets demanding that the military yield power to a civilian authority.