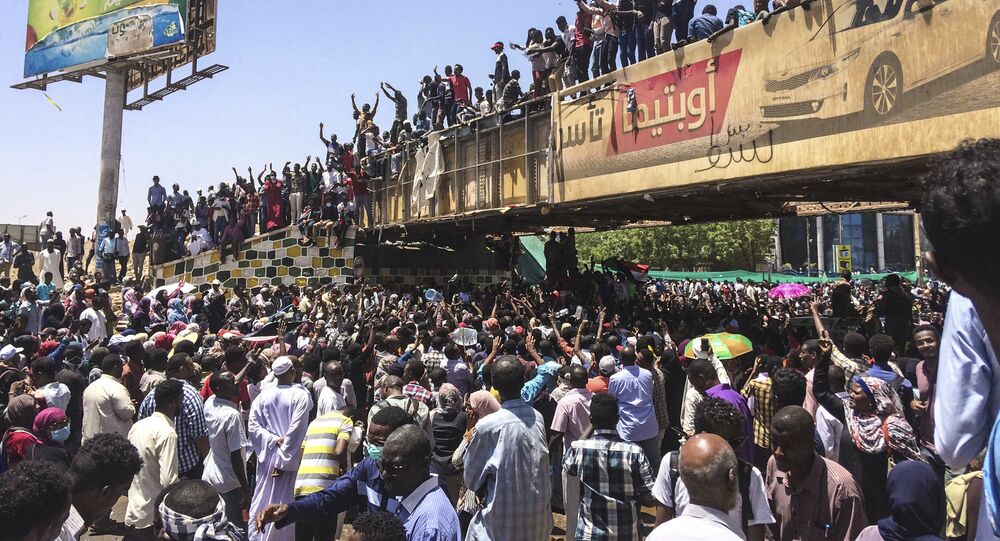 MOSCOW (Sputnik) - The United Arab Emirates (UAE) supports and is ready to assist Sudan in matters that pertain to the country's stability and security as well as its peaceful political transition to a new government, local media reported, citing UAE Crown Prince of Abu Dhabi Mohammed bin Zayed Al Nahyan.

According to the UAE WAM news outlet, Al Nahyan met with the TMC head on Sunday and affirmed his country's commitment to stand with Sudan in its efforts to realize national reconciliation.

Al Nahyan recommended that Sudan focus on dialogue as an effective measure to secure a peaceful political transition and unity for the Sudanese people.

© REUTERS / Mohamed Nureldin Abdallah
Police Officers Beat Sputnik Correspondent in Sudan, Break His Equipment
Sudan has been experiencing months of anti-government protests, which culminated in a military coup on 11 April. The TMC came to power and pledged to hold a new election within two years. Then-President Omar Bashir, who had been in power for 30 years, was overthrown and then imprisoned.

However, the protests have continued with the demonstrators demanding that the military hand power to a new civilian government. On 15 May, the TMC and the opposition reached an agreement on a three-year transitional period in the country.

On Friday, the opposition Forces for the Declaration of Freedom and Change announced that further talks on the makeup of a future sovereign council for governing the country "were not suspended but stopped".

The opposition also said that it wanted to establish a parliamentary republic in the country with expanded powers of the government and parliament for a transitional period.