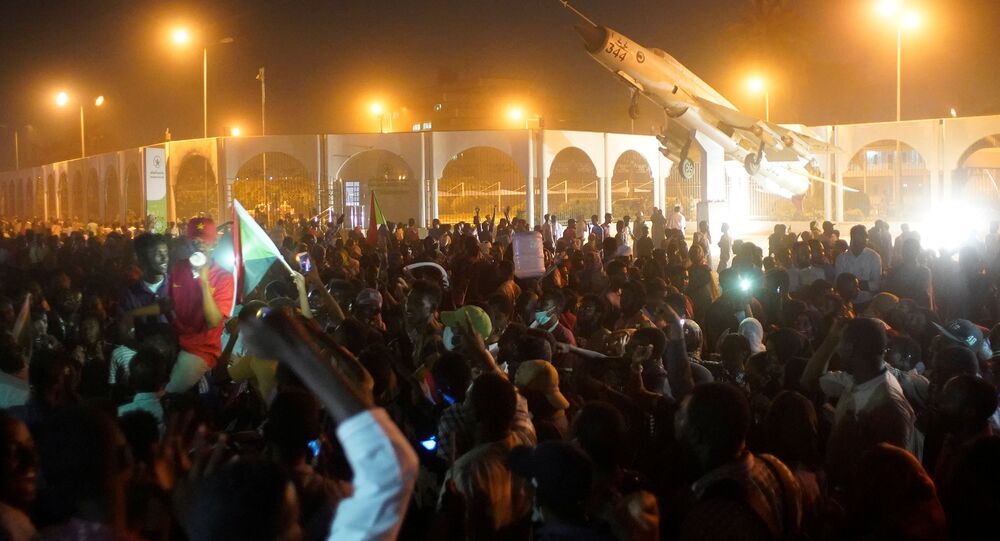 Earlier on Thursday, Sudanese Defence Minister Awad Mohamed Ahmed Ibn Auf said that President Omar Bashir, 75, had been detained. The defense minister announced that a military council has been established that will rule the country for two years.

Sudan has seen months of protests that first erupted in the country in December. The rallies were initially caused by a rise in prices for bread and other consumer goods that greatly increased the vulnerability of Sudanese citizens. The protests then took on a new dimension as Sudanese citizens started calling for the resignation of Bashir, who has been in power for nearly 30 years.

However, on Thursday the opposition Sudanese Communist Party slammed Ibn Auf's statement on the changes in the country's government, labeling them as a military coup and calling on the people to continue rallying until their demands are met.

© REUTERS / Stringer
Sudan's Defence Chief Announces Creation of Military Council to Rule for 2 Years
"This statement amounts to a state coup … We stand against military coups, and we demand those who led the coup to transfer power to the [opposition] forces of the [Alliance for] Freedom and Change. We call on the people to continue rallies in all the Sudanese cities until their demands are met", the party's political bureau wrote on Facebook.

The head of the opposition Sudanese Congress Party also called on Sudanese citizens earlier in the day to continue protests and to reject any statements that did not meet their requirements.

READ MORE: Russia to Maintain Ties With Sudan Whoever Comes to Power in Khartoum — Lawmaker

The Sudanese Professionals Association, organizing rallies in the country's capital of Khartoum, said that the revolutionary forces wanted power to be handed over to a civilian transitional government. People are reportedly dissatisfied with the fact that most of the members of the military council are part of the ruling National Congress party, and they want to see new leaders.