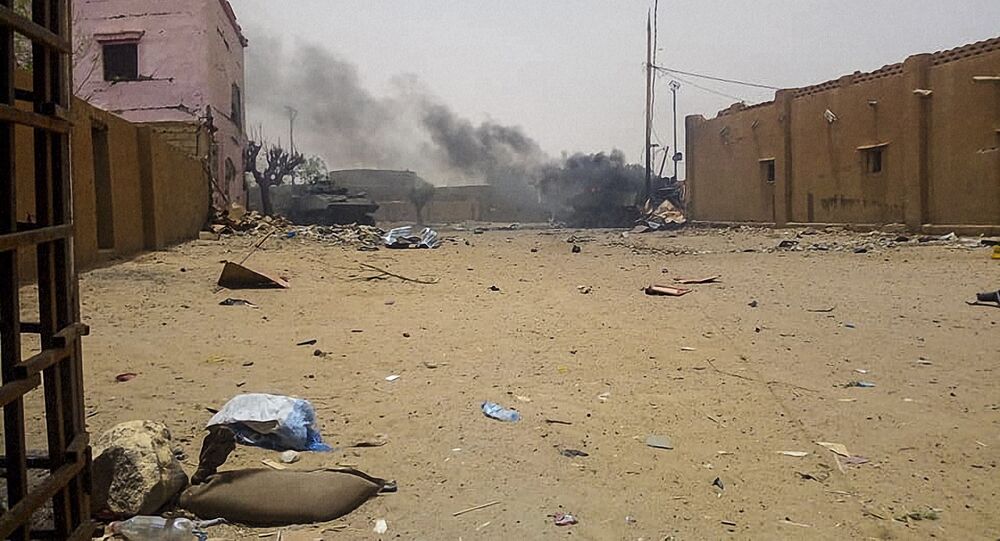 The attack took place amid the ongoing African Union summit in neighboring Mauritania, attended by French President Emmanuel Macron and African leaders, with the anti-terror fight on the agenda of the talks.

Six French servicemen were killed and two civilians injured as a result of an attack on a joint Franco-Malian patrol in the northeastern Malian city of Gao, a military source told Sputnik on Sunday.

"A bloody attack on French forces [involved in a counterterrorism operation in Africa's Sahel region] Barkhane in Gao, Mali, has resulted in the death of six French servicemen," the source said, adding that a car bomb had been detonated when an armored vehicle with French soldiers had been passing by.

Earlier in the day, the Malian Defense Ministry spokesperson stated that at least two civilians have been killed and dozens of soldiers were injured.

Previously, Reuters reported, citing local security sources, that unknown attackers detonated a car bomb, targeting a joint Franco-Malian patrol in the city of Gao. As the news agency specified, the attack led to the death of at least two people and left several more injured.

"There are several wounded among the French soldiers who were in two vehicles, completely destroyed by the explosion and they were evacuated to their base," a Malian military source said, as quoted by Reuters.

The spokesperson for the Barkhane operation in the Sahel region confirmed there was "an incident", without providing any further details.

#Mali: Heavy explosion followed by gunfire in #Gao, #Barkhane forces reported as being the target pic.twitter.com/kiZICBP1fE

The attack occurred just days after Islamists stormed a military base in central Mali, used by the G5 Sahel mission, aimed at quelling jihadist violence in West Africa's semi-arid Sahel region. The G5 mission is largely backed by Western powers, including France, which has earmarked significant funds for the fight against terrorism in the region.

In their latest report, released on Thursday, France stated that about 15 assailants had been killed during clashes which pitted its forces and Malian commandos against a group of around 20 militants on June 22.

In January 2013-July 2014, France carried out several military operations in Mali aimed at ousting jihadists from the country's north. In August 2014, they were replaced by the Barkahane operation, designed by the so-called G5 Sahel, comprising Burkina Faso, Chad, Mali, Mauritania and Niger, and launched to eradicate terrorism in the region. French forces comprise about 4,000 servicemen.