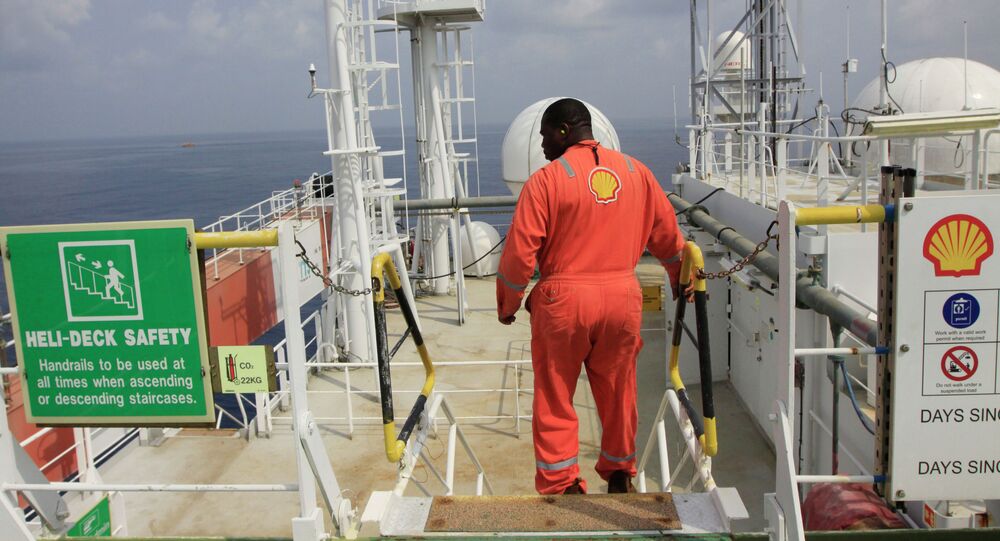 The human rights group Amnesty International is calling for a criminal investigation into the alleged complicity of oil giant Shell with a brutal campaign by the Nigerian security forces in the oil-producing Niger Delta region in the 1990s, after a local tribe sought to prevent oil extraction activities there.

The Anglo-Dutch oil giant Shell was potentially involved in a violent campaign carried out in the 1990s by the Nigerian military which silenced protest against the oil industry in oil-rich Ogoniland, according to a report published by Amnesty on Tuesday.

Over two decades ago, in response to protests by the Movement for the Survival of the Ogoni People (MOSOP), Nigerian security forces carried out a violent campaign including the unlawful killing of hundreds of Ogonis, torture, including rape, and the destruction of homes and livelihoods.

Amnesty has investigated the involvement in these events of Shell, which left Ogoniland in 1993 citing security concerns. MOSOP had demanded the company stop its activities, protesting the widespread pollution caused by oil extraction in the region.

"Despite announcing its withdrawal from Ogoniland, and knowing that the Ogoni people no longer wanted them to be there, Shell decided that its contractors should continue to lay a new pipeline through the area. Although the company was well aware that there was a high risk that the security forces would respond to community protests with excessive and possibly lethal force, Shell requested the army to hold off protestors who tried to block the work," Amnesty writes.

"On 30 April 1993, at Biara village, troops guarding Shell's contractors opened fire on protestors, injuring 11 of them. Several days later, at Nonwa, soldiers shot at protestors again, killing one man. There is no evidence that the armed forces had come under attack from the community or that their use of force was in any way proportional or justified."

Shell and the Nigerian government were "inextricably entangled," according to Brian Anderson, chairman of Shell Nigeria from 1994-1997. In the mid-1990s, the oil giant pumped roughly half Nigeria's total daily oil production, which in turn accounted for 95.7% of the country’s foreign earnings.

© AFP 2021 / ERIC PIERMONT
Shell Taken to Court Over Complicity in 1995 Execution of 9 Nigerians
In November 1995, MOSOP leader Ken Saro-Wiwa was one of nine men executed "after a blatantly unfair trial," which provoked international condemnation and sanctions against the government of General Sani Abacha.

The men had been convicted of the murder of four leaders in the Ogoni community, who were opponents of the anti-Shell rebellion.

In June this year, the widows of four of the executed men filed a lawsuit against Shell in the Netherlands, accusing the company of complicity in the executions.

"Even after the men were jailed, suffering from mistreatment and facing an unfair trial and the likelihood of execution, Shell continued to discuss ways to deal with the 'Ogoni problem' with the government rather than expressing concern over the fate of the prisoners. Such conduct cannot be seen as anything other than endorsement and encouragement of the military government's actions," Audrey Gaughran, Senior Director of Research at Amnesty International, commented in June.

In its latest report, Amnesty alleges that from mid-1993, the Nigerian security forces "incited and participated in a series of violent attacks on the Ogoni that the government sought, ultimately unsuccessfully, to blame on inter-communal tensions."

After General Abacha, who had been defense minister, seized power of Nigeria in a coup in November 1993, his government established the Rivers State Internal Security Task Force (ISTF), to "restore and maintain law and order in Ogoniland," and ensure that "those carrying out business activities…are not molested."

According to Amnesty, in 1994 MOSOP leaders, including Ken Saro-Wiwa, were detained by the ISTF, which also "launched raids on Ogoni villages. They carried out numerous extrajudicial executions and other unlawful killings, raped women and girls and detained and tortured many people."

© AP Photo / David N. Goodman
Shell Denies Knowledge of 'Murky' Oil Deal 'Robbing' Nigerian People
The NGO alleges that Shell was complicit in the human rights abuses, because its leadership knew about the measures which the government was taking to silence the protests in Ogoniland.

"Shell's knowledge went beyond widely reported events. Executives met regularly with top government officials, and discussed the government strategy for dealing with the Ogoni protests. Shell had close links with Nigeria's internal security agency. Shell's former head of security for the region gave a witness statement saying that he shared information with the agency on a daily basis."

Shell has never faced investigation in Nigeria, the Netherlands or the UK for its alleged connection to the human rights violations committed by Nigerian security forces.

Amnesty's 89-page report concludes that there are "credible grounds for investigating Shell," and calls for the company's potential criminal liability to be further investigated "with a view to prosecution for its possible involvement in crimes of murder and other unlawful killings, torture, rape, destruction of property and unlawful detention."

At Least 50 Killed in Mosque Bombing in Nigeria - Reports (PHOTO)