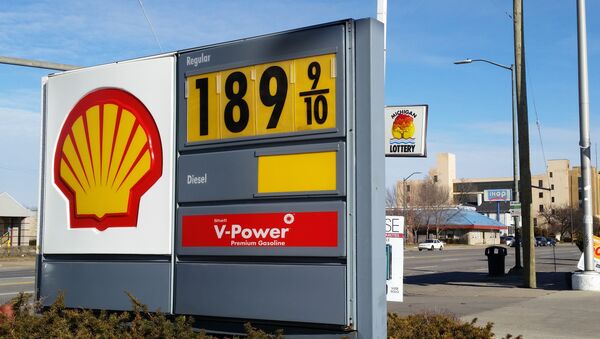 © AP Photo / David N. Goodman
Subscribe
Royal Dutch Shell has strongly denied allegations of corruption after a damning new report alleged that the Anglo-Dutch oil giant took part in a vast bribery scheme that "robbed" the Nigerian people of over a billion dollars in a "murky deal" for access to one of Africa's most valuable oil blocks.

According to internal Shell emails allegedly seen by campaign groups Finance Uncovered and Global Witness, the world's fifth biggest company paid US$1.1 billion access an oil block known as known as OPL 245, one of West Africa's biggest oil blocks, in a deal with the Nigerian government.

​However, the campaign groups allege that — instead — the money went to Malabu Oil and Gas, a front company owned by former Nigerian oil minister Dan Etete, who in 1998 had awarded his company the block when serving under the former dictator Sani Abacha.

Shell has not only deprived Nigerian people of funds but also repeatedly misled investors & public over corrupt deal https://t.co/RLCcrWMZzL pic.twitter.com/LaT8eBFzdE

According to Global Witness, despite denying the corruption allegations for six years, Shell executives allegedly knew who the money was actually going to and that they were participating in a "massive bribery scheme."

"The emails we have published today show senior executives knew the massive payment for the oil block would go to Dan Etete — a convicted money launderer and former Nigerian oil minister. He spent some of it on a private jet, armoured cars, and shotguns," the groups said.

Shell Knew!
Great to have been working with @global_witness on this important investigation. https://t.co/GVHyWUQ9lJ

"The emails also show Shell's top brass were told that money was likely to flow to some of the most powerful people in the country, including then President Goodluck Jonathan."

However, the reports have been strenuously denied by Shell, who Sputnik contacted for comment on the allegations, and who said the matter was under investigation, but that if any such alleged payments had been paid, it would have been without the knowledge of Shell employees.

"Given this matter is currently under investigation, it would be inappropriate to comment on specifics. However, based on our review of the Prosecutor of Milan's file and all of the information and facts available to Shell, we do not believe that there is a basis to prosecute Shell," a spokesperson told Sputnik.

For 6 years Shell denied any wrong-doing, saying it only paid the Nigerian govt. Now it has shifted its position: https://t.co/RLCcrWMZzL pic.twitter.com/6BAjxpfs3I

"Furthermore, we are not aware of any evidence to support a case against any former or current Shell employee. If the evidence ultimately proves that improper payments were made by Malabu or others to then current government officials in exchange for improper conduct relating to the 2011 settlement of the long-standing legal disputes, it is Shell's position that none of those payments were made with its knowledge, authorization or on its behalf," the company said.

The campaign groups say the payment in questions was equivalent to 80 percent of Nigeria's proposed 2015 health budget, but claim this money did not benefit the Nigerian people. They also claim that Shell's senior executives knew where the money was really going — a matter the oil giant resolutely refutes.

"We are taking this matter seriously and are fully co-operating with the relevant authorities. This includes when appropriate having shared the key findings of an investigation led by Debevoise & Plimpton LLP, an independent international law firm. We have also accurately reported on the OPL 245 settlement in our annual reports," the company said in a statement to Sputnik.

"Shell attaches the greatest importance to business integrity. It's one of our core values and is a central tenet of the Business Principles that govern the way we do business."