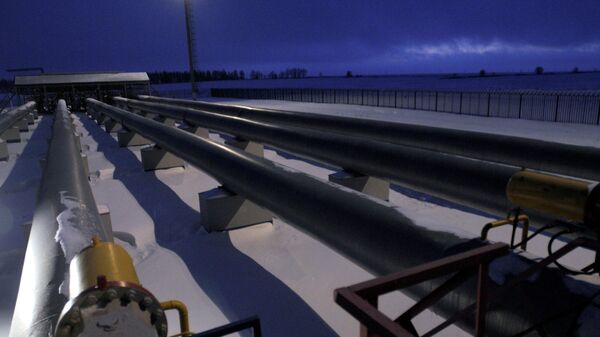 Russia launched a special military operation in Ukraine in February as attacks by Kiev's troops against the Donetsk and Lugansk People’s Republics (DPR and LPR) intensified. The Russian government said the operation's goal was to demilitarise and de-Nazify Ukraine and it is solely targeting military infrastructure.
Russian armed forces and Donbass militias are advancing with the special operation in Ukraine.
Mariupol, a coastal city in the breakaway DPR with a population of 450,000, came under the control of Russian forces in April, with the remainder of Azov militants holed up in a local steel plant Azovstal.
More than a million people have been evacuated from Ukraine and Donbass to Russia since the beginning of the special operation.
Follow Sputnik's live feed and Telegram channels to get the latest updates:
Sputnik News US — https://t.me/sputniknewsus
Sputnik News India — https://t.me/sputniknewsindia
New firstOld first
01:56 GMT 12.05.2022
Kherson Region Not to Deviate From Path of Integration Into Russia - Authorities
The Kherson Region will not deviate from the path of integration into Russia, returning under the control of Ukraine is ruled out, Kirill Stremousov, deputy head of the regional military-civilian administration, told Sputnik.

"The Kherson Region has set a course for integration into the Russian Federation and will not deviate from the chosen path. We have no other way. It is difficult to say how long the transition period will take, but by the end of the year we will be ready not only at the level of public opinion, but also legislation, for smooth transition to the status of a constituent entity of the Russian Federation," Stremousov said.

"The Kherson Region will never again be a colony of Western partners who have brought Ukraine to complete degradation," he said.
01:01 GMT 12.05.2022

The House of Representatives moved the legislation forward on Wednesday afternoon with a 362-56 vote. The measure requires US representatives to international financial institutions to advocate for the immediate suspension of all debt service payments owed by Ukraine and to provide them with concessional financial assistance.

The bill also calls on the Treasury Department to immediately pursue debt payment relief for Ukraine from other governments and commercial creditor groups through bilateral and multilateral frameworks.
21:35 GMT 11.05.2022

Antonov: Common Sense Should Prevail to End Dangerous Game of 'Canceling Russia'
18:26 GMT 11.05.2022
One Person Killed, 3 More Injured as a Result of Ukrainian Shelling of Village in Russia's Belgorod Region, Governor Says
17:46 GMT 11.05.2022
Launch of Russian Iskander Missiles - Video
16:45 GMT 11.05.2022
Young Woman Shares Her Joy After Seeing DPR Residents Freely Wearing St. George Ribbons on Victory Day - Video
16:19 GMT 11.05.2022
Mariupol Resident Says What She Thinks About Ukrainian Nationalists - Video
16:07 GMT 11.05.2022
Russia Does Not Want to Take on NATO Alliance, US Defence Secretary Says
Russian President Vladimir Putin’s calculus does not include attacking NATO but any attack on a member of the military alliance would be a “game changer,” US Defenсe Secretary Lloyd Austin said in prepared testimony to the US House Appropriations Committee on Wednesday.

“If Russia decides to attack any nation, that's a NATO member, then that's a game changer. Then, you know, with respect to the Article 5 commitments, certainly, NATO would most likely respond as a coalition in some shape, form or fashion,” Austin said. “But as you look at Putin’s calculus, my view … is that Russia doesn't want to take on the NATO alliance.”
15:51 GMT 11.05.2022
Austin: US Emphasizes to Ukrainians Importance of Weapons Not Falling in Wrong Hands
US Defence Secretary Lloyd Austin said on Wednesday that he met with Ukrainian representatives and underscored the point that the country's authorities must ensure the weapons that are supplied to them do not fall into the wrong hands..

"I emphasized the importance of accountability… and how important it is to make sure that they are tracking, you know, the disposition of our sensitive equipment that's being deployed," Austin said.

The Defence Secretary noted that accountability is an important issue to all, given that "we don't have people on the ground right now," which makes things "a bit difficult."

Austin also said he discussed this issue with Ukraine's Defence Minister Alexey Reznikov in Kiev as well as with President Volodymyr Zelensky and noted they assured him they were focused on tracking and safeguarding the weapons.
15:48 GMT 11.05.2022
US Embassy in Moscow Says US Committed to Maintaining Communication Channels With Russia
The US embassy in Moscow on Wednesday declined to answer questions from RIA Novosti on US Ambassador John Sullivan's visit to the Russian Foreign Ministry, saying only that Washington remains committed to maintaining communication channels with Moscow.

"The United States remains committed to open channels of communication with the Russian government, both to advance US interests and to reduce the risk of miscalculation between our countries," the embassy's representative told RIA Novosti.

"On May 11, Russian Deputy Foreign Minister Sergey Ryabkov met with US Ambassador to Moscow John Sullivan. A number of issues on the bilateral agenda were discussed," the statement says.

Ambassador Sullivan spent less than 20 minutes in the ministry's building, a Sputnik correspondent previously reported.
13:52 GMT 11.05.2022
Moscow Waiting for Official Apology From Poland for Incident With Russian Ambassador
Moscow is waiting for an official apology from Polish authorities for the incident with the Russian ambassador on 9 May and will decide on how to react to the incident depending on Poland's reaction, the Russian Foreign Ministry said.

On Monday, Russian Ambassador to Poland Sergey Andreev was doused with red paint while trying to lay a wreath at the cemetery of Soviet soldiers in Warsaw. Polish Foreign Minister Zbigniew Rau called the attack a "regrettable" incident.

"On May 11, Polish Ambassador to Moscow Krzysztof Krajewski was summoned to the Russian Foreign Ministry in connection with the egregious act of an attack on Russian Ambassador to Poland Sergey Andreev during the laying of a wreath at the Memorial Cemetery of Soviet Liberators in Warsaw on May 9, on the anniversary of the Victory in the Great Patriotic War," the statement says.

"Krajewski was told that the Russian side expected an official apology from the Polish leadership in connection with what happened and demanded to ensure the safety of the Russian ambassador and all employees of Russian foreign missions in Poland. The decision on further steps will be taken depending on Warsaw's reaction to our demands," the statement says.
13:39 GMT 11.05.2022
Head of Russia's Chechen Republic Says Over 200 Ukrainian Nationalists Killed and Over 10 Pieces of Military Equipment Destroyed in LPR
13:26 GMT 11.05.2022
Russian Military Investigators Discover Ukrainian Militants' Firing Position in Apartment in Mariupol - Video
13:19 GMT 11.05.2022

On Wednesday, the UK and Sweden signed an agreement on mutual security guarantees during Johnson's visit. A similar agreement is expected to be signed with Finland later in the day.
12:25 GMT 11.05.2022
EU Commission Confirms Preparing Legal Tool to Allow Seizing Frozen Russian Assets
EU Justice Commissioner Didier Reynders confirmed on Wednesday that the EU executive body was laying legal basis for seizing frozen Russian assets after media said that the EU wanted to make sanctions evasion a crime punishable by confiscation.

"We are indeed working on a European instrument which will allow us to make confiscation a possibility across the EU when attempts being made to circumvent sanctions," Reynders told a press conference after the end of EU college of commissioners meeting.

Politico reported earlier in the day that the European Commission would present a legal proposal to this effect in two weeks. National governments will reportedly be free to decide what to do with the assets or their proceeds, including whether the money should be diverted to Ukraine.
12:18 GMT 11.05.2022
Polish Ambassador Leaves Russian Foreign Ministry Without Answering Reporters' Questions
Newsfeed
0
Access to the chat has been blocked for violating the rules . You will be able to participate again through:∞. If you do not agree with the blocking, please use the feedback form
The discussion is closed. You can participate in the discussion within 24 hours after the publication of the article.
To participate in the discussion
log in or register
loader
Chats
Заголовок открываемого материала