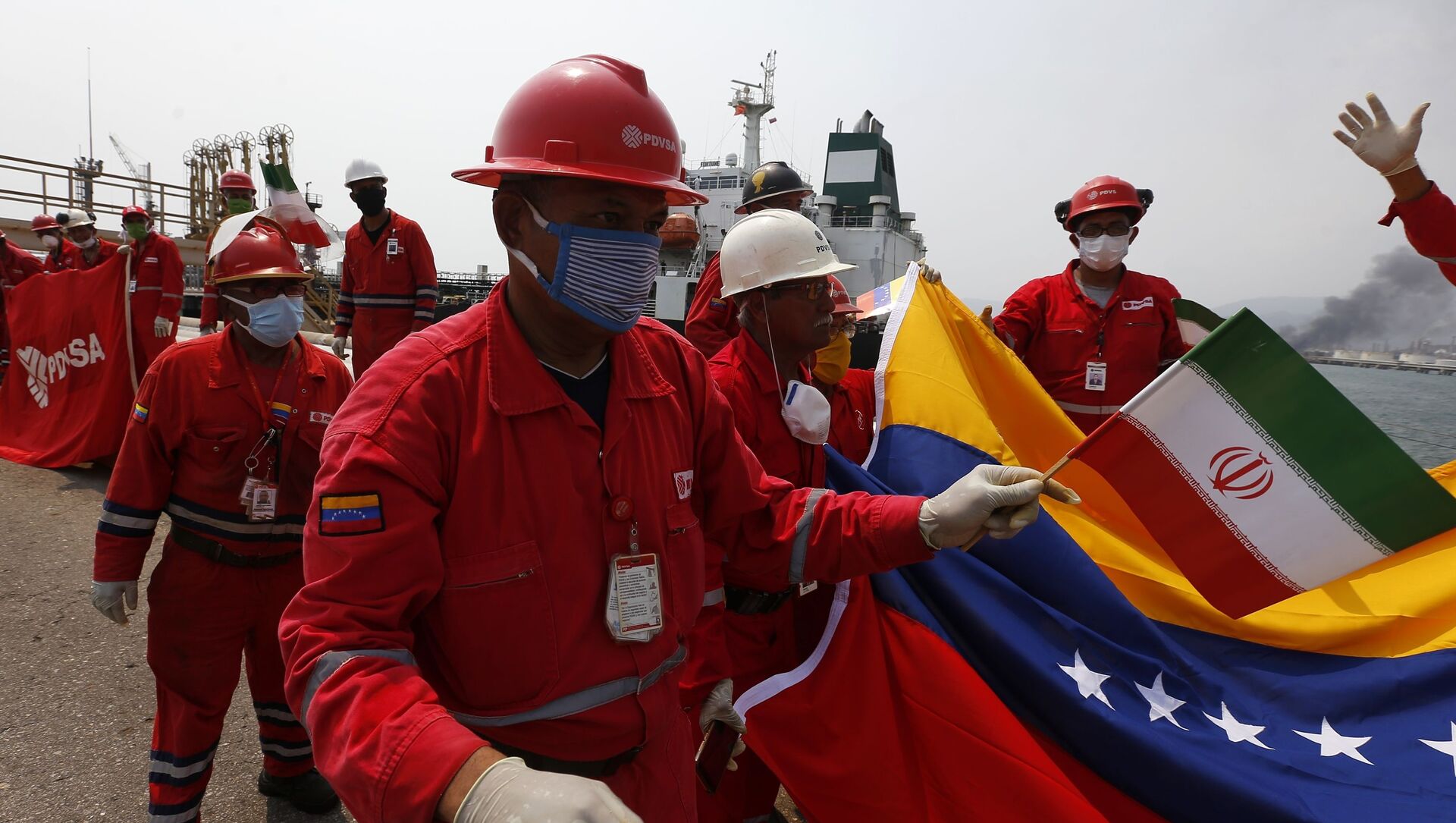 © AP Photo / Ernesto Vargas
Subscribe
Ilya Tsukanov
All materialsWrite to the author
Venezuela and Iran have enjoyed a dramatic strengthening of ties over the past two decades, notwithstanding their two very different political, ideological, and social systems. Starting in 2019, Iran has been sending fuel and other material assistance to the Latin American nation to help it overcome difficulties caused by crushing US sanctions.

Don't Touch: American Media Explains Why US Can't Act Against Iranian Warships in Atlantic
Iran responded by sending multiple ships filled with gasoline, spare parts, and food to Venezuela to ease the pressure, despite being under severe US restrictions itself. Last month, US officials began sounding the alarm about a two-ship Iranian flotilla making its way across the Atlantic toward Venezuela, claiming the ships may include Iranian arms supplies.

000000
Popular comments
your imperialisms will fall you will fall

Arbiter
24 June, 19:13 GMT2
000000
The US is a shameful tyranny. It is difficult to grasp the full extent of the US animosity towards Iran & Venezuela. The world knows that Israel is very afraid of Iran and Iran is NOT afraid of Israel. But what did Venezuela do to deserve such treatment? Besides being a Socialist country and denying the US the right to steal it's natural resources.? Oh, they refused to welcome Israel's officials and refused to move their embassy to the disputed Jerusalem land. Oh, now I get it.
Yemoot
24 June, 19:21 GMT4
000000
Newsfeed
0
New firstOld first
loader
LIVE
Заголовок открываемого материала
Access to the chat has been blocked for violating the rules . You will be able to participate again through:∞. If you do not agree with the blocking, please use the feedback form
The discussion is closed. You can participate in the discussion within 24 hours after the publication of the article.
To participate in the discussion
log in or register
loader
Chats
Заголовок открываемого материала
Worldwide
InternationalEnglishEnglishMundoEspañolSpanish
Europe
DeutschlandDeutschGermanFranceFrançaisFrenchΕλλάδαΕλληνικάGreekItaliaItalianoItalianČeská republikaČeštinaCzechPolskaPolskiPolishСрбиjаСрпскиSerbianLatvijaLatviešuLatvianLietuvaLietuviųLithuanianMoldovaMoldoveneascăMoldavianБеларусьБеларускiBelarusian
Transcaucasia
ԱրմենիաՀայերենArmenianАҧсныАҧсышәалаAbkhazХуссар ИрыстонИронауОssetianსაქართველოქართულიGeorgianAzərbaycanАzərbaycancaAzerbaijani
Middle East
Sputnik عربيArabicArabicTürkiyeTürkçeTurkishSputnik ایرانPersianPersianSputnik افغانستانDariDari
Central Asia
ҚазақстанҚазақ тіліKazakhКыргызстанКыргызчаKyrgyzOʻzbekistonЎзбекчаUzbekТоҷикистонТоҷикӣTajik
East & Southeast Asia
Việt NamTiếng ViệtVietnamese日本日本語Japanese中国中文Chinese
South America
BrasilPortuguêsPortuguese
NewsfeedBreaking
05:00 GMTNew Material to Protect Against Radiation Created in Russia
04:25 GMTMultiple Casualties Reported After Explosion Hits Bus in Damascus, Syria - Photos, Video
04:03 GMTTime's Up, Jeffrey: New Documentary Shows Epstein Claiming to Support Anti-Harassment Movement
02:49 GMTBuilding 'Metaverse': Facebook Plans to Change Its Name Next Week - Report
02:42 GMTPhoto: Texas Gov. Mocks Illegal Immigrants Trying to Cross the Border in Camouflage
02:27 GMTAlyssa Milano Arrested at Protest Outside White House for Refusing to Obey Police
02:05 GMTFBI Agents Leave House of Deripaska's Relatives in Washington, Correspondent Says
01:41 GMTEcuador President Declares State of Emergency Amid Rise in Violent Crime
00:57 GMTUS Law Enforcement Unions Decry 'Defund the Police' for Rise in Assaults on Officers - Report
00:52 GMTLabor Activists Hail ‘Striketober’ as Over 100,000 Union Workers Across US Prepare Work Stoppages
00:46 GMTUS House Committee Advances Resolution Calling for Criminal Contempt Charge Against Bannon
00:38 GMT'Ye' Surprises Yet Again: Users Mock Rapper's New Haircut
00:19 GMTBiden Admin. Not Seeking to Make States Choose Between Working With US or China, Blinken Says
YesterdayCENTCOM Chief, UAE Defense Brass Talk Keeping Pressure on Daesh in Iraq, Syria
YesterdayPhotographer Claims He Filmed Aliens Neutralizing Nuclear Missile Mid-Air - Report
YesterdayUS Senate Panel Advances Bill to Impose Sanctions Tied to South China Sea Issues
YesterdayOver Three-Fourths of US Republicans Want Trump to Run for President in 2024 - Poll
YesterdayBrazil's Senate Accuses Bolsonaro of Mass Homicide as Herd Immunity Policy Fails - Reports
YesterdayItalian Senate Bans Parliamentarians From Working Without Green Pass
YesterdayMalaysia’s Transgender Tycoon Nur Sajat Granted Asylum in Australia From Blasphemy Charges