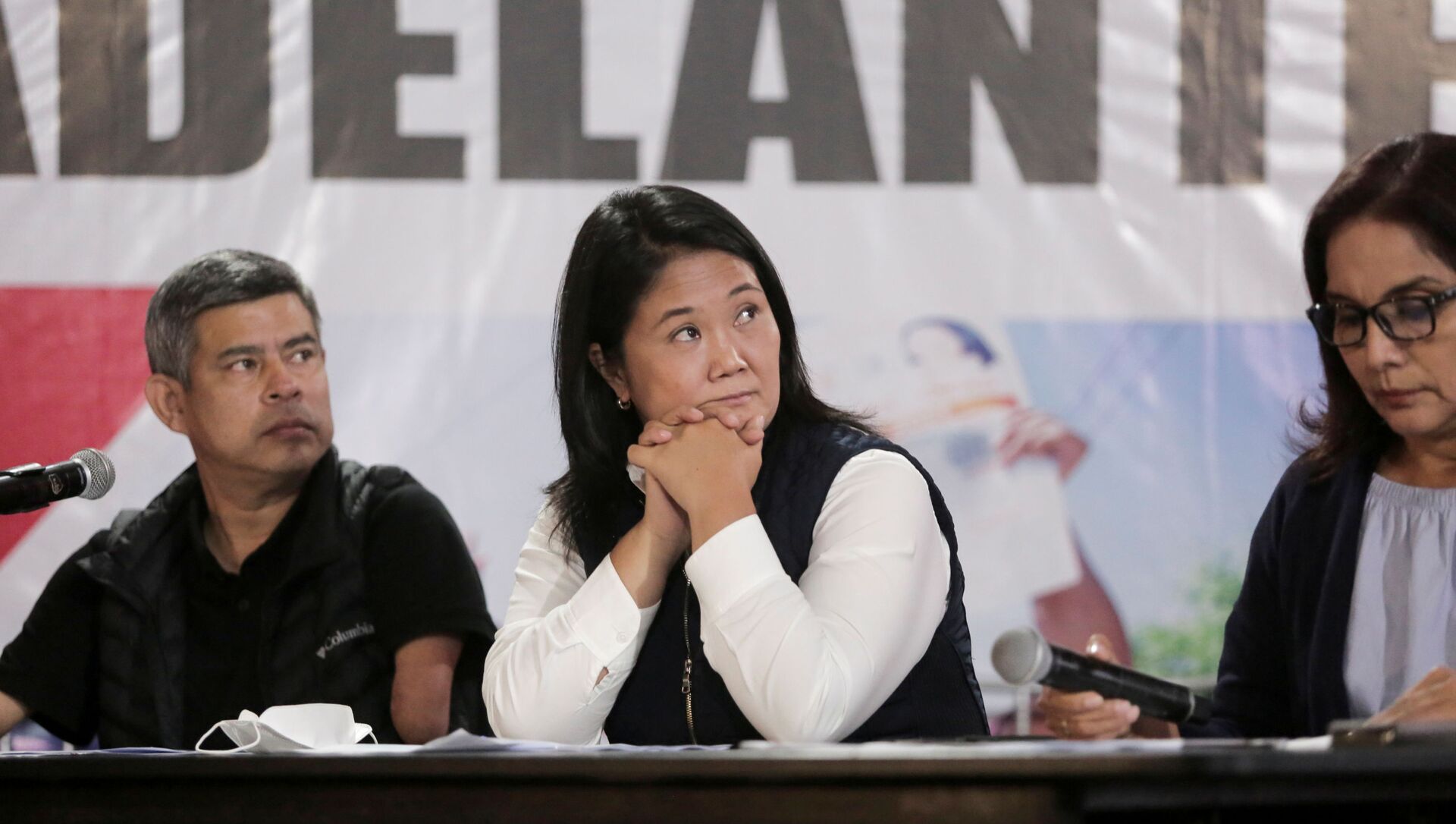 Late Wednesday evening, Fujmori appealed to Peru’s National Electoral Tribunal (JNE) to annul the results of 802 polling stations, which could lead to some 200,000 votes being discarded. At a press conference, she also said she asked for another 300,000 to be reviewed, so “half a million votes are in play.”

“There’s clear evidence of systematic intent on the part of Free Peru to subvert the popular will,” Fujimori said.

Miguel Torres, Fujimori’s legal counsel, told the Financial Times that the candidate is “not going to throw in the towel” and “will fight until the final vote.”

“Many Peruvians feel that their votes are being stolen, and we can’t permit that,” he said.

Castillo, the candidate from the left-wing Peru Libre party, is ahead of Fujimori by just 71,500 votes, according to Kawsachun News. While more than 99% of votes have been counted, the final ballots could take days to trickle in, coming from a mixture of expatriates overseas and rural inland locations.

While Fujimori had an early lead in the Sunday vote tally, by Monday, Castillo had pulled ahead and Fujimori began alleging fraud by Peru Libre. However, she has yet to present evidence of her claims, and has called on her supporters to furnish proof, while international observers like the Organization of American States and the Observer Mission of the Inter-American Union of Electoral Organizations (UNIORE) have not logged any cases of fraud, either.

​In the past, the OAS has been quick to allege inconsistencies when leftist candidates are winning ballot counts, such as in Bolivia in 2019, when their accusations - later proven to be false - helped spark a coup d’etat that forced democratically elected President Evo Morales from office.

However, Fujimori has said she will respect the conclusion reached by the JNE and National Official of Electoral Processes (ONPE) when they reach it. An ONPE official told Agence France-Presse on Thursday that the final counting could take a week.

Despite Fujimori’s moves, Castillo has continued to appeal for calm from his supporters, urging them to let the election authorities do their work.

​“Dear brothers and sisters: I thank those who continue to resist in the streets. Let us not fall into provocations of those who want to see this country in chaos,” Castillo tweeted on Wednesday evening. “Therefore, we call for peace, tranquility and unity. Let us remain firm and joyful in this final struggle that belongs to all Peruvians.”

He previously called on the ONPE to “protect the vote,” after Fujimori began leveling fraud accusations.

Fujimori is the daughter of the right-wing dictator Alberto Fujimori, who ruled Peru from 1990 until 2000, and presided over a period of civil war against the Maoist Sendero Luminoso movement and the imposition of intense neoliberal privatizations that wrecked economic havoc on millions of poor Peruvians. 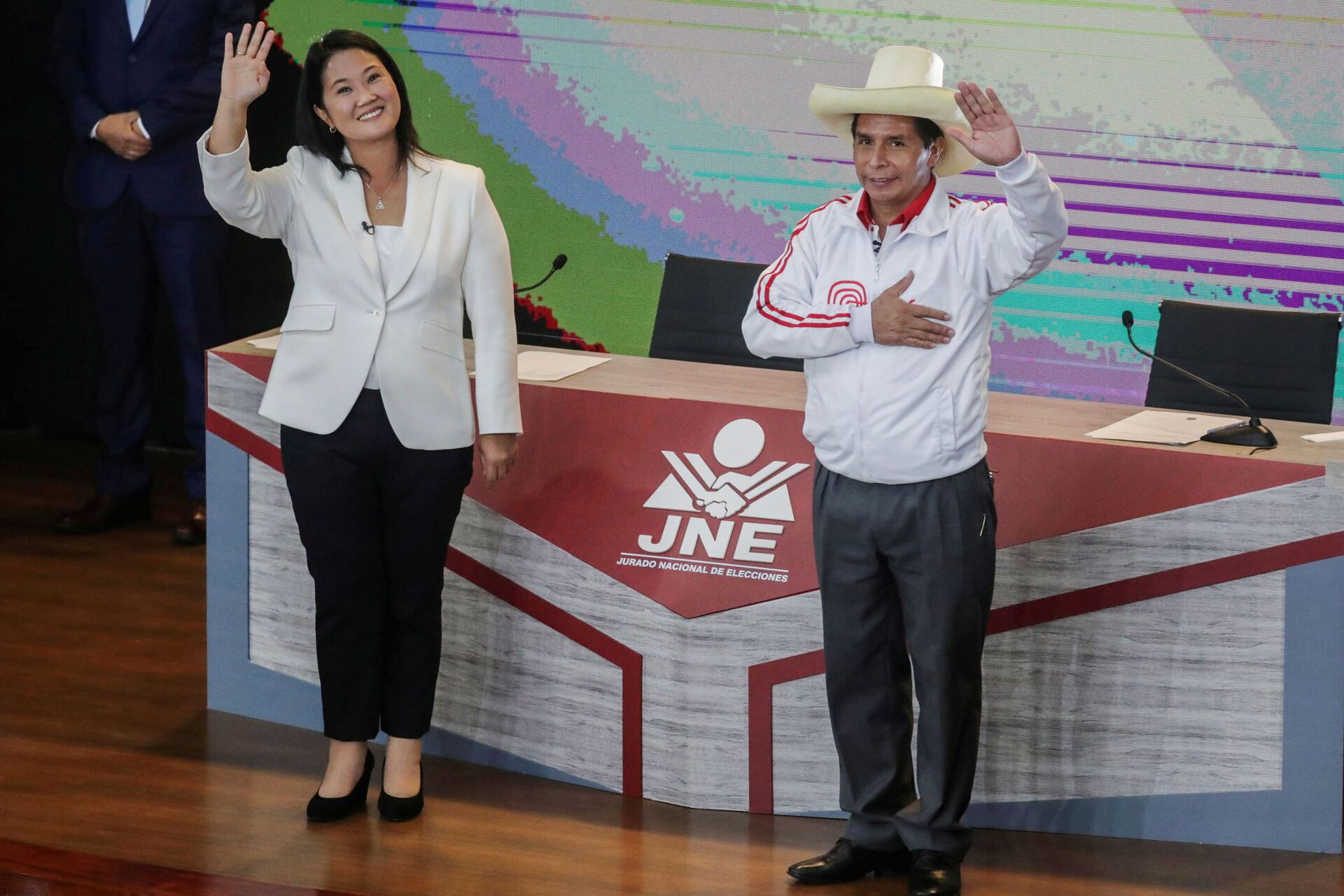 The elder Fujimori was imprisoned in 2007 and is serving a 25-year sentence on charges of corruption, violating people’s political rights, and crimes against humanity during his presidency. Keiko has said she would pardon him if she is elected, but if she isn’t, she could soon find herself in a cell alongside him: she is also accused of corrupt dealing and money laundering and has already spent 16 months in pretrial detention, which was only suspended so she could run her campaign.

Castillo couldn’t be more different from Fujimori. The son of illiterate peasants, he is an avowed socialist and a schoolteacher and union leader. He has pledged to increase access to education and other public services for the country’s impoverished rural communities and to renegotiate deals with foreign companies that have mining and other resource extraction operations in Peru so that Peruvians get a bigger cut of the profits.

This isn’t the first time Fujimori has tried to win a close election by getting votes thrown out, either: in the 2016 election, which Fujimori narrowly lost to ex-Wall Street financier Pedro Pablo Kuczynski by a similarly small margin after days of waiting for the final count, she also appealed for some 42,000 votes to be annulled due to alleged irregularities at polling stations. That effort failed, and Kuczynski ultimately became president.

This past February, she expressed regret for not calling for a recount in 2016, when the difference was “less than the number of people who enter the National Stadium.”

Ironically, Fujimori herself appealed for faith in the electoral process just a month before the election.

“That’s irresponsible, and to me it seems like a pessimistic attitude that they’ve assumed after the debate in Chota. I think that what’s important here is that it’s fundamental to respect the organizations in charge of holding the elections [and] respect the will of the people, which will be expressed June 6. So let’s keep calm.”