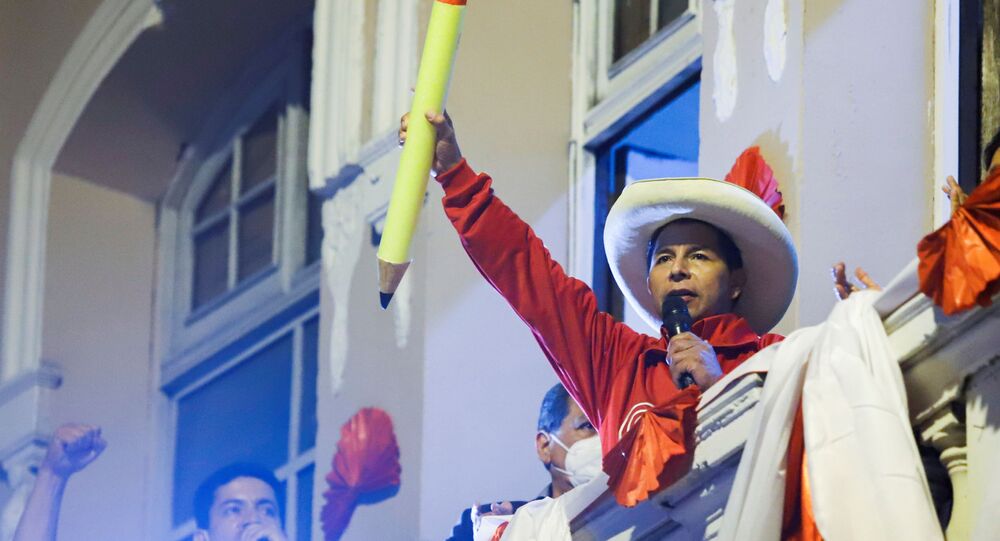 Although early polls suggested the right-wing Fuerza Popular candidate Keiko Fujimori was likely to win the presidential elections in Peru on Sunday, as the final votes are tallied, her left-wing opponent, Pedro Castillo, has pulled ahead. Fujimori has alleged voter fraud by Castillo’s party, but international observers have reported no foul play.

Speaking to the press on Monday evening as the steady stream of election results began to shift against her, Fujimori said there was “a clear intention to boycott the will of the people” by Castillo, the socialist teacher running against her.

She accused Castillo’s Perú Libre party of attempting to “distort and delay the results which reflect the popular will” by challenging ballot totals in districts she was initially declared to have won. The process is legal under Peru’s electoral rules and electoral observer missions, including the Organization of American States (OAS) delegation, which has supported such allegations when made against other leftist candidates in Latin American elections, and has not logged any cases of fraud, according to El Pais.

In response, Perú Libre rejected the accusations and called on the National Office of Electoral Processes (ONPE) to “protect the vote.”

"We must be vigilant to defend the democracy that is expressed in every vote, inside and outside our beloved Peru. We cannot rest. May this historic vigil allow the rebirth of a new country,"  Castillo said, according to TeleSUR.

Fujimori is the daughter of imprisoned former Peruvian President Alberto Fujimori and has similar neoliberal, pro-business politics, dubbed “fujimorismo.” His ten-year rule began with a hyperinflationary so-called “Fujishock” as neoliberal reforms removed economic controls and privatized large parts of the state sector. After crushing the power of the legislature and judiciary in 1992, he waged a brutal counterinsurgency war against the Maoist Sendero Luminoso movement, which had taken over much of the interior countryside. He fled the country in 2000, after failing to force Congress to let him have a third term.

Fujimori has been imprisoned since 2007 on a 25-year sentence after he was found guilty of violating people’s political rights, crimes against humanity, and corruption in a series of successive cases. Keiko Fujimori has said she would pardon her father if elected, but she has also spent much of the campaign season on a suspended pretrial detention after she was implicated in another corruption investigation.

By contrast, Castillo is a schoolteacher, union leader and the son of illiterate peasants. "Never again a poor man in a rich country,” Castillo said in a speech last month, a common refrain at his rallies. "How is it possible that in such a rich country there is so much misery, so much inequality?”

Castillo often carries a large inflatable pencil as a campaign prop and has promised to emphasize access to education and to healthcare, especially in light of the COVID-19 pandemic.

He has also said that the endemic poverty of Peru’s large indigenous population is due to “500 years of pillage, exploitation and neglect” after the Spanish conquest of the Empire of the Incas and subsequent colonization of the country.

Castillo has called for expelling the US Agency for International Development (USAID) and the closure of US military bases in Peru, as well as withdrawing from the Lima Group, the US-led group of nations dedicated to overthrowing the Bolivarian government in Venezuela, and supporting the Community of Latin American and Caribbean States (CELAC) and the Union of South American Nations (UNASUR) over the OAS, according to Popular Resistance.

Political ads have accused him of being a communist, and tried to link him to Sendero Luminoso because he was in a peasant self-defense group during the insurgency, but Castillo has clarified that he has no intent to nationalize Peruvian industries.

Ana Maria Cordova, Peru Libre’s legal representative, told Bloomberg in April that Castillo intends ”not to expropriate them, not to nationalize or anything, but so that the conditions in some way also favor populations where these industries or mining operations are involved. It is simply renegotiating conditions so that they somehow improve in favor of the population.”

On Tuesday, former Bolivian President Evo Morales spoke out about events in Peru, noting their similarities to how the US and OAS fueled a right-wing coup against him in October and November 2019 by making similar claims about supposed electoral fraud.

“The same discourse of the racist, fascist and pro-coup: it denounces ‘fraud’ without proof and attacks the democracy it claims to defend. [Donald] Trump in the US, [Carlos] Mesa in Bolivia, and Fujimori in Peru repeat the same lie and ignore the people’s vote. The result should be respected,” he said, according to Kawsachun News.

During the October 2019 vote count, incumbent candidate Morales pulled ahead late in the vote count, similar to how Castillo, the US, Mesa, and other right-wing forces in Bolivia have used it as a pretext to claim that Morales’ government had fouled the vote and accused him of making a power grab. While some academics at the time noted the pattern of voting results was possible without fraudulent counting practices, only several months later did corporate media outlets like the Washington Post admit their error, after Jeanine Añez's coup government had crushed the resistance of pro-Morales indigenous communities. Añez has since been arrested and charged with terrorism, sedition, and conspiracy after Luis Arce, a candidate from Morales' Movimiento al Socialismo (MAS), defeated her in October 2020 elections.

In Haiti, Bolivia, Brazil, & Beyond, Latin America’s Left Fights Back

Ben Norton: How Both Flavors of Neoliberalism Lost in Ecuador Election