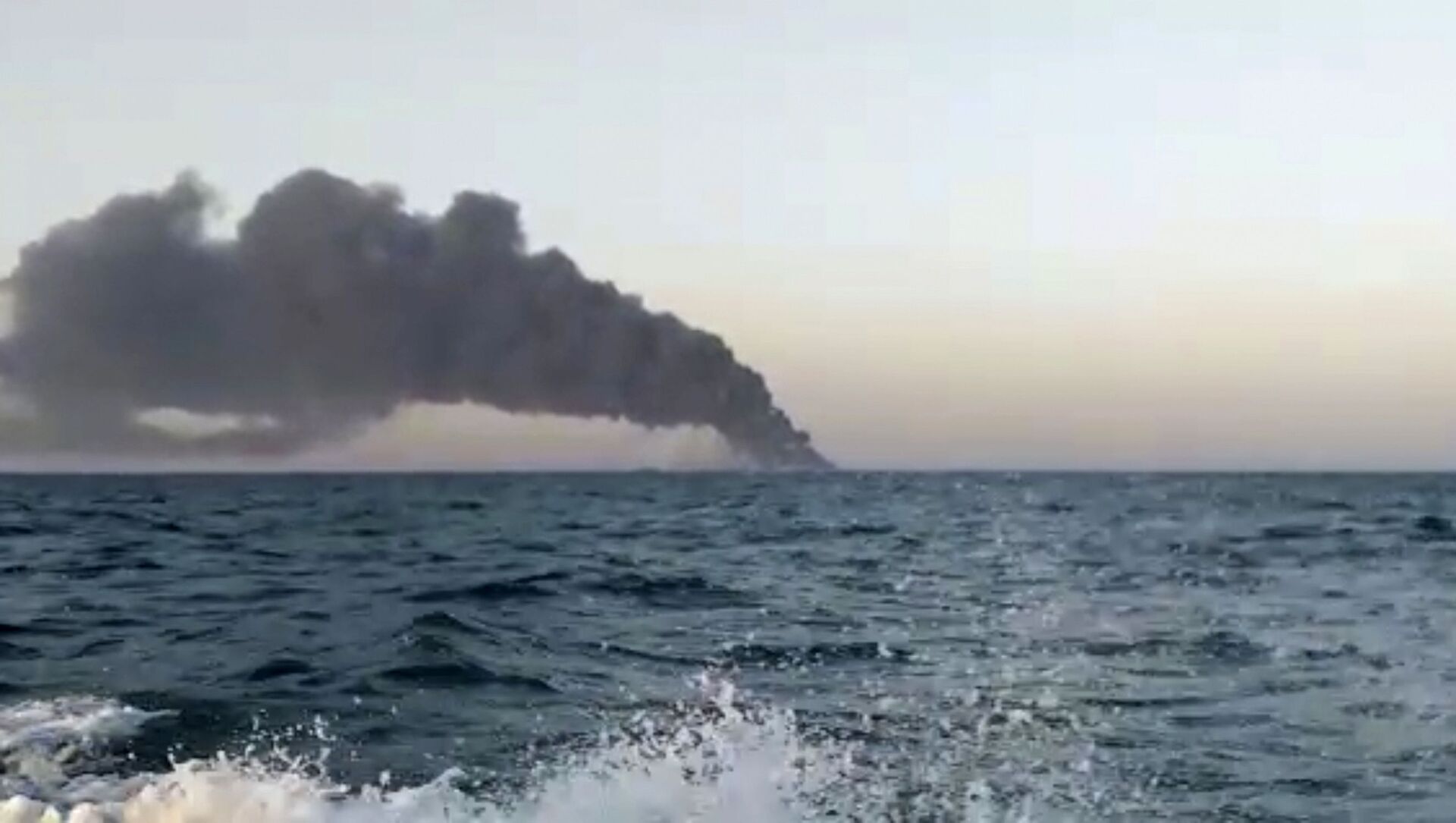 © AP Photo / Asriran.com
Subscribe
Svetlana Ekimenko
All materialsWrite to the author
Around 20 people received minor burn injuries, but no one was seriously hurt in the incident before the burning vessel was evacuated, a government spokesman told the Tasnim news agency, adding that the cause of the fire was still being investigated.

One of the Iranian Navy’s largest support vessels, the Kharg, sank on Tuesday in the Gulf of Oman.
A fire had broken out on the 650 ft. cargo ship, designed to resupply ships at sea, during a training exercise.

The blaze, believed to have been triggered by a “fault in one of its systems”, prompted a swift evacuation of the entire crew of 400 and trainees.

Iranian Navy ship '#kharg' sinks in the Gulf of Oman. The largest Iranian naval vessel could not be saved. pic.twitter.com/XpnDueMWLv

Efforts by firefighters to put out the blaze proved to be futile. The ship sank 20 hours later near the port of Jask.
According to a government spokesman cited by Tasnim news agency, some 20 people received minor burn injuries. It was added that a probe was still underway.

​The incident follows a spate of mutual recriminations between Iran and Israel over attacks on cargo ships and military vessels. The verbal allegations over sea incidents fed into the already fraught relations between the adversaries.

In April, Iran accused Israel of being behind a blast using underwater mines that damaged its military vessel MV Saviz in the Red Sea.

#Iran - #Israel : Iranian media just shared photos from inside the Saviz Iranian ship that has been attacked by Israel in the Red Sea by limpet mines. Media said an unknown helicopter flew over the ship hours before the Israeli attack. Via @m_khalili93 pic.twitter.com/7kkuGpDWMV

Earlier, an Israeli cargo vessel sailing from Tanzania to India was hit by a missile in the Arabian Sea, prompting Israeli security services to point the finger of blame at Tehran.

Reported (unconfirmed) photos from the damage caused to the #Israel|i owned MV Helios Ray in the Gulf of Oman. pic.twitter.com/71iLePn0DG

​Another Israeli-owned cargo vessel, the MV Helios Ray, was also hit by explosions while sailing off the coast of the UAE in February.

While Israel made no official accusation at the time, unsourced reports from the Israeli media outlets Haaretz and Channel 13 at the time claimed Iran knew that the vessel was owned by an Israeli businessman.

000000
Popular comments
The Iranians claim that the ship was only for personnel training because it was forty years old. The fire was an accident and no group was involved, the report confirmed.
DanE
2 June, 15:24 GMT4
000000
The jews of course - anything untowards in Iran or regarding Iranian property is with an astounding certainty the result of jews infiltrating the Iranian society. Time to clear out the skulking scums from the middle east different societies!
mandrake
2 June, 16:11 GMT4
000000
Newsfeed
0
New firstOld first
loader
LIVE
Заголовок открываемого материала
Access to the chat has been blocked for violating the rules . You will be able to participate again through:∞. If you do not agree with the blocking, please use the feedback form
The discussion is closed. You can participate in the discussion within 24 hours after the publication of the article.
To participate in the discussion
log in or register
loader
Chats
Заголовок открываемого материала
Worldwide
InternationalEnglishEnglishMundoEspañolSpanish
Europe
DeutschlandDeutschGermanFranceFrançaisFrenchΕλλάδαΕλληνικάGreekItaliaItalianoItalianČeská republikaČeštinaCzechPolskaPolskiPolishСрбиjаСрпскиSerbianLatvijaLatviešuLatvianLietuvaLietuviųLithuanianMoldovaMoldoveneascăMoldavianБеларусьБеларускiBelarusian
Transcaucasia
ԱրմենիաՀայերենArmenianАҧсныАҧсышәалаAbkhazХуссар ИрыстонИронауОssetianსაქართველოქართულიGeorgianAzərbaycanАzərbaycancaAzerbaijani
Middle East
Sputnik عربيArabicArabicTürkiyeTürkçeTurkishSputnik ایرانPersianPersianSputnik افغانستانDariDari
Central Asia
ҚазақстанҚазақ тіліKazakhКыргызстанКыргызчаKyrgyzOʻzbekistonЎзбекчаUzbekТоҷикистонТоҷикӣTajik
East & Southeast Asia
Việt NamTiếng ViệtVietnamese日本日本語Japanese俄罗斯卫星通讯社中文（简体）Chinese (simplified)俄罗斯卫星通讯社中文（繁体）Chinese (traditional)
South America
BrasilPortuguêsPortuguese
NewsfeedBreaking
23:04 GMTAustralia's Great Emu War: How a Nation Declared War on a Bird and Lost
23:00 GMTBlinken Vows to ‘Keep Normalization Marching Forward’ on One-Year Anniversary of Abraham Accords
22:39 GMTEx-Algerian President Abdelaziz Bouteflika Reportedly Dies Aged 84
21:51 GMTAct of Sabotage Results in Power Outage in Damascus, Energy Minister Says
21:35 GMTOld Friends Are Not the Best?
21:08 GMTMilley Assured Pelosi That US Military, Not Trump, Controlled the Nukes, Vice Chairman Says
21:05 GMTFed. Chief Powell Orders Sweeping Ethics Review Amid Trading Scandal at Federal Reserve
20:38 GMTBiden to Convene COVID-19 Summit on Margins of UN General Assembly
20:30 GMTFootball Legend Pele 'Rushed Back' Into Intensive Care Days After Colon Cancer Surgery
20:21 GMTRussia Possesses ‘Unbelievable Military Power’ After Transforming Forces, US General Says
20:20 GMT‘Irony of Historical Proportions’: Iran Ex-FM Zarif Muses on US Deal to Sell Australia Nuclear Subs
19:47 GMTPrince Andrew Has a Week to Challenge Court Ruling to Serve Papers Amid Procedure Disagreements
19:43 GMTFDA Panel Votes Against Offering Pfizer Booster Shots for COVID-19 to Most Americans
19:37 GMTFrance Recalls Ambassadors From US, Australia for Consultations over AUKUS Alliance
19:34 GMTUS Prosecutors Reportedly Plan to Charge Ex-Boeing Employee for Concealing Truth About 737 MAX
19:28 GMTAlt-Right Proud Boys Warn Members to Avoid 'Trap' of Washington DC Rally
19:18 GMTTrump Sends Letter to Top Georgia Officials Demanding to End 'Illegitimate' Biden's Presidency
19:18 GMTTaliban Reportedly Ditches Women's Ministry in Favour of 'Ministry of Virtue and Vice'
19:09 GMTUS Gen. McKenzie Admits Kabul Airstrike 'Was a Mistake', Killed Only Afghan Civilians
19:07 GMTPresident Trump’s Dismissal of Bill Barr’s Warnings Cost Him Presidency, Book Claims