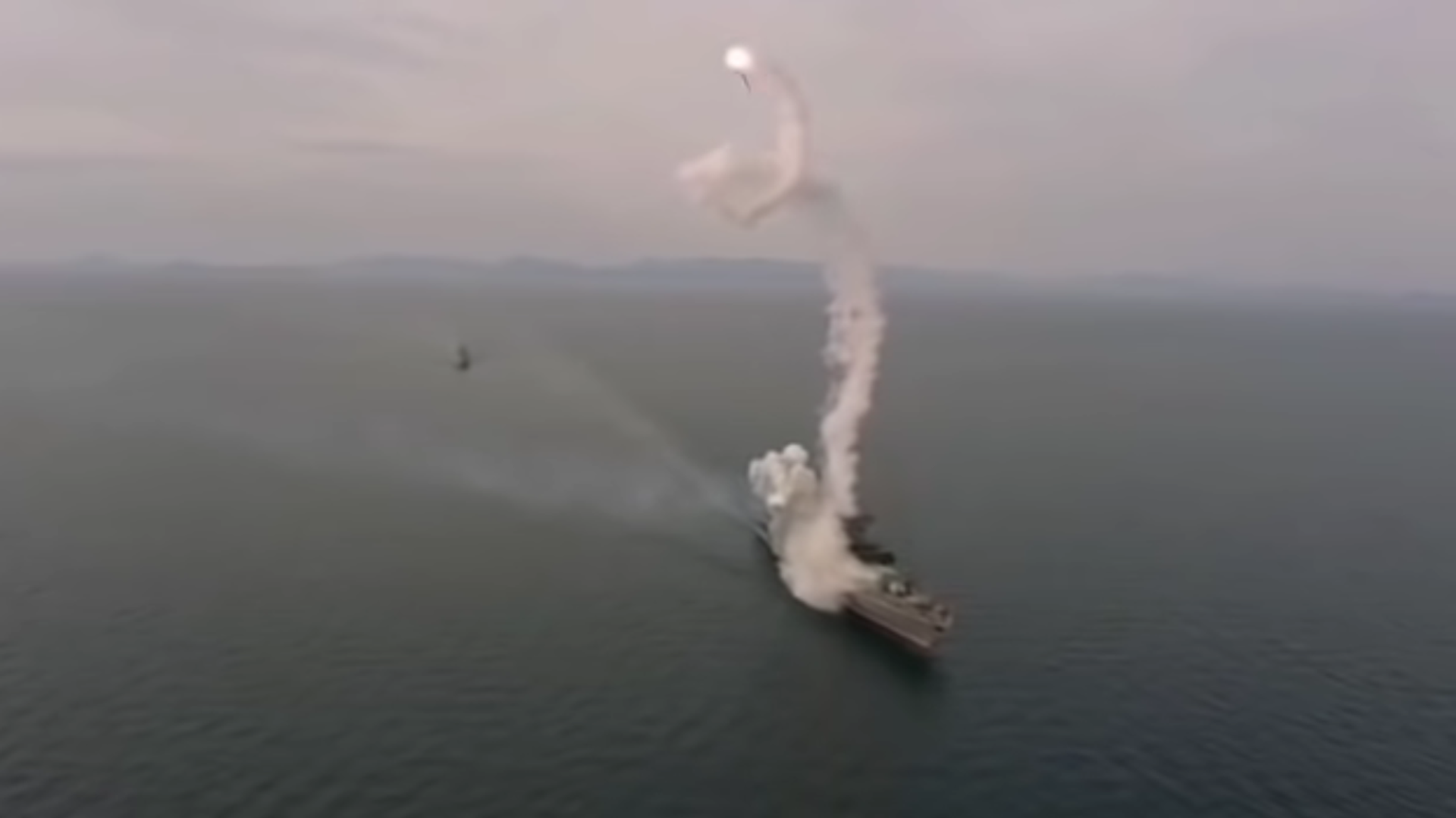 Morgan Artyukhina
All materialsWrite to the author
While Russian naval strategy has long emphasized long-range missiles as the key to balancing against US aircraft carriers, the 3M-54 Kalibr cruise missile packs an especially nasty surprise to catch enemy ship defenses off-guard: a supersonic terminal phase that triples its speed.

During a recent test of its new vertical launch tubes, Russia’s Project 1155 destroyer Marshal Shaposhnikov launched several Kalibr cruise missiles, one of which spiraled out of control just seconds after launch.

Little is known about the test, but it seems to have been part of a recent round of firings in the Sea of Japan in early April. The tests, otherwise successful, were the first time Marshal Shaposhnikov had fired missiles from the Kalibr family since finishing its refit in which vertical launch tubes were installed.

While the Ministry of Defense released one video of a successful Kalibr launch, another video leaked on social media shows what happens when something goes wrong.

Less than a second after blasting off from the Marshal Shaposhnikov, something goes wrong with the cruise missile’s engines and it begins to spin violently out of control - so violently, in fact, that the engine is ripped off the body of the missile and the two halves plunge separately into the Sea of Japan.

Even then, the rocket engine isn’t done creating chaos: its solid fuel continues to burn, spinning the engine around in the sea and churning up a huge maelstrom, occasionally emerging for a thunderous moment before plunging back again.

Thanks to its reconstruction completed last year, which converted the ship from a submarine hunter into a multirole destroyer, the Marshal Shaposhnikov can carry up to 16 of the long-range Kalibr missiles. The Kalibrs are versatile as well, capable of striking ships, submarines and land targets, the latter off which were being used in other Sea of Japan tests that were successful. A new version of the Kalibr, the Kalibr-NK, debuted in 2015 when several were fired against Syrian rebels by warships in the Caspian Sea, more than 1,100 miles away.

While a missile spiraling out of control or exploding can seem dissuading, it is an unfortunate event that sometimes occurs to many models.

In 2015, for example, an SM-2 anti-air missile the US Navy destroyer USS The Sullivans attempted to fire instead exploded right out of the launch tube, showering the warship with burning pieces of rocket. In another terrifying incident in 1989, the first time the US Navy tried to fire a Trident II ballistic missile from a submerged submarine, the jet of water surrounding the rocket got inside the engine nozzle as it ignited, sending the missile into a spiral just above the water’s surface before exploding a few seconds later.

In one Russian accident in 2009, the third stage of a Bulava submarine-launched ballistic missile suffered a bizarre failure that some experts speculated was a damaged nozzle that redirected the jet stream sideways instead of down. The rocket spiraled in the upper atmosphere for some time, creating an enigmatic spiral cloud in the skies over Norway.