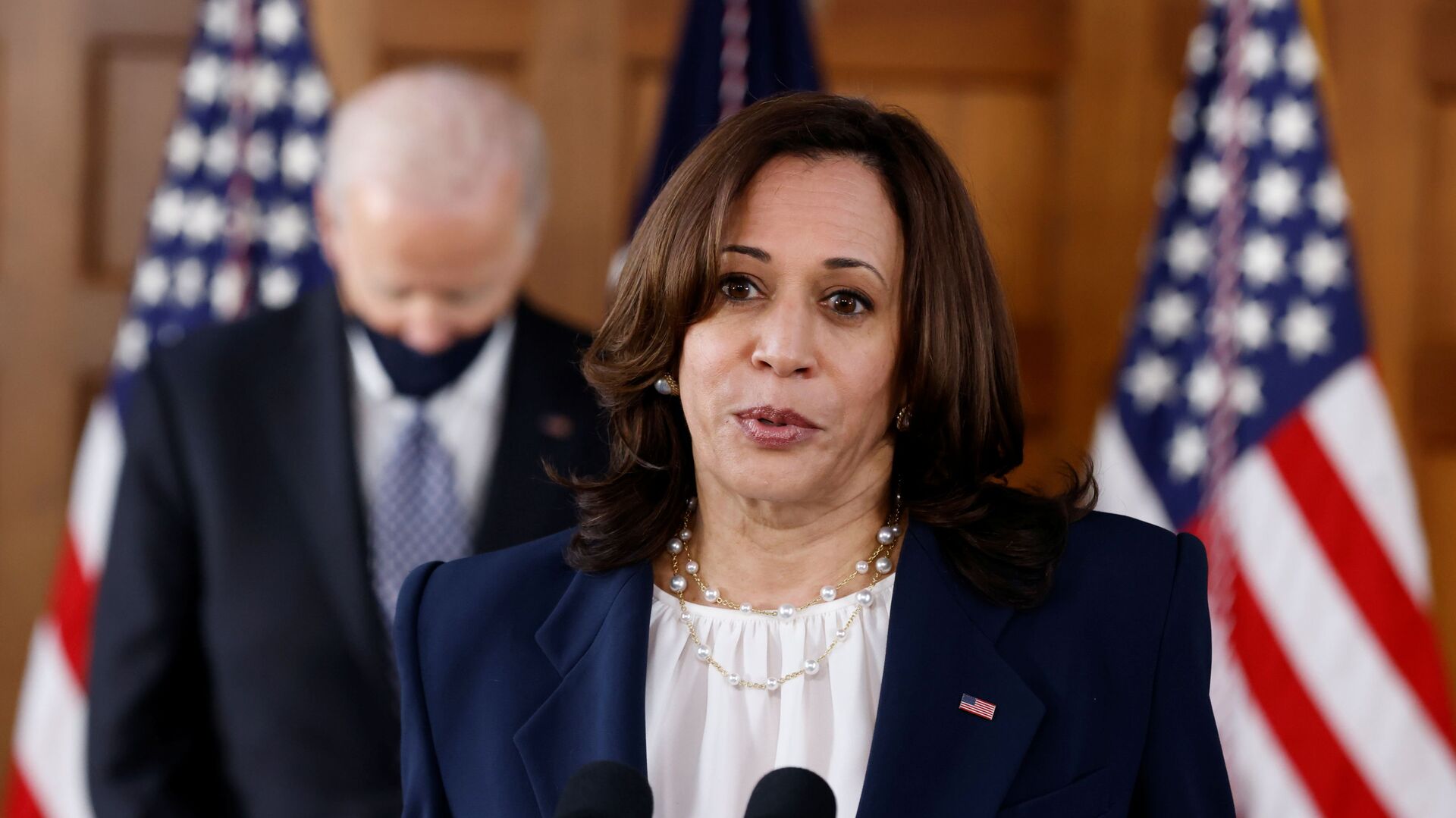 Ekaterina Blinova
All materialsWrite to the author
The Biden administration's hesitance to lend a hand to India, which has been severely hit by the second wave of COVID-19, was noticeable for all Indians, says journalist and author Suvam Pal. It is especially mind-boggling given Vice President Kamala Harris' praise for her Indian roots during the 2020 election campaign, according to the author.

On 27 April, US President Joe Biden called Indian Prime Minister Narendra Modi, pledging assistance amid India's dramatic spike in coronavirus cases. The White House had previously signalled that it would provide the South Asian nation with the raw materials needed for producing the COVID vaccines and supply medical equipment including ventilators and oxygen generation gear to the country.

However, this gesture of generosity only came after a massive outcry and mounting pressure from US lawmakers and the Indian American community. In February 2021, the US invoked the Defense Production Act to curb the export of raw materials critical for vaccine production and initially the Biden administration appeared reluctant to lift the ban despite India's repeated pleas.

"Well, as they say, it’s better late than never," says Suvam Pal, a Beijing-based Indian media professional and author. "But there has been a noticeable and significant delay before the US got into action."

Once the second wave crippled India’s health infrastructure with an acute oxygen and remdesevir shortage, many countries, including Russia, the EU, Singapore, Saudi Arabia, the UAE, Iran, and the Kingdom of Bhutan, to name a few, came to India’s rescue, Pal notes. China vowed to help New Delhi overcome the overwhelming pandemic and even Pakistan, often referred to as "India's archrival" by the press, issued statement showing solidarity with India, the author highlights.

"The US maintained a studied silence for a few days despite India’s appeal for help," Pal says. "In fact, the US silence was quite significant considering the fact that Vice President Kamala Harris maintained throughout her campaign that she was proud of her Indian roots to woo the sizable Indian diaspora."

He notes that while Kamala Harris' niece, Meena Harris was "quite quick to express her outrage against the Indian government and lend her support to the agitating farmers" in February, neither Harris nor her family nor the US president rushed to send "a single solidarity message" to India when "horrific pictures of the burning pyres in the crematoriums [were already] all over the global media" in April. 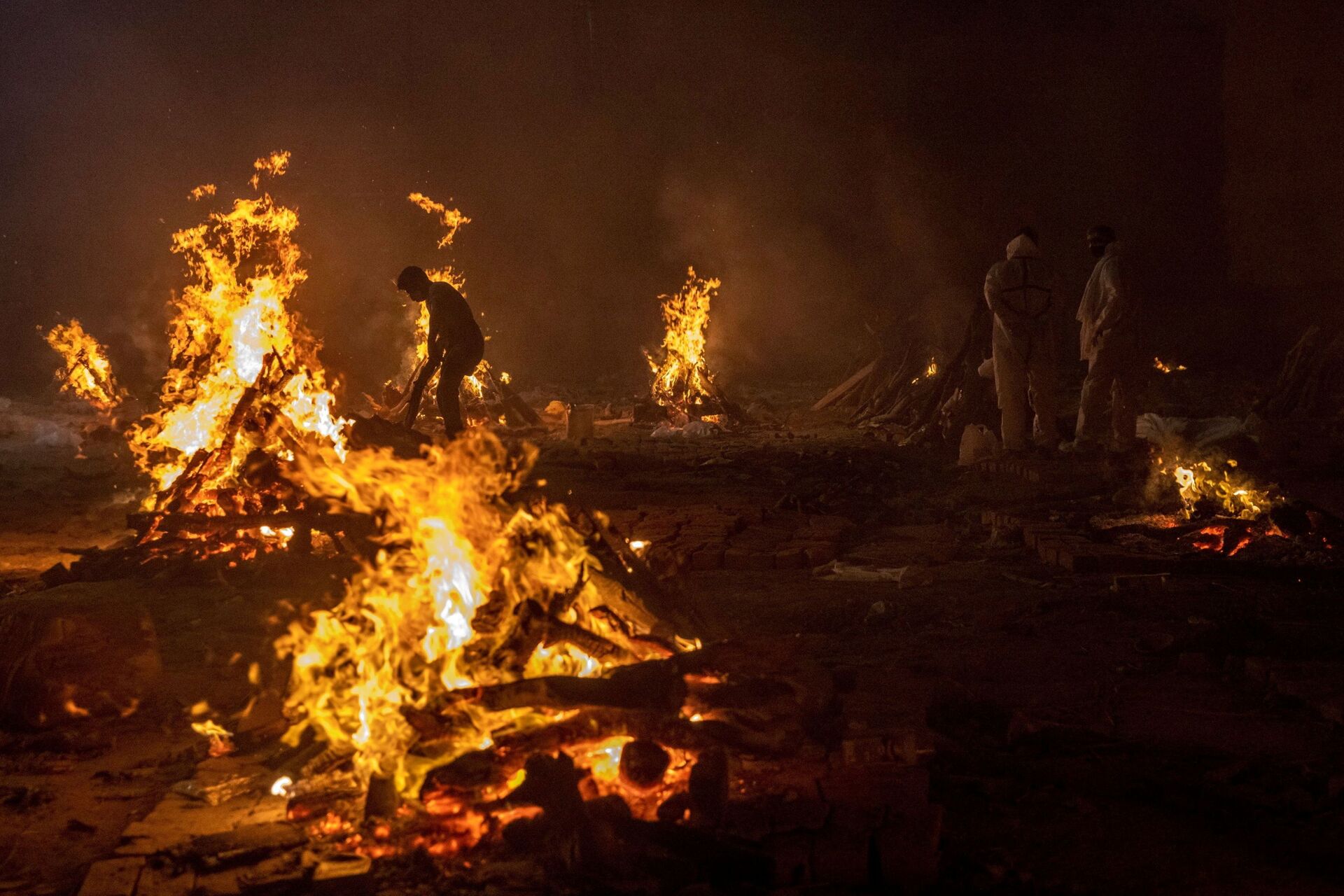 People cremate the bodies of victims of the coronavirus disease (COVID-19), at a crematorium ground in New Delhi, India, April 24, 2021
© REUTERS / DANISH SIDDIQUI

India's government, diplomats, the public, as well as Indian-American communities in the US raised their voices urging the White House to lend a hand to the country, which saw 273,810 new COVID infections nationally on 18 April. To date, India has registered over 17.9 million confirmed coronavirus cases and more than 200,000 COVID-related deaths, according to Johns Hopkins University.

"[Washington's] hesitance has surely impacted the mind of the Indian public even though there seems to be a last-minute effort by the US to salvage the situation," the author believes.

To add to the simmering controversy, US Secretary of State Antony Blinken has recently expressed concerns over channelling Washington’s COVID-related supplies to India through federal authorities, calling for involving “institutions” based in Indian states. For its part, New Delhi wants all of incoming foreign aid to be routed through Prime Minister Narendra Modi's Office (PMO), to ensure the orderly distribution of materials and medical equipment. 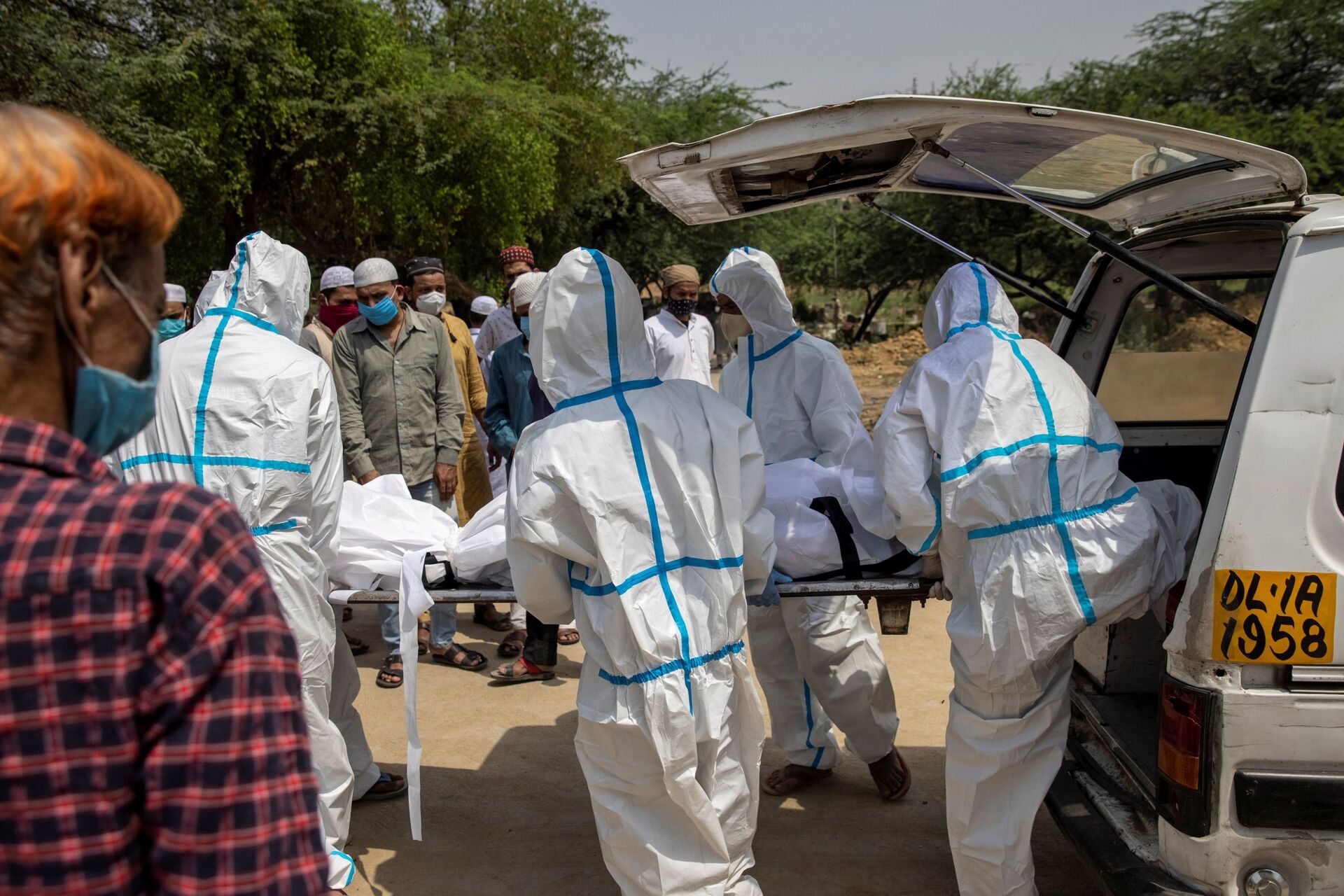 Healthcare workers and relatives carry the body of a person, who died from the coronavirus disease (COVID-19), for his burial at a graveyard in New Delhi, India, April 28, 2021.
© REUTERS / DANISH SIDDIQUI

India Remains Dependent on US Supplies

Following the Biden administration's February ban, the Indian pharma industry has found itself in dire straits, as it is dependent on US supplies for making the Covovax and Covishield vaccines.

"Biden’s decision on 21 January 2021 to ensure the availability of 'critical' materials and supplies, including the vaccine raw materials, has put the Indian vaccine manufacturers in a quandary and impacted their manufacturing capacity a lot," Pal highlights. "According to the WTO estimation a vaccine manufacturing company uses around 9,000 different material from hundreds of suppliers from various countries. But the US has got a large number of those raw material suppliers."

Although the Modi government has long advocated "atmanirbhar bharat" or self-reliant India campaign, the amount of raw materials any vaccine manufacturer needed to scale up their production "are almost impossible to source within India," the journalist underscores.

"The SII and Bharat Biotech, two of the leading manufacturers are also leaving no stone unturned to reduce the foreign dependency in their vaccine production as much as they can," Pal stresses. "But that’s still a far cry and a long haul." 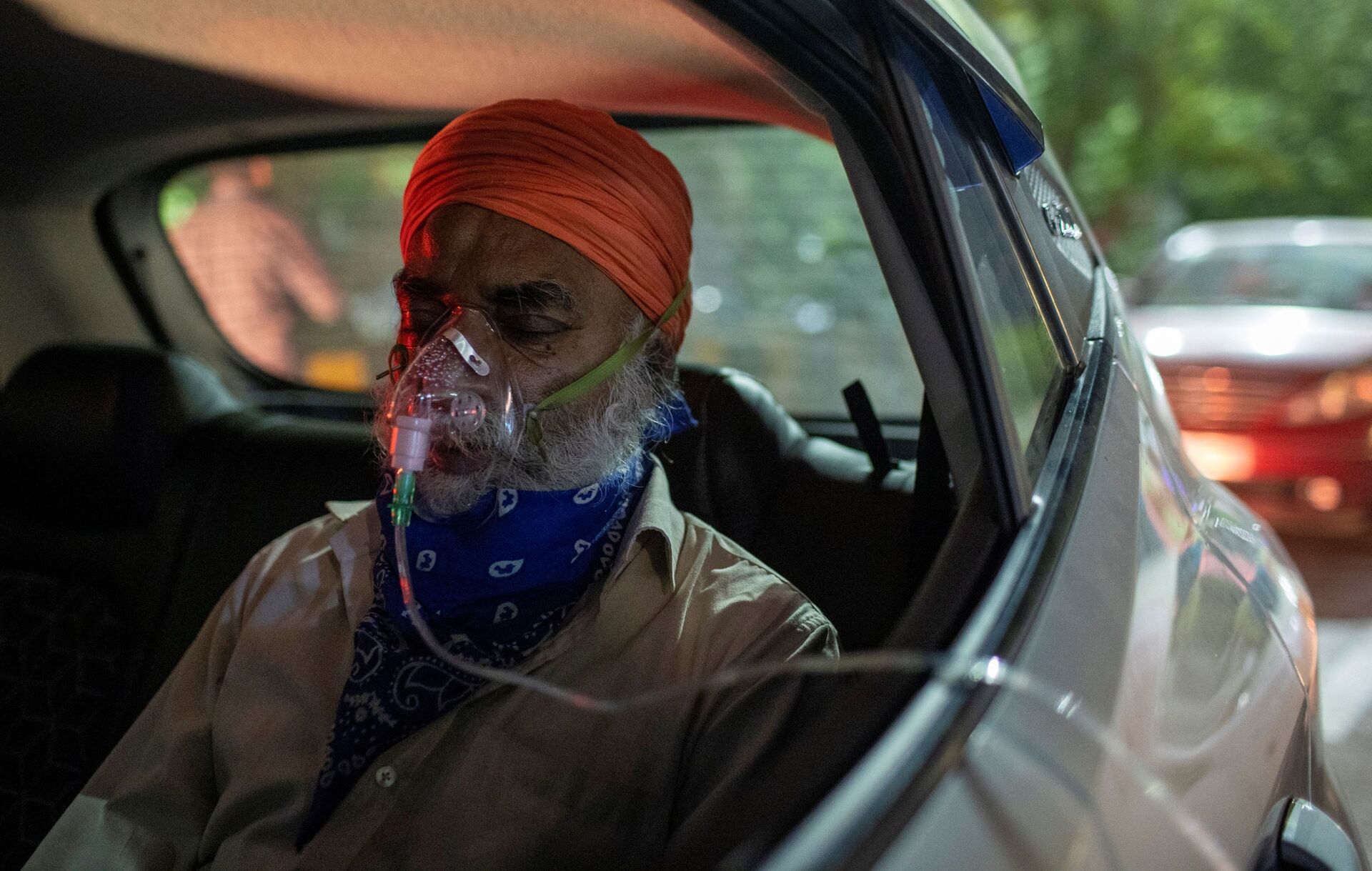 A man with a breathing problem receives oxygen support for free inside his car at a Gurudwara (Sikh temple), amidst the spread of coronavirus disease (COVID-19), in Ghaziabad, India, April 24, 2021.
© REUTERS / DANISH SIDDIQUI

'US Cannot Take India for Granted'

While the present US administration seems to be largely in line with their predecessor's strategy towards India, after the transition of power from the GOP to the Dems, India has seen much enthusiasm on Joe Biden's part about having India as a key strategic ally, the author suggests.

"Even though the Quad has been consolidated recently with the first summit virtually taking place in March this year, one can see the Obama and the Trump era warmth missing in Biden-Harris administration’s diplomatic outreaches to India," he says.

He also refers to a recent episode of USS John Paul Jones carrying out a Freedom of Navigation Operation (FONOP) west of India’s Lakshadweep Islands. The US Navy’s Seventh Fleet went through India’s Exclusive Economic Zone (EEZ) on 7 April without requesting the country's prior consent.

​The Seventh Fleet press release suggested that USS John Paul Jones' passage through India's EEZ was consistent with international law. On 9 April, India's Ministry of External Affairs (MEA) highlighted that "the Convention does not authorise other States to carry out in the Exclusive Economic Zone and on the continental shelf military exercises or manoeuvres, in particular those involving explosives, without the consent of the coastal state". It also "conveyed its concerns" regarding the episode to the government of the US through diplomatic channels.

Since the US can’t take on China, the bully, looks like for the next few years, it is trigger happy to show its might in Indian land, sea & air. From Rihanna to Meena to USS John Paul Jones, all unauthorized interventions are welcome. Of course, we will keep “expressing concern”.

​While New Delhi and Washington continue cooperation, including within the Quad framework, the US can’t take India for granted, the journalist insists, stressing that India is maintaining ties with a wide range of global players based on the principles of mutual aid and respect.