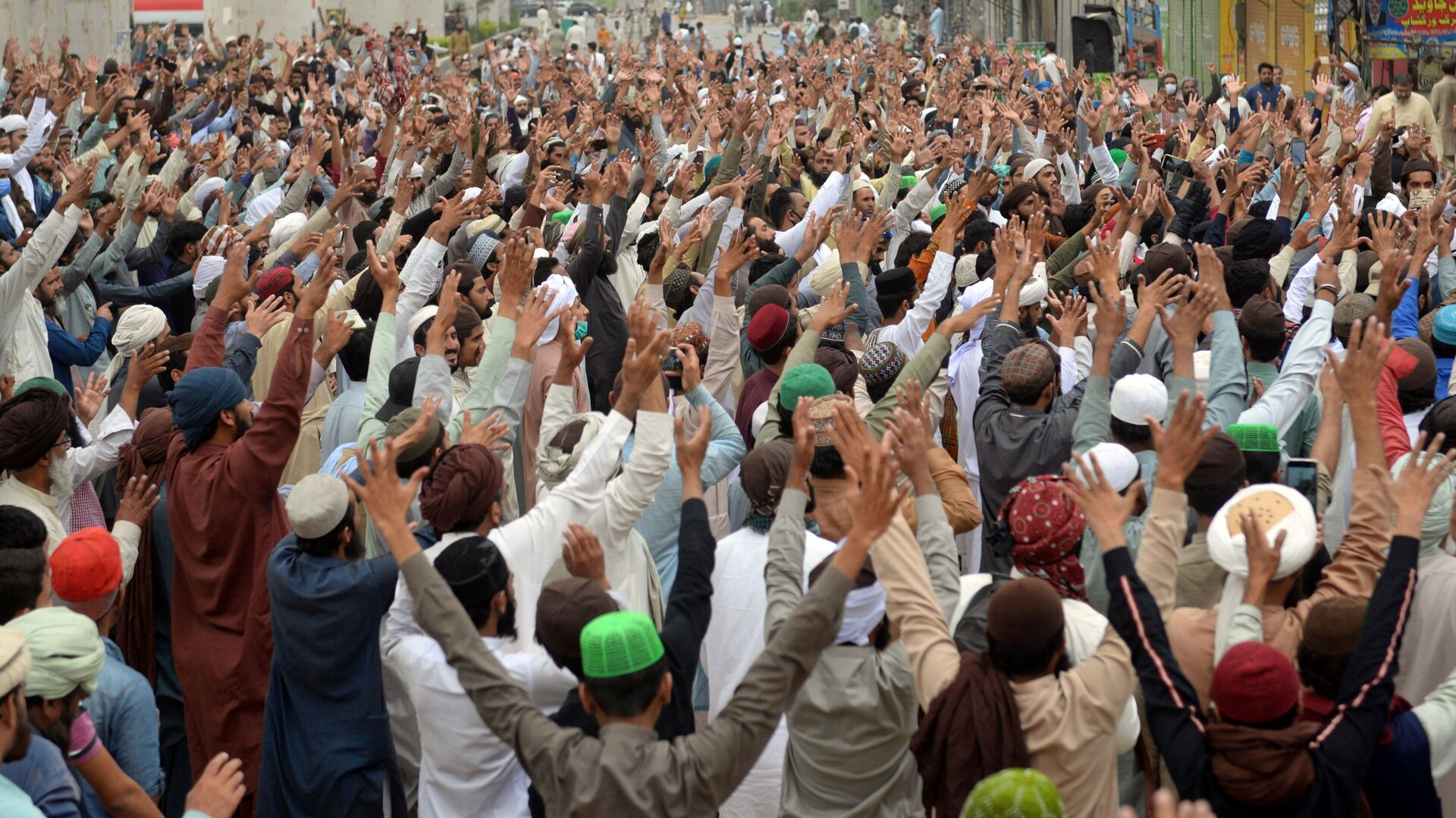 Dhairya Maheshwari
All materials
Just days after Pakistan's government banned the radical Islamist outfit Tehreek-e-Labbaik Pakistan (TLP) under its "anti-terrorism law", authorities have opened negotiations with the hardline group, as per the Interior Ministry. The TLP on Monday released 11 Pakistani policemen it had taken hostage during a showdown with the security agencies.

Several videos of "Pakistani soldiers" as well as members of the police force appearing to back the radical Islamist group Tehreek-e-Labbaik Pakistan (TLP) have surfaced online, as the showdown between the government and the TLP continues in the South Asian country.

Pakistan Army in rebellion mode against Imran Khan after several radical TLP protesters killed by police and security forces in Pakistan during protests. A soldier of the Pak Army asks Army Chief in a public video to ask Imran Khan to control his ‘dogs’ (Police) or face action. pic.twitter.com/zq0E7YrXw1

​In one of the videos, a soldier seems to call upon Pakistan's powerful military chief General Qamar Javed Bajwa to rein in the police, accused of attacking TLP activists, who have been carrying out anti-France protests in the country over President Emmanuel Macron's defence of the magazine Charlie Hebdo re-publishing caricatures of the Prophet Mohammad last year.

In another video, scores of police personnel are seen ostensibly joining the ranks of the TLP amid cheers by the Islamist hardliners.

The anti-France protests in Pakistan have spanned several weeks across major cities, with the TLP calling for the expulsion of France's Ambassador to Pakistan Marc Barety as well as a boycott of French products and businesses. The TLP's deadline for expulsion of Barety expires on 20 April.

The French mission in the country last week advised the country's citizens and businesses to leave the country in the face of threats by the hardline supporters of the TLP.

"Due to the serious threats to French interests in Pakistan, French nationals and French companies are advised to temporarily leave the country", said an email from the French Embassy, as cited by AFP.

Faced with violent protests by Islamist hardliners, Pakistani Prime Minister Imran Khan said over the weekend that the group had been banned by the authorities under the "anti-terror law" for indulging in street violence.

Let me make clear to people here & abroad: Our govt only took action against TLP under our anti-terrorist law when they challenged the writ of the state and used street violence & attacking the public & law enforcers. No one can be above the law and the Constitution.

​Khan, however, also hit out at western politicians whom he accused of hurting the sentiments of Muslims across the world by "disrespecting" the Prophet Mohammad.

Six policemen were killed and over 600 injured in a four-day security operation by Pakistani security forces to flush out TLP supporters from the cities, as per reports.

The four-day operation, which concluded on Friday, also resulted in the deaths of TLP activists.

Meanwhile, 11 Pakistan police personnel held hostage by the TLP in Lahore were released on Monday, the Interior Ministry said.

The security personnel were taken hostage by the TLP after police stormed an Islamist stronghold in Lahore on Sunday, resulting in the deaths of three activists.

Allama Muhammad Shafiq Amini, a TLP leader, said in a video statement after Sunday's clashes that the outfit won't bury its dead supporters unless its demand for expulsion of the French ambassador was met.

Sunday's violence also led to the beginning of negotiations between the government and the TLP, Interior Minister Sheikh Rashid Ahmed said.

Announcing the completion of the "first round" of negotiations on Monday, Amini said that a "second round" had also begun, refusing to spell out the details of the agenda of the next round of talks.