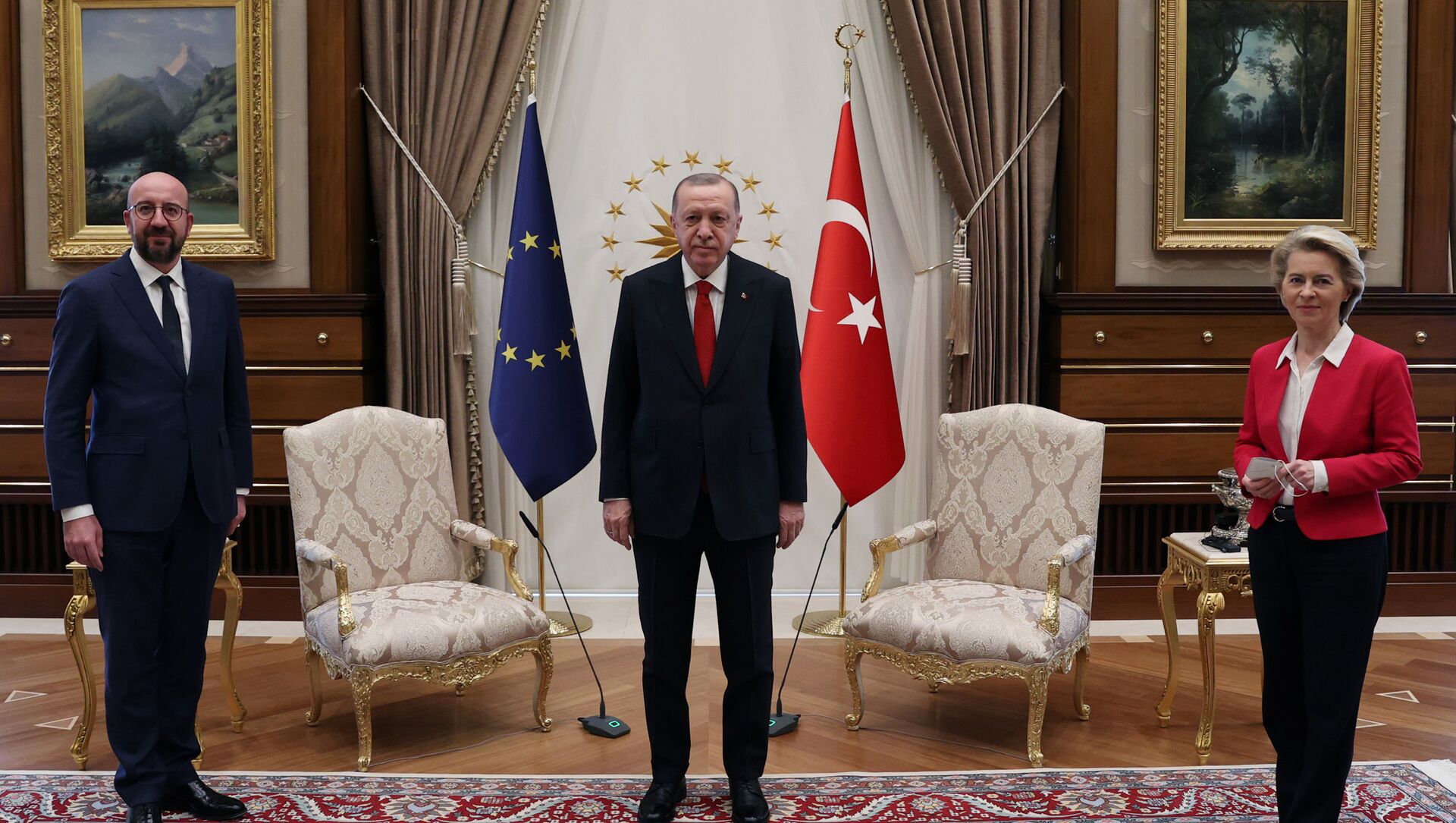 Andrei Dergalin
All materialsWrite to the author
While some netizens have criticised the way von der Leyen was treated during the meeting, others have cracked jokes instead.

While Erdogan and Michel sat on the only two chairs available, Von der Leyen ended up with no other option but to park her backside on a sofa opposite Turkey's foreign minister.

After an EU press briefing with Turkish President Recep Tayyip Erdoğan, EU Chief Ursula von der Leyen was forced to park her backside on a sofa because the only available seats were taken by the Turkish president and president of the European Council pic.twitter.com/kRoTtJQKw6

​"The president of the commission was clearly surprised," said European Commission spokesman Eric Mamer as quoted by AFP, arguing that von der Leyen should have been treated "exactly in the same manner" as Michel. "She does consider that these issues are important and need to be treated appropriately, which they clearly were not."

A Turkish official, however, told the media outlet that "no arrangements were made other than those requested by a preliminary EU delegation which prepared the visit."

As news of this development spread on social media, many netizens commented that the EC president should have been offered a chair by the men present, while the hashtag #sofagate sprung up on Twitter.

Charles Michel fault for sitting down when he should have gestured to her.

She was allowed to be in the same room with the men, so it was a clear success *sarcasm*

Doesn’t matter if the 3d chair omission was sexist, political or an honest mistake.

It’s still a missed opportunity for @eucopresident to do the right thing: Stand by @vonderleyen and wait until an extra chair is brought. #SofaGate #GiveHerASeat #CharlesMichel #vonderLeyen pic.twitter.com/v4OSl2afbh

What a macho world! @eucopresident had 2 options to reply with a strong message to Erdogan & to underline how important #equality really is for #EU:
a) get up & offer the seat to @vonderleyen
b) sit next to Von der Leyen on the couch#SofaGate pic.twitter.com/P9A5UXjdEQ

​Some offered possible explanations to what has happened.

​And there were also those who cracked jokes about the situation in question.

Actually there was a third chair...#SofaGate #Erdogan #vonderLeyen #BernieSanders pic.twitter.com/UqIWGSwq7r