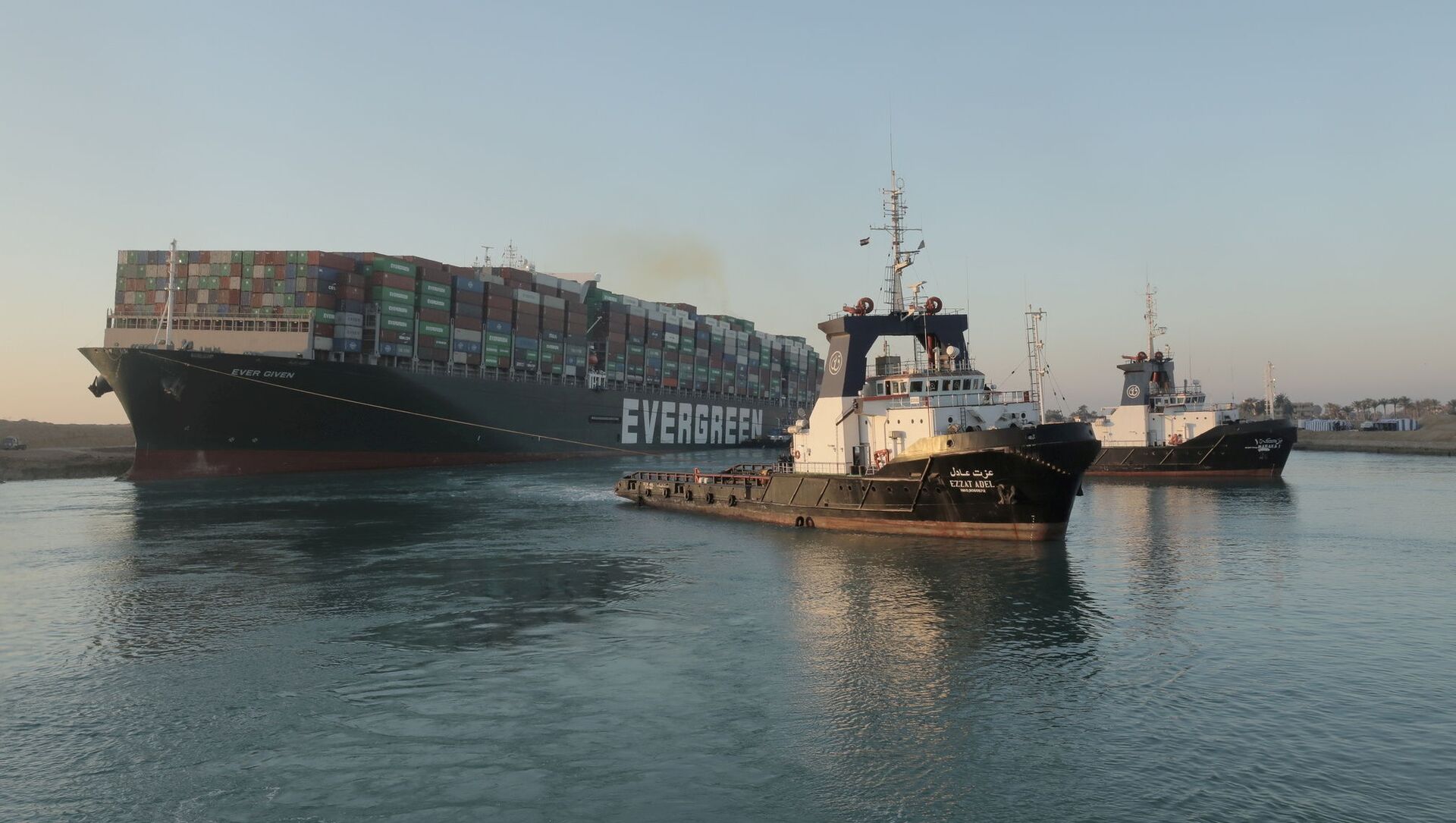 © REUTERS / HANDOUT
Subscribe
International
India
Africa
Chris Summers
All materialsWrite to the author
Egypt’s President Abdel Fattah al-Sisi has announced the successful completion of the operation to unblock the Suez Canal. The giant container ship Ever Given has been blocking the southern end of the canal for a week.

World oil prices have rebounded after news of the refloating of the Ever Green, a Panamanian-flagged vessel which got stuck in the Suez Canal on Tuesday, 23 March, while travelling from China to the Netherlands.

Admiral Osama Rabie, the head of the Suez Canal Authority, said on Monday 29 March the ship had been refloated at 4am local time and he added: “We would like to reassure the international navigation society as navigation shall be resumed immediately upon the complete restoration of the vessel’s direction and directing it to the Bitter Lakes waiting area for technical inspection.”

FREE. Video of Ever Given vessel fully floating freely in #Suez moments ago.

Navigation has RESUMED in Suez Canal, Egypt’s authorities say, after 6 days of blockage. Over 300 🚢 waiting to cross: pic.twitter.com/XvadPmb7d5

​The Bitter Lakes is a small inland sea which is used as a layby for vessels transversing the Suez Canal.

The Suez Canal website says 372 vessels are currently waiting to pass through the waterway, which gives ships a short cut on the way between Asia and Europe.

​There are also 11 ships bringing Japanese and Korean cars and other vehicles to Europe from the Far East or German, French and Italian cars to Asia.

Several shipping companies rerouted vessels around the Cape of Good Hope at the end of last week when they realised the Ever Given was not going to be quickly refloated.

But which ships are in the queue waiting to get through the canal?

The queue of ships waiting at the Mediterranean end of the Suez Canal, headed by the Nabolsi, a Lebanese livestock carrier pic.twitter.com/kyw6T2uiNo

​At the southern end of the canal the MTM Savannah, a 149-metre chemical tanker is at the front of the queue, sailing under the flag of Singapore.

The vessel has sailed all the way from Port Klang in Malaysia and is believed to be delivering chemicals to a customer in Europe.

Behind that is the Maersk Miyajima, a Panamanian-registered oil tanker which originated in Dar es Salaam, Tanzania.

Maersk, a Danish company, is one of the world’s biggest names in shipping and another of its vessels, the Maersk Aegean, a Singaporean chemical tanker which has come from the island of Reunion in the Indian Ocean.

Also waiting at the top of the Red Sea for the canal to be unblocked are the Maran Cassiopeia, a Greek-flagged oil tanker which is carrying 15,000 tons of crude oil from Fujairah in the United Arab Emirates to a customer in Europe, and the Morning Celesta, which is owned by Eukor Car Carriers.

The Morning Celesta is carrying around 4,000 new and used Daewoo and Hyundai cars from the South Korean port of Masan to Europe and north Africa.

In 2017 its sister ship the Morning Composer was hijacked by pirates off the coast of Libya.

Another Eukor ship, the Morning Laura, has been stuck for almost a week just north of the Ever Given’s position. The Morning Laura was travelling from the British port of Southampton to South Korea and is believed to be carrying Range Rovers, Jaguars and other luxury British-made cars.

The Ever Given was operated by Taiwan’s giant Evergreen corporation and another one of their container ships, the Ever Globe, was in the canal heading south when it found its path blocked by its sister ship. Its eventual destination is the Sri Lankan capital, Colombo, and it is carrying containers from Europe.

At the northern end of the canal, near Port Said on the Mediterranean coast, is another giant queue of vessels who heading from Europe towards Asia or the east coast of Africa.

They include the Nabolsi, a Lebanese ship carrying livestock. It is not known what its final destination is but it is likely to be Saudi Arabia, Pakistan or India. The Nabolsi is believed to be carrying live sheep from Spain, possibly for slaughter in halal abattoirs in the Middle East or the South Asian sub-continent.

Waiting off the Egyptian coast is the BW Kizoku, a Singaporean-registered LPG tanker which is heading south. It originated in the US city of Freeport in Texas.

Dozens more ships are queuing up in the Mediterranean, including the Dongbang Giant Number 8, a huge ship which is the maritime equivalent of a flat bed truck. It is able to carry huge turbines, ship keels and huge pieces of machinery.

It is not known what it is carrying but it left the port of Haifa in Israel and is headed for the port of Kaw Thaung in Myanmar.