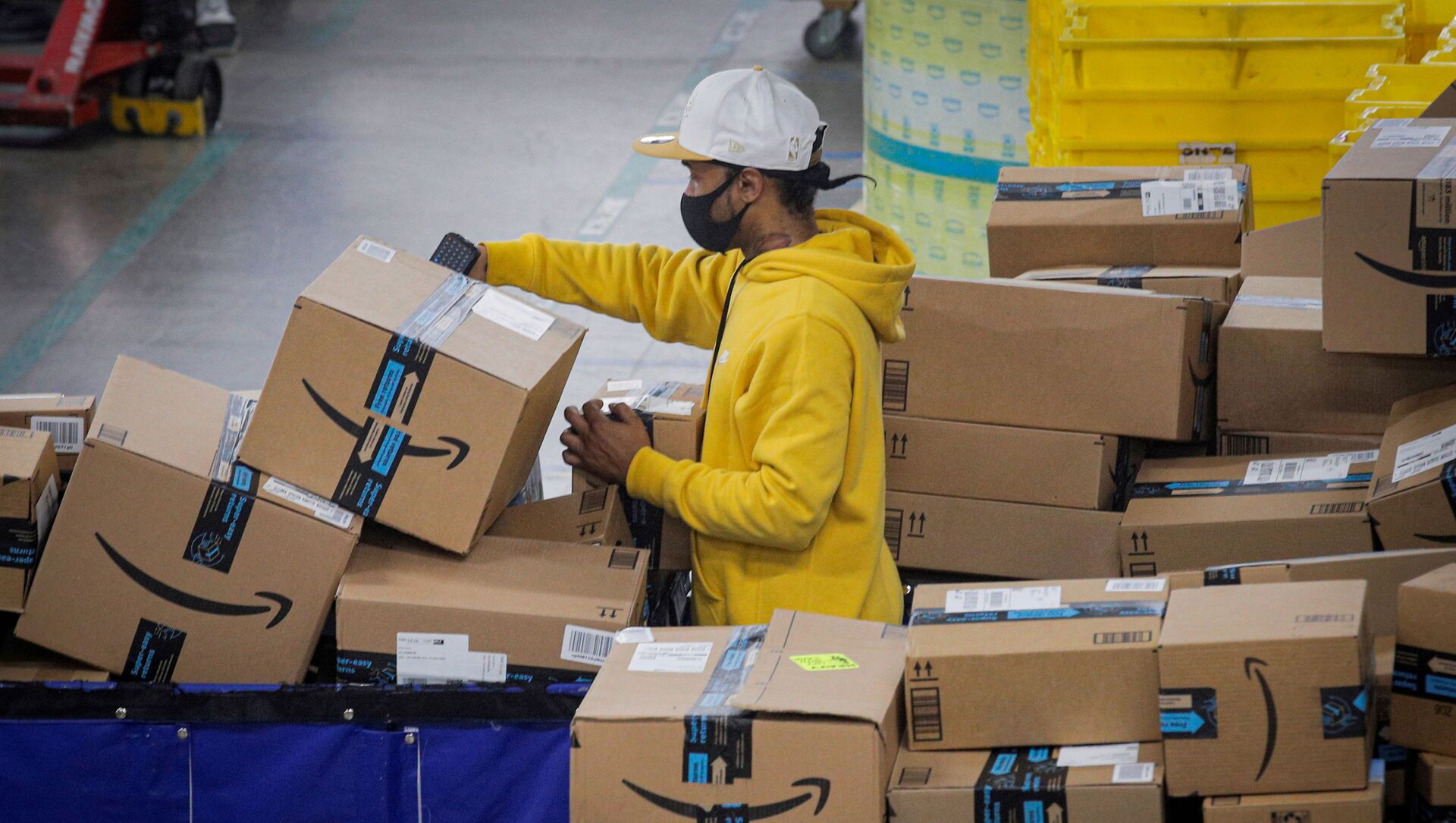 Morgan Artyukhina
All materialsWrite to the author
The latest push by Amazon workers to unionize comes amid unprecedented pressures created by the COVID-19 pandemic and as US lawmakers hotly debate the Protecting the Right to Organize (PRO) Act, the most powerful pro-labor bill in years.

Sputnik has learned that Amazon has implemented sudden and dramatic changes to its internal communications system that severely limit the ability of its lowest-level employees to interact with one another. The move comes as a historic and hotly contested union drive in Alabama enters its final week of voting, and labor experts have warned that meddling in the process is likely to backfire on the company.

In a move that caught thousands of employees off-guard last week, Amazon shifted its lowest-tier workers off the company’s primary internal social network and onto a totally separate network that only allows them to interact with their immediate superiors, two Amazon employees told Sputnik on Monday who asked to remain anonymous for fear of reprisal.

“You could speculate till the cows come home,’ one Amazon employee who works in IT told Sputnik when asked about why the shift happened without prior communication. “On the darker side, you can’t mobilize against something if you don’t know it’s happening.”

Amazon’s many thousands of employees have a variety of internal tools they can use to interact, but none was as far-reaching as Phone Tool, a social network that one employee told Sputnik is “basically an internal Facebook based on the corporate structure.” Phone Tool links workers’ personal profiles, allowing them to exchange information about each other professionally or socially and to network with other Amazon workers about common interests.

Last Wednesday, however, T1s and T2s, Amazon’s lowest-tiers of employees responsible for processing and “picking” for orders in the company’s huge warehouses, were suddenly unable to access Phone Tool and instead redirected to using another program called A to Z. An internal memo given to Sputnik that was distributed to T3s and above, who were not affected by the decision, lays out the company’s official rationale. 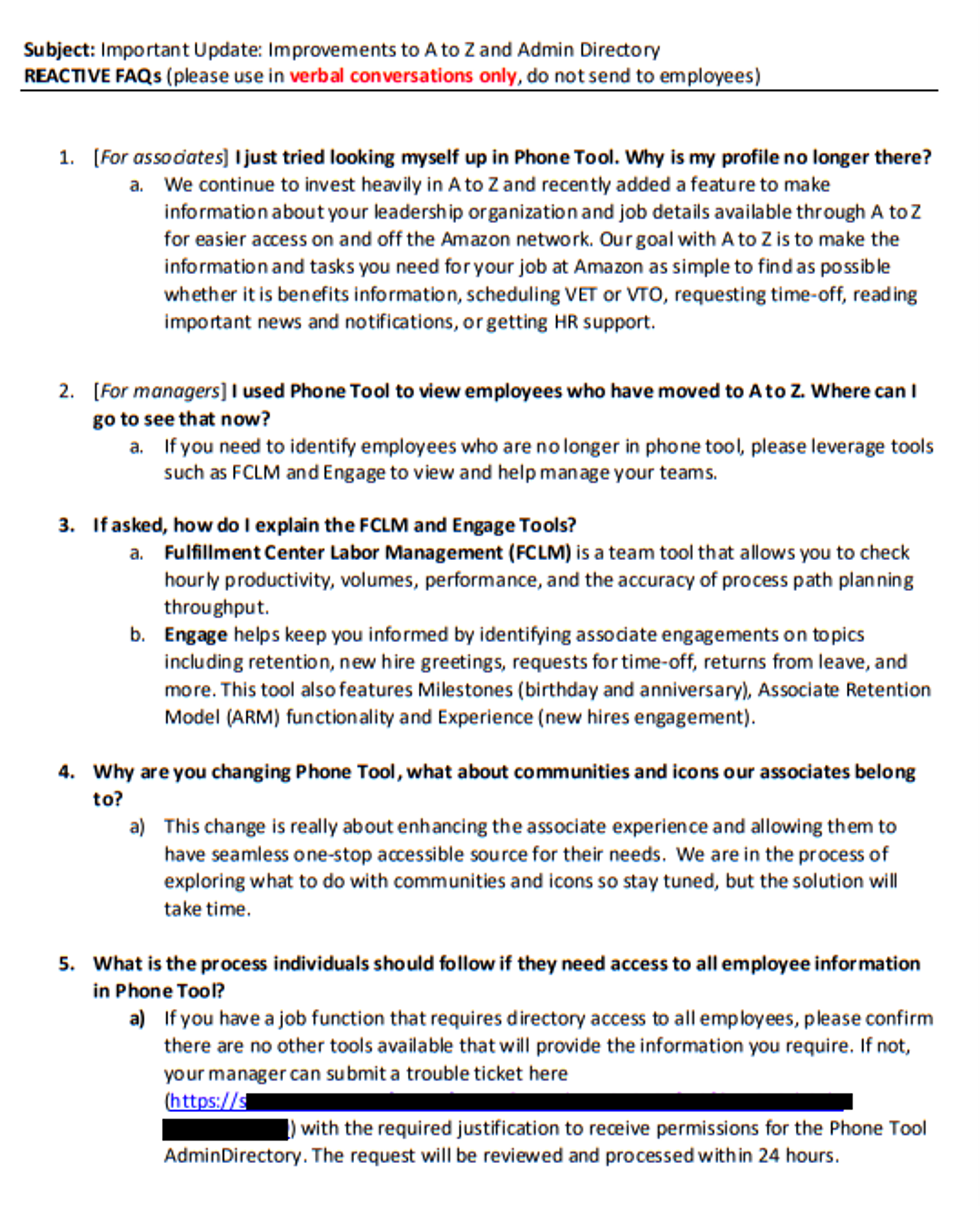 A talking points memo emailed to higher-up Amazon employees about the sudden removal of T1 and T2 associates from Phone Tool, the company's internal social network, on March 17, 2021.
© Morgan Artyukhina

“We continue to invest heavily in A to Z and recently added a feature to make information about your leadership organization and job details available through A to Z for easier access on and off the Amazon network. Our goal with A to Z is to make the information and tasks you need for your job at Amazon as simple to find as possible whether it is benefits information, scheduling VET [voluntary extra time] or VTO [voluntary time off], requesting time-off, reading important news and notifications, or getting HR support,” the talking points memo says, noting: “Please use in verbal conversations only, do not send to employees.”

One Amazon employee Sputnik spoke with estimated that half a million employees were affected by the move, or roughly the total number of new hires in all of 2020, according to the company’s fourth quarter earnings report. However, the IT worker Sputnik spoke with estimated T1s and T2s could be 80% of the staff in a given facility. Amazon has roughly 1.3 million employees in total, having grown dramatically in the last year.

Amazon did not reply to requests by Sputnik for a comment.

The move has sparked widespread outrage and confusion in the company. Internal communications shown to Sputnik reveal a pronounced disconnect between the problems leadership seems willing to admit have occurred as a result of the shift and the litany of troubles encountered by the T1s and T2s, as well as their superiors.

An IT manager who posted on the company’s internal ticket service asking for access to be restored noted that Phone Tool “is the source of truth for verifying associate information and leadership chains within the building. Restricting IT access as well as removing team contact data team members has caused a significant impact on multiple processes.”

The thread started by the post brought all types of Amazonians with tales of troubles caused by the change.

“This affects the moral[e] of the individual employee who is removed from [Phone Tool]. This is also used as a spot check to make sure employees are not accidentally moved to another manager, which happens frequently,” one commenter wrote. Another called it “a major disruption to our operations;” a third denounced the change as “utterly reckless and bizarre, the business impact is enormous.” 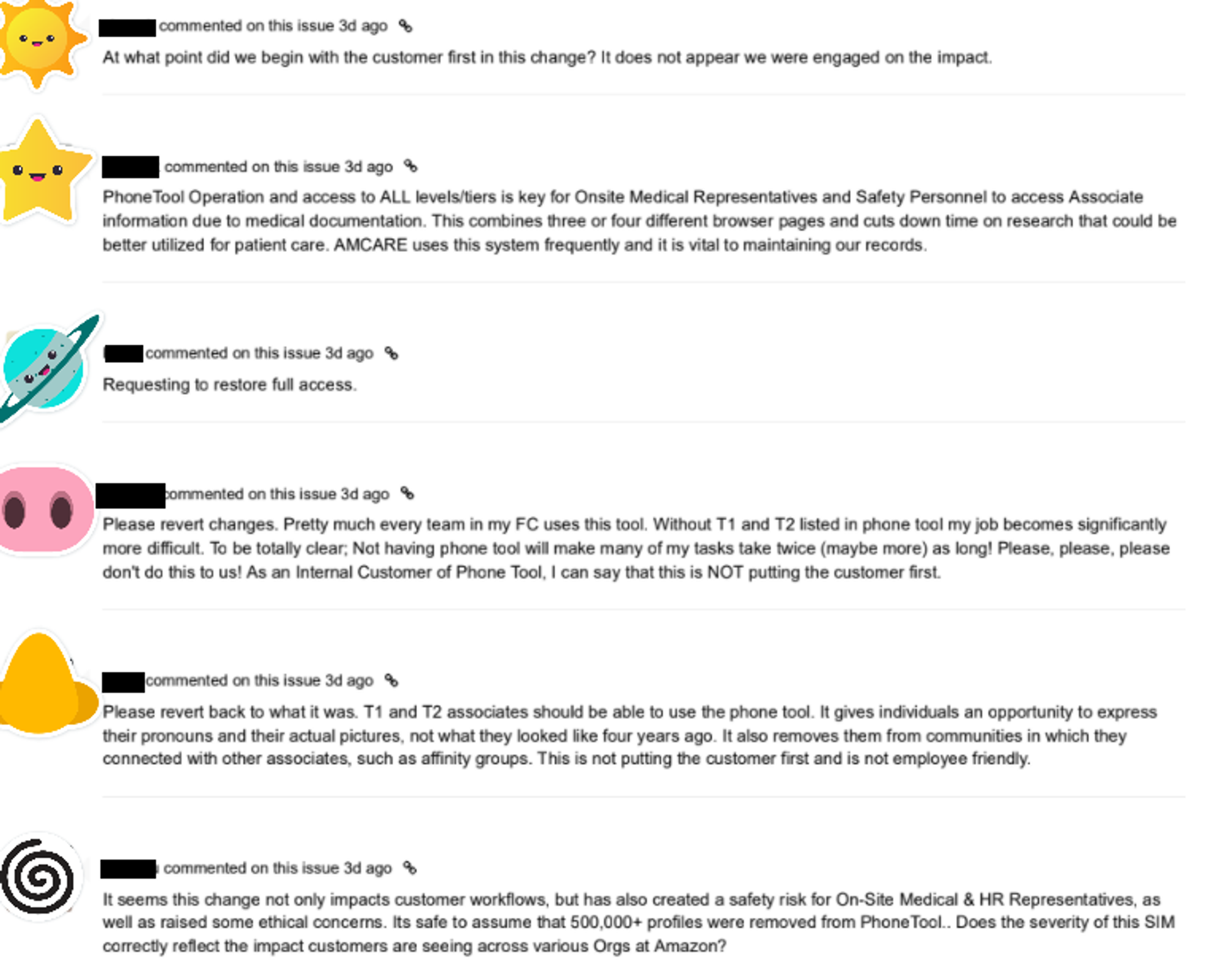 Screenshot from a thread on Amazon's internal ticket service that was given to Sputnik, showing Amazon associates complaining about the sudden shifting of T1 and T2 associates away from Phone Tool, the company's internal social network.
© Morgan Artyukhina

Training, loss prevention, security, medical care, interpretation services for deaf people, even telling if someone is still currently employed have all been disrupted and frustrated by the move, according to the workers’ complaints. Many also noted the problems created for trans and gender-nonconforming workers, who used Phone Tool to provide information about their pronouns and preferred name if it is different from their legal name.

One person who appeared to be an upper level manager eventually came into the thread, dismissing the complaints and telling associates that “The individuals this affects generally do not use Phone Tool, do not have laptops as part of their roles at Amazon, and do not use Amazon email.”

To this, one person replied: “If the individuals that this affects don’t use [Phone Tool] (citation needed) then why remove them from said platform?” Many others soon noted that in fact, T1s do use laptops and Amazon email on a daily basis and that it reflects poorly on management not to be aware of that prior to making the move. 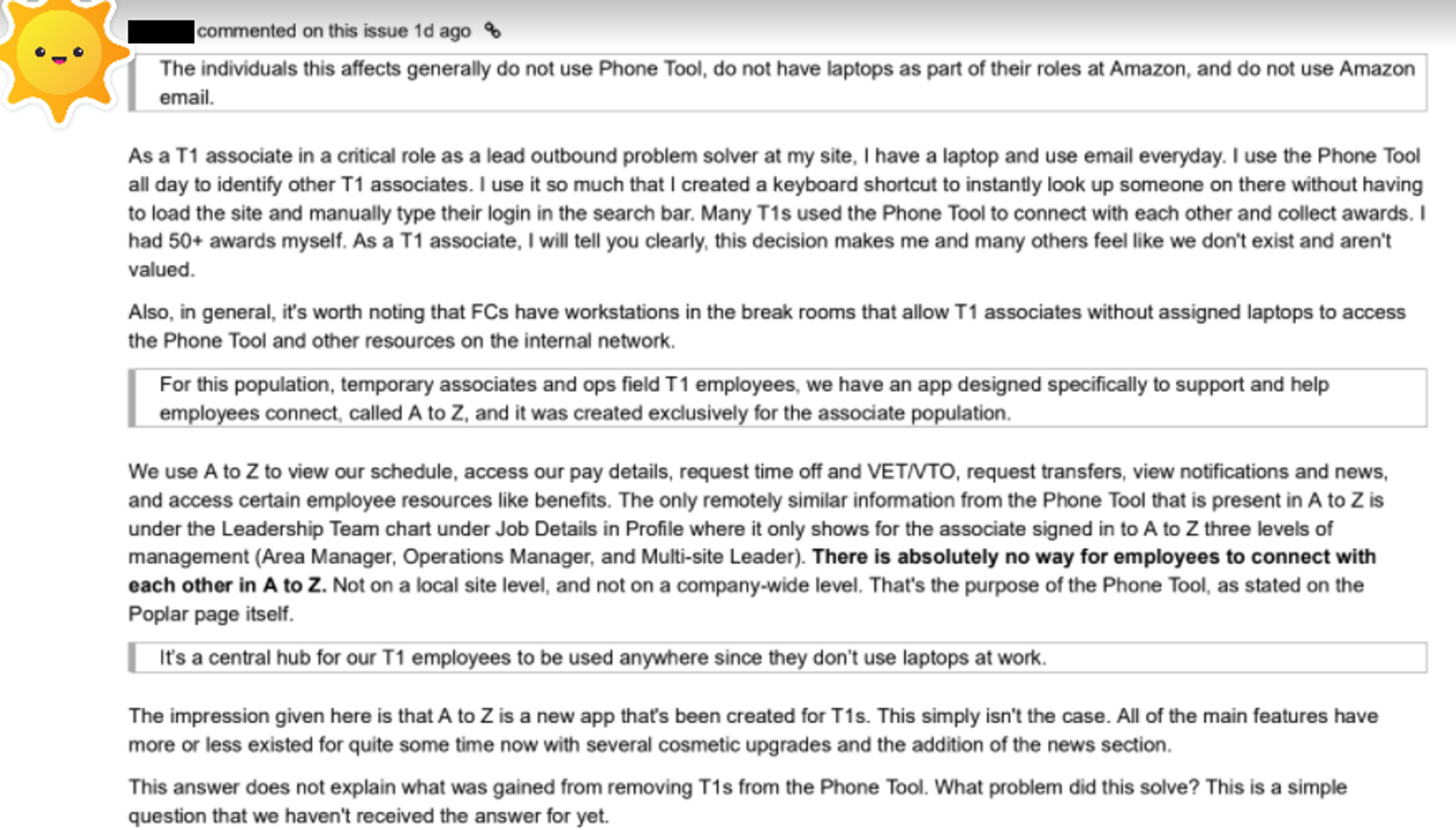 An Amazon employee, affected by the company's sudden shifting of T1 and T2 associates away from its internal social network, issues a line-by-line rebuttal of a manager's reply to complaints about the move on a thread in the company's internal ticket service. Image suppled to Sputnik by anonymous source.
© Morgan Artyukhina

One Phone Tool affinity group viewed by Sputnik that was attempting to push back on the move noted that it had “created a huge operational headache at many levels, not to mention a direct attack on the culture of inclusion at FCs [fulfillment centers] and similar sites. It became immediately clear that this decision was made without taking into account the impact it would have on the folks on the ground. After a year of lauding these associates as ‘heroes’ for working through the COVID-19 pandemic, they were surreptitiously wiped away from view.”

'A Form of Anti-Union Discrimination'

Amazon’s move comes amid a historic push by workers at a fulfillment center in Bessemer, Alabama, to become the company’s first workers to be represented by a labor union. Sputnik has previously reported on the hard-fought battle and the many tactics Amazon has deployed in an attempt to frustrate their organizing efforts. These have included daily texts warning of the alleged dangers of joining a union, adjusting the traffic lights outside the facility to minimize red light time during which activists can spread the word, and even offering them $2,000 bonuses to quit.

Last month, The Intercept revealed that Amazon had hired union suppression consultants from the Center for Independent Employees, a right-wing think tank bankrolled by the Koch network of Republican mega-donors, who they were paying roughly $3,200 per day - more than the average $15-an-hour Amazon worker makes in a month.

The Bessemer workers say they are organizing against many endemic problems faced by Amazon’s workers across the company, including unsafe working conditions, intense pressure to fill orders at a breakneck pace, low wages, and catastrophically low morale - all while CEO Jeff Bezos has collected historic profits and continues to be one of the richest men in the world. Many employees have noted that damaged morale would be a major effect of shifting T1s and T2s off of Phone Tool, because they would no longer feel like they are part of a team or that their hard work to earn badges was worth it. 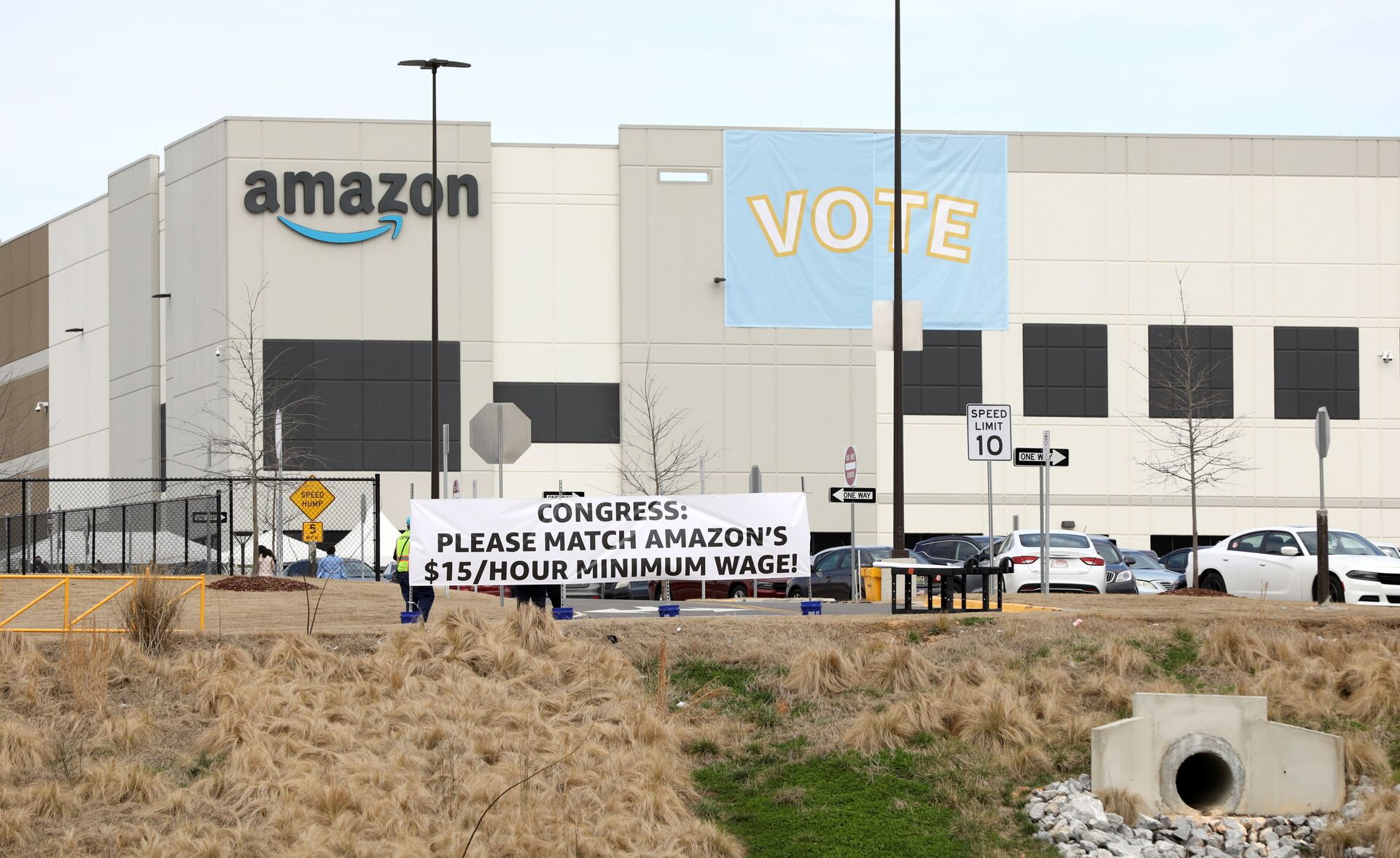 Banners are placed at the Amazon facility as members of a congressional delegation arrive to show their support for workers who will vote on whether to unionize, in Bessemer, Alabama, U.S. March 5, 2021.
© DUSTIN CHAMBERS

The Amazon employees Sputnik spoke with all said that, taken at face value, the move seems to be an attempt to frustrate the union drive by “prevent networking among those who would form a union: hourly warehouse associates.”

“I believe this represents both an illegal unilateral change in the terms and conditions of employment in violation of Section 8(a)(5) of the NLRA [ National Labor Relations Act] as well as a form of anti-union discrimination banned by Section 8(a)(3),” author and human rights & labor lawyer Dan Kovalik told Sputnik on Tuesday.

“This could result in a cease and desist order from the NLRB [National Labor Relations Board] as well as grounds for setting aside the election in the event the union loses that election,” Kovalik added.

Indeed, the National Law Review noted last week that employers should take note that “many not-so-obvious actions involving unions could be considered unlawful,” including interfering with a unionization effort.

The outlet notes that the NLRA considers it an unlawful labor practice for an employer “to dominate or interfere with the formation or administration of any labor organization or contribute financial or other support to it.” However, it also cautions that “cases of this nature are often highly fact-specific and assessed based on the totality of the circumstances.”

The mail-in voting for Bessemer workers on whether or not to be represented by the Retail, Wholesale & Department Store Union (RWDSU) ends on March 29.