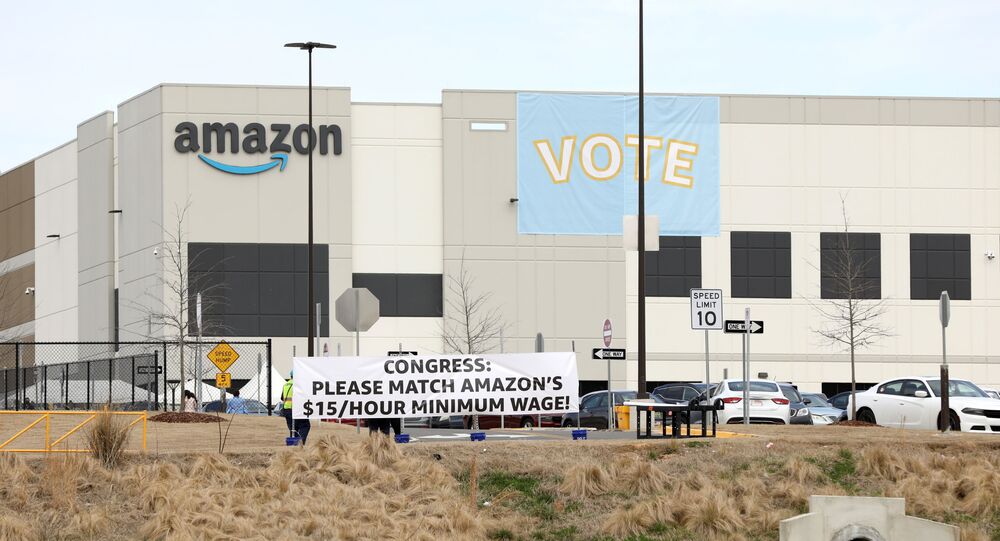 Amid a tense struggle between Amazon and the workers at its fulfillment center in Bessemer, Alabama, who are organizing a union drive, supporters have called for a one-week boycott of the company.

In the struggling former factory town of Bessemer, Alabama, a fierce struggle for what could become Amazon’s first labor union is underway. Amid the company’s persistent and wide-ranging attempts to convince the nearly 6,000 workers at the distribution center not to vote to be represented by the Retail, Wholesale & Department Store Union (RWDSU), sympathetic consumers have called for a total divestment from all Amazon products from March 7 through March 13 in order to put additional pressure on the company.

“From Sunday, March 7th to Saturday, March 13th, everyone is being asked to not use Amazon or Amazon Prime and do not stream videos using the Amazon Prime video service, “ reads a March 3 bulletin by UCOMM blog, the media group that handles communications for dozens of labor unions.

“For this to work it needs to be big, so share out the image above and use the hashtag #boycottamazon to let the company know that union members will not stand for this type of behavior,” they added. “For one week, unplug your echo dots, stay off Amazon Shopping and watch Netflix instead of Prime. The ask really isn't that big of an ask if you look at the bigger picture.”

Voting on the union’s formation began on February 8 and runs until March 29 via mail-in vote, which Amazon tried unsuccessfully to block.

Sputnik has previously reported on Amazon’s extensive efforts to block the union vote’s success and continue the company’s track record of having no unions in its facilities. These have ranged from daily text messages and propaganda in the company bathrooms to changing the timing of the traffic lights outside the facility to deny organizers time to distribute pro-union materials and even offering workers huge severance packages of up to $3,000 if they quit.

Picket in front of anti-union law firm Morgan Lewis’ office on 40th and Park in support of Amazon workers in Bessemer, Alabama: pic.twitter.com/t6rfiueYic

​Amazon has argued that a union has attempted to portray the union as out-of-towners, arguing the union would impose its own agenda on the workers and saying the union would come between the company and its workers, with whom it would prefer to deal directly.

A successful union drive would give workers at the Bessemer facility the power to negotiate collectively for better wages and safer working conditions - key concerns amid the COVID-19 pandemic, which has brought with it unprecedented demand for mail orders and even more intense pressure to maximize worker efficiency than existed before, which was already shockingly strict.

Last week, another Amazon worker committed suicide by jumping to his death while at work at a Las Vegas, Nevada fulfillment facility. A facility worker told NBC that despite their co-worker’s death, management forced the other employees to continue working for several more hours before allowing them to go home.

"That really upsets me," the worker told the outlet anonymously over fears they could be fired. "The managers knew what was going on and were going to the area but didn't send us home immediately. Someone just passed away. It just proves to me that managers at Amazon don't really care as long as they get their numbers done."

Suicide is a shockingly common concern at Amazon facilities: The Daily Beast found that 189 emergency calls relating to suicide were made between 2003 and 2018.

PSL Birmingham organizers had another successful weekend of community outreach with @RWDSU to build support and solidarity for the @BAmazonUnion! The community supports the workers! Worker rights are civil rights!

​The workers in Bessemer have also drawn attention to the incredible increase in profits collected by CEO Jeff Bezos in 2020: the billionaire saw his wealth balloon by $48 billion in just the first 6 months of the pandemic, and Amazon’s profits have increased by 84% in the last year.

In Bessemer, a former industrial town that has suffered tremendously since its iron mining and railcar manufacturing industries left decades ago, the workers’ struggle is winning wide support from both locals and national figures.

“Everyone in the community is cheering us on. It’s been that way since we got here,” lead union campaign organizer Josh Brewer told The American Prospect.

“We’ve had local people bring food and chocolate and coffee to the organizers. When I look at the notes that organizers send me, they tell me that workers are telling them, ‘It’s my grandfather I’m hearing from. It’s my uncle. It’s my neighbors. They’re saying to us, ‘You better sign the union card. It’s the way you assure your future and make sure Amazon pays you well,’” he said.

“This is the most important election for the working class of this country in the 21st century,” Levin said, addressing workers in the central Mississippi town. “This is the biggest election in the south in a generation.”

​US President Joe Biden has also lent his voice to the effort, posting a video on Twitter last week hailing the right of workers to organize.

“Workers in Alabama – and all across America – are voting on whether to organize a union in their workplace. It’s a vitally important choice – one that should be made without intimidation or threats by employers,” Biden said. “Every worker should have a free and fair choice to join a union.”

On Monday, Biden also voiced his support for the Protect the Right to Organize (PRO) Act, a bill presently in Congress that in Fox News’ words “would crush right-to-work laws” that ban agreements between employers and unions requiring non-union workers in a shop to financially support union efforts on their behalf.