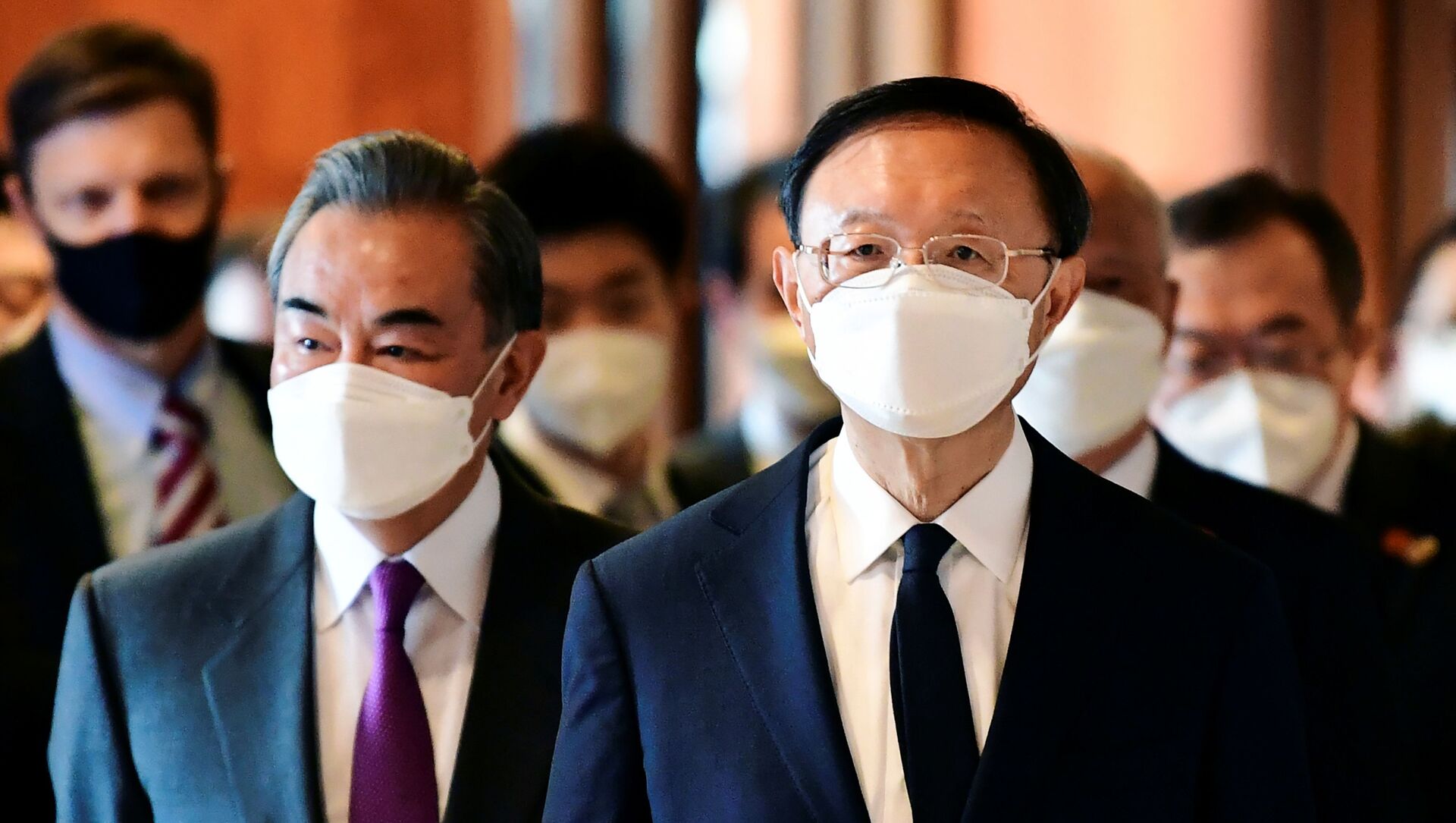 Morgan Artyukhina
All materialsWrite to the author
The Biden administration's first summit with China, being held in Alaska, has seen the two sides competing over how their relationship will proceed, with Washington assuming an offensive position including new sanctions, while China has sought dialogue but refused to back down.

After the second and final day of talks in Anchorage, Alaska, Yang Jiechi, the Communist Party of China's foreign policy chief, told reporters the talks were candid, constructive, and beneficial, despite the posturing.

"But of course, there are still differences," Yang told China Global Television Network, adding that "the two sides should follow the policy of 'no conflict' to guide our path towards a healthy and stable trajectory moving forward."

Yang further noted that both nations should follow policies of non-confrontation and avoidance of conflicts.

Chinese State Councilor and Foreign Minister Wang Yi, who accompanied Yang to the talks, told CGTN that their side had made clear to the Americans that China takes its sovereignty very seriously and warned them not to "underestimate China's determination to defend its territory, to defend its people, and maintain its righteous interests."

Washington has criticized China's security policies in Xinjiang and Hong Kong, where Western-backed separatist forces have created chronic unrest, as well as its longstanding claim to rule Taiwan, an autonomous island ruled by the Republic of China that lost the civil war in mainland China in 1949, when the socialist People's Republic of China was formed. The US technically recognizes Beijing's claim to be the sole legitimate representative of China, but in reality is the primary backer of the Taiwanese government. Beijing says all of these are internal matters and not of Washington's concern.

The Chinese delegation sharply criticized the hosting Americans during the first day of talks, accusing them of violating the meeting's protocols by speaking well over their time limit and using their opening statements to attack various Chinese policies. On the other side, US officials said the Chinese appeared primarily concerned with "theatrics" and "grandstanding."

US Secretary of State Antony Blinken in his opening statement accused China of "threaten[ing] the rules-based order that maintains global stability."

In response, Yang said China does not "believe in invading through the use of force, or to topple other regimes through various means, or to massacre the people of other countries, because all of those would only cause turmoil and instability in this world,” noting they are all things the United States does.

After the second day of talks, an unnamed senior US official told Reuters talks with China had given the US more information and "moved the ball forward," but noted there may be areas of potential cooperation with China, including in Korea, Afghanistan, Iran, and combatting climate change.

Going into the talks, Chinese Premier Li Keqiang urged the two sides to "have dialogue and exchanges based on mutual respect and equality," noting that "even if we cannot work things out anytime soon, such exchange of views will help boost trust and dispel misgivings." However, US State Department officials noted they did not see the Alaska summit as the beginning of a new mechanism or dialogue.