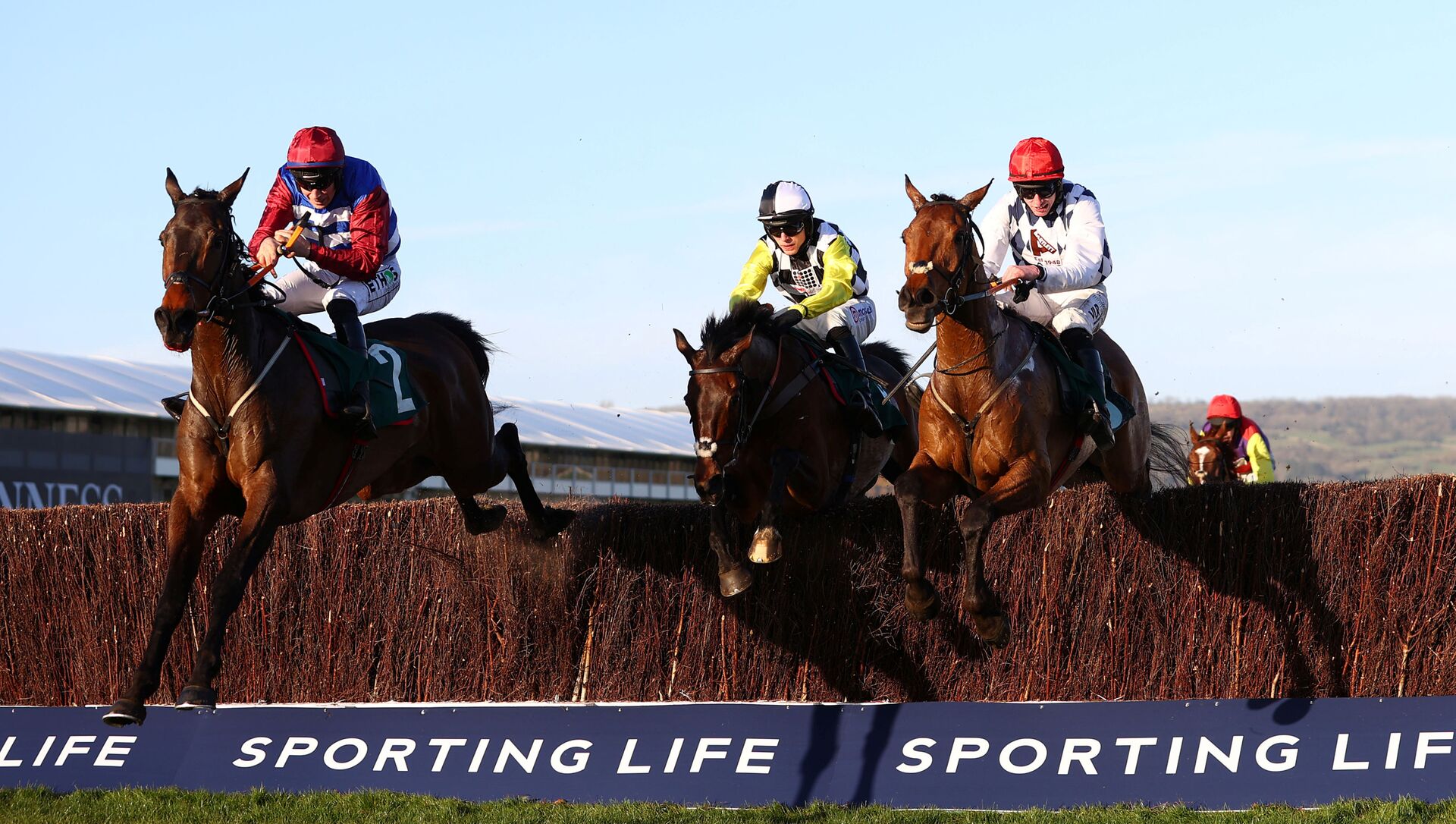 Neil Clark
All materials
The Olympics of National Hunt racing takes place in the scenic English Cotswolds this week, with four days of top class action. Who are the likely winners?

In 2020, our Sputnik Intelligent Punter's Guide to the Cheltenham Festival got off to a flying start on day one, with 16-1 shot Put the Kettle On among the winners, and it was the same again this year. What a day Tuesday was! Part One of my guide (which can be read here) pointed the way to winners at 28-1 (Vintage Clouds), 11-1 (Black Tears), 7-2 (Galvin) and tipped up the 1-2 in the Mares Hurdle and an 11-1 place in the Champion Hurdle. Let's hope we can keep the great form going for the rest of the week.

Here's a look at Wednesday's card- with tips for Thursday and Friday to follow.

The feature is the Queen Mother Champion Chase, due off at 3.05.  Chacun Pour Soir is the odds-on favourite and if he brings his Irish form over (he has won his last four races -including three Grade Ones, by an aggregate of almost 40 lengths), on his first run at Prestbury Park, he'll obviously be hard to beat. Last year, Put the Kettle On did us proud by winning the Arkle at 16-1 on the opening day and Henry de Bromhead's mare -who's 3-3 at Cheltenham-and receives a handy 7lbs sex allowance, makes plenty of each-way appeal again at 10-1. De Bromhead, who won yesterday's feature, race, the Champion Hurdle, has saddled two Champion Chase winners since 2011 and four placed runners.

The Willie Mullins-trained Gaillard Du Mesnil gets the vote in the Ballymore (1.20) . The five-year-old was eased towards the finish when winning a Grade One at Leopardstown last month. Mullins has won the race four times since 2008.

The Brown Advisory Novices' Chase (1.55) should also go to Mullins, courtesy of the very exciting Monkfish, who his trainer has said has the same potential as Florida Pearl and Al Boum Photo.  He's a odds-on shot (currently around 4-11) but is hard to oppose given his form this season and the fact he's a previous Festival winner (he won last year's Albert Bartlett).

We managed to get the one-two in the ultra-competitive Coral Cup (2.50) last year-amounting to a lucrative 60-1 forecast. Nicky Henderson has won the race four times since 2010, including the last two runnings. Of the quartet he runs this year, Birchdale is of particular each-way interest. The seven-year-old, having travelled well, didn't stay the 3m Albert Bartlett trip in 2019,  but in the Coral Cup last year wasn't beaten far in eighth and has 3lbs less on his back this time.  Another for the short-list is Grand Roi who looks to have been laid out for this and should appreciate the step up in trip.

Don’t Let the Cheltenham Racing Festival be the ‘Fall Guy’ for the UK's COVID-19 Failings
Two-times Grand National winner Tiger Roll is a racing legend, but having run lifelessly over the  course in November (when he was pulled up) his legion of fans will be quite nervous  watching him in the Cross Country at 3.40. If The Tiger does return to form and wins (and you could argue the 6-1 currently available is too big bearing in mind he's won the race twice before and has a great Festival record), it would be wonderful, but the main thing surely is that he comes back safe and sound.

Since 1998 only one horse has carried more than 11st 5lbs to victory in the The Grand Annual (4.20), but after a long period when horses carrying less than 11st dominated, six of the last seven winners have carried 11st or above to victory. On the 11st 1lbs mark, Us and Them seems to have the right weight, trends-wise, and he's actually 5lbs lower in the handicap than when a close-third in the race last year. The year before that he was 2nd in the Arkle at 14-1. Last year's winner Chosen Mate is 8lbs higher this time, but that is largely offset by jockey Jordan Gainford's 7lbs claim, so he can't be left out of each-way calculations either.

He's a short-priced 13-8 favourite, but Kilcruit, a very impressive last time out winner of a Grade 2 at Leopardstown, still rates the likeliest winner of the Bumper (4.50) for last year's winning Mullins-Townend combo. If you're looking for something at much bigger odds each-way with bookies paying four places, then Mullins' Cool Jet, a winner last time out at Thurles, and currently a 50-1 shot, might outperform his odds.

Three Grade Ones on the card today, starting with the Marsh Novices Chase at 1.20. Envoi Allen, a winner at the last two Festivals, looks banker material for this, with Chatham Street Lad, the runaway winner of a course and distance handicap in December, one for the each-way shortlist.

The Ryanair at 2.30 looks tricky, with many in with a shout, but perhaps the percentage call is an each-way bet on  Melon, who has finished second at the last four festivals. Last year, Willie Mullins' gelding only went down by a nose to Samcro in the Marsh novices chase, and on his penultimate outing he ran an absolute blinder to be a close-up third at 25-1 in a thrilling renewal of the Grade 1 Savills Chase at Leopardstown, only being beaten 2l by A Plus Tard, who is second favourite for Friday's Gold Cup.  Samcro himself, a winner at two previous festivals, can't be ruled out of the each-way equation at 12-1.

15 go to post in the Stayers Hurdle at 3.05 but while the 2019 winner and 2-1 favourite Paisley Park is respected, at the odds, the percentage call has to be an each-way interest on 11-2 shot Sire Du Berlais, who has yet to finish out of the frame in three previous runs at the Festival. In 2018 he was fourth in the Martin Pipe at 10-1, and in 2019 and 2020 he landed the Pertemps, over course and distance, last year doing so under 11st 10lbs, which was some performance.

At around the 10-1 mark, don't rule out another big run from last year's surprise winner Lisnagar Oscar. Rebecca Curtis' s gelding seems to perform better at Cheltenham than anywhere else, with form figures at the track of 2531- with the 5th coming in the 20-runner Albert Bartlett at the Festival in 2019.

There's a big field for the Kim Muir at 4.50, and finding the winner won't be easy.   One who should go well and could be overpriced is 14-1 shot Kilfilum Cross, who's been second in the race the last two years, but is now 3lbs lower in the handicap than twelve months ago. Not seen since mid-December, when he pulled up under a big weight at Ludlow, he looks to have been put away for another bid at this.

22 go to post in the Pertemps (1.55), a race won by the Irish for the last five years. Two for our shortlist are The Bosses Oscar and Mrs Milner. The latter was only beaten a neck in a 3m race at the track in November and could represent a bit of each-way  value around the 12-1 mark.  Seeing that trainer Gordon Elliott won this race for the past three years, including with the top weight last year, you have to respect The Bosses Oscar. Now in the care of Denise Foster after Elliott's ban, the six-year-old was running on strongly at the end of the Fred Winter at last year's Festival but was hampered and didn't have a clear run at a crucial stage.

In the Paddy Power Plate (3.40), an each-way bet on Farclas is the recommendation. The seven-year-old won the Triumph Hurdle at the 2018 Festival and looks to be coming to the boil nicely since returning to action after a 522-day break in November 2020.

Willie Mullins has landed all five runnings of the Mares' novices hurdle (4.15) but the question is- which of his quartet has the best chance? At the prices, probably the percentage call is an each-way play on 7-1 shot Gauloise , ridden by Paul Townend.

The highlight of the final day is the Gold Cup (3.05 ) in which Al Boum Photo bids to make history by becoming only the fifth horse (after Golden Miller, Cottage Rake, Arkle and Best Mate), to win the Blue Riband event three years in a row. Although this year's renewal looks a better contest than 12 months ago, Al Boum Photo is taken to win again: he's had exactly the same preparation as when successful in 2019 and 2020 and we know for sure he stays every yard of the 3m2f trip. We know the 2018 winner Native River stays too, and while the old warrior is greatly respected, the race looks to have come a week to late for him ground-wise as conditions are drying all the time. Last year's staying-on second Santini can't be ruled out of each-way equations at 12-1 especially with his good course record, while his stablemate Champ, last year's RSA winner, would be a danger to all if his jumping holds up.

I'm old enough to remember the massive fields there used to be in the old Daily Triumph Hurdle(1.20), and when big outsiders like 66-1 shots Ikdam, Baron Blakeney and Shiny Copper routinely won, but because of the expansion of the Festival to include other races, fields are now much smaller and this year just eight go to post. The Gordon Elliott stable has won the race twice since 2014, and the yard (now run by Denise Foster after Elliott's ban) can strike again courtesy of Zanahiyr, who's won all three of his starts over hurdles.

Willie Mullins and Dan Skelton are the go-to men in the County Hurdle (1.55), between them they have trained seven of the last ten winners. Skelton relies on just the one entry this time, Third Time Lucki, who makes his handicap debut and has to go on our short-list. Mullins runs five, with the preference being for Ganapathi, ridden by last year's winning jockey Paul Townend.

The Albert Bartlett (2.30) is very competitive but the Mullins-Townend combo, successful last year with Monkfish, are taken to strike again courtesy of Stattler, who should have relished the 3m trip. At much longer odds, a good each-way option could be Pat's Fancy, who, as a 33-1 shot, was second over the same trip at the track back in December. Rebecca Curtis won the race with a 16-1 shot in 2014, and on-fire jockey Rachael Blackmore is booked to ride.

Billaway has a good chance of going one better than last year in the Foxhunters (3.40) with the Enda Bolger-trained Staker Wallace one for the each-way shortlist.

Ellimay should land the inaugural running of the Mares' chase at 4.15 for Willie Mullins. Her only defeat over fences came at the hands of Allaho, who ran away with the Ryanair yesterday.

After four exciting days at Cheltenham attention today shifts to Uttoxeter and the Midlands Grand National meeting where in addition to the main feature, there’s a great supporting card.

In the big race, due off at 3.35, our two against the field are Captain Drake, who was second in the race last year and the lowly-weighted Irish raider Screaming Colours.

Gustavian won comfortably over course and distance on his last outing and should run well again in the 3.00 while in the 2.25 St Barts catches the eye as the only ride on the card for three-times champion jockey Richard Johnson.

The subtitle of my biography of the  prolific author Edgar Wallace is ´Stranger than Fiction’ but it won’t be ´stranger than fiction’ if the horse ‘The Edgar Wallace’ wins the 4.10 as he’s a 15-8 shot and his form points to him winning soon.

Last year Glance Back won the 5.15 by 10 lengths and looks